LIKE MOST JAPANESE marques, Yamaha have some truly lovely UJMs scattered throughout their back catalog. Today, we’re taking a look at two of them: an SR500 and an XS500, both from Uwe Kostrewa at Hombrese Bikes in Cologne, Germany.

Both Yamahas are quintessential Hombrese builds; Uwe’s taste skews towards scramblers and trackers, and his bikes always have a pared down but well finished vibe. Both of these are personal projects, and each has its own backstory. 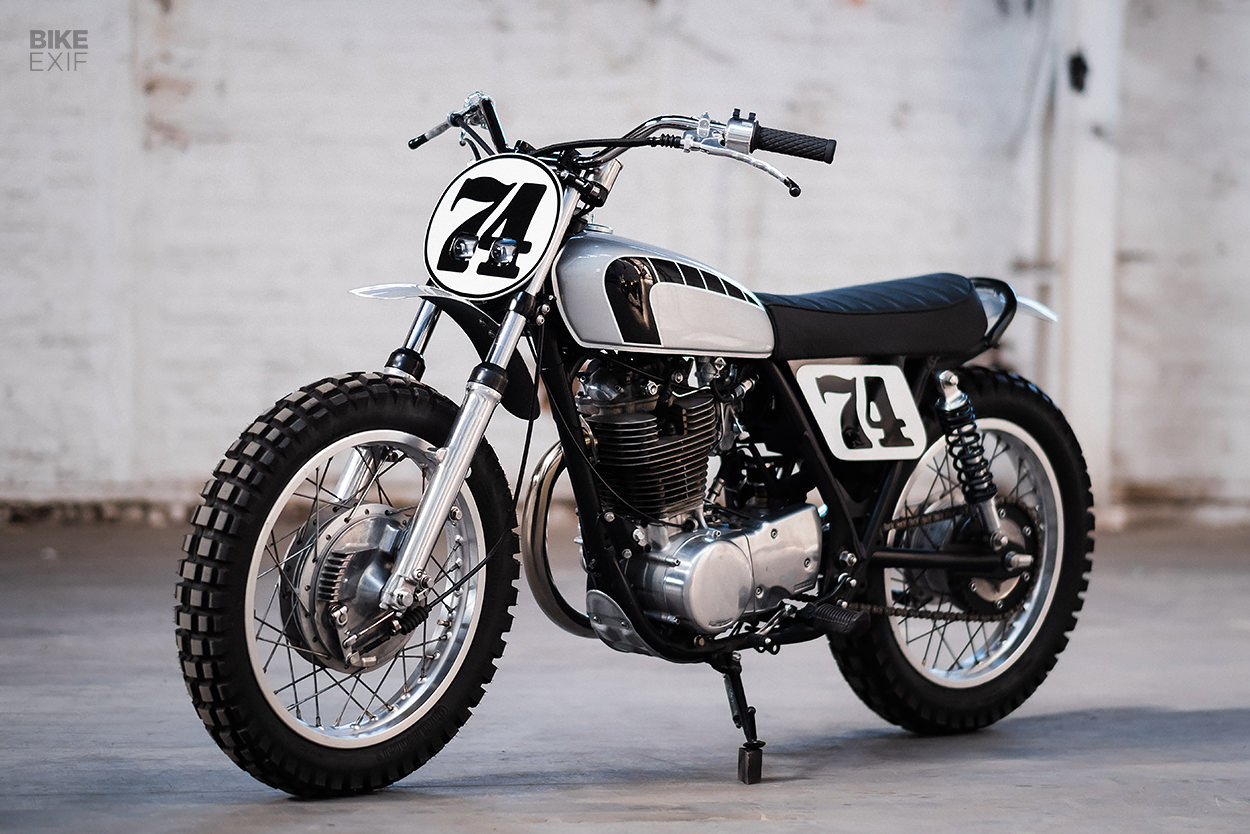 The 1989-model SR500 is actually one of Uwe’s early projects, recently redone. He originally turned it into a cafe racer—but it got neglected, and eventually faded into the back of the Hombrese workshop. “I didn’t ride it anymore,” Uwe confesses, “but I didn’t want to sell it either, because it was my first build project.”

“After many years I thought that it was too nice to just stand around. I wanted to get it back on the streets, but not as a cafe racer, because my hands ‘fall asleep’ too quickly in that riding position.” 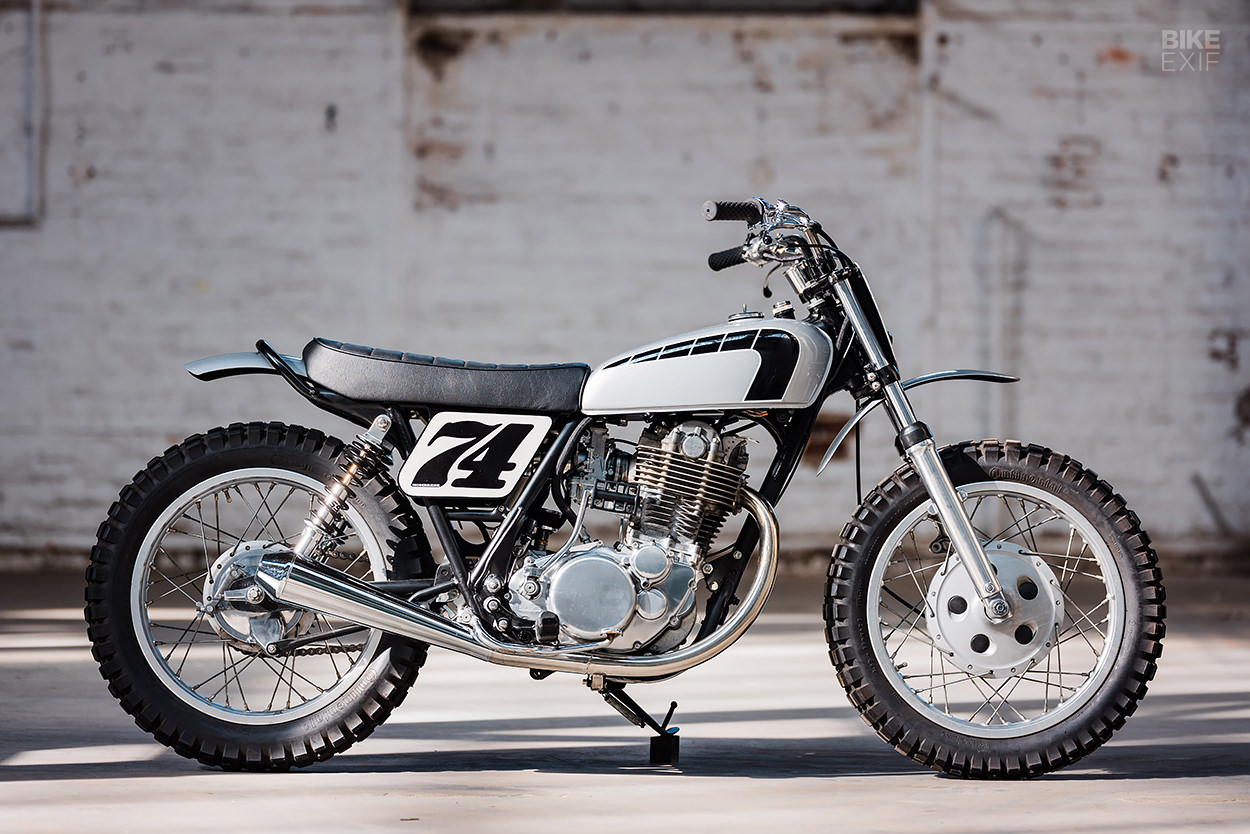 “As a big enduro, flat track and vintage fan, the desired direction was quickly determined: a mix.”

Uwe started with a few quick hits to sort out the stance and riding position. The SR500 got a set of custom-spec YSS shocks, new Wirth fork springs for the front, and a set of high and wide tracker handlebars. He also managed to source a drum brake hub for the front wheel, and laced up a pair of 18” rims with Continental TKC80 tires.

The original SR fuel tank didn’t fit the bill any more, so Uwe sourced a small Honda unit to replace it—but the Yamaha’s chunky oil-in-frame backbone was in the way. His friends at AMP Motorcycles came to the rescue, by building a new tunnel for the tank to make it fit.

Out back, Uwe cut and looped the frame, and then capped it off with an aftermarket fender. The front fender’s a custom aluminum part, shaped up on an English wheel by another friend. A chunky seat, and number boards at the front and sides, complete the bodywork. 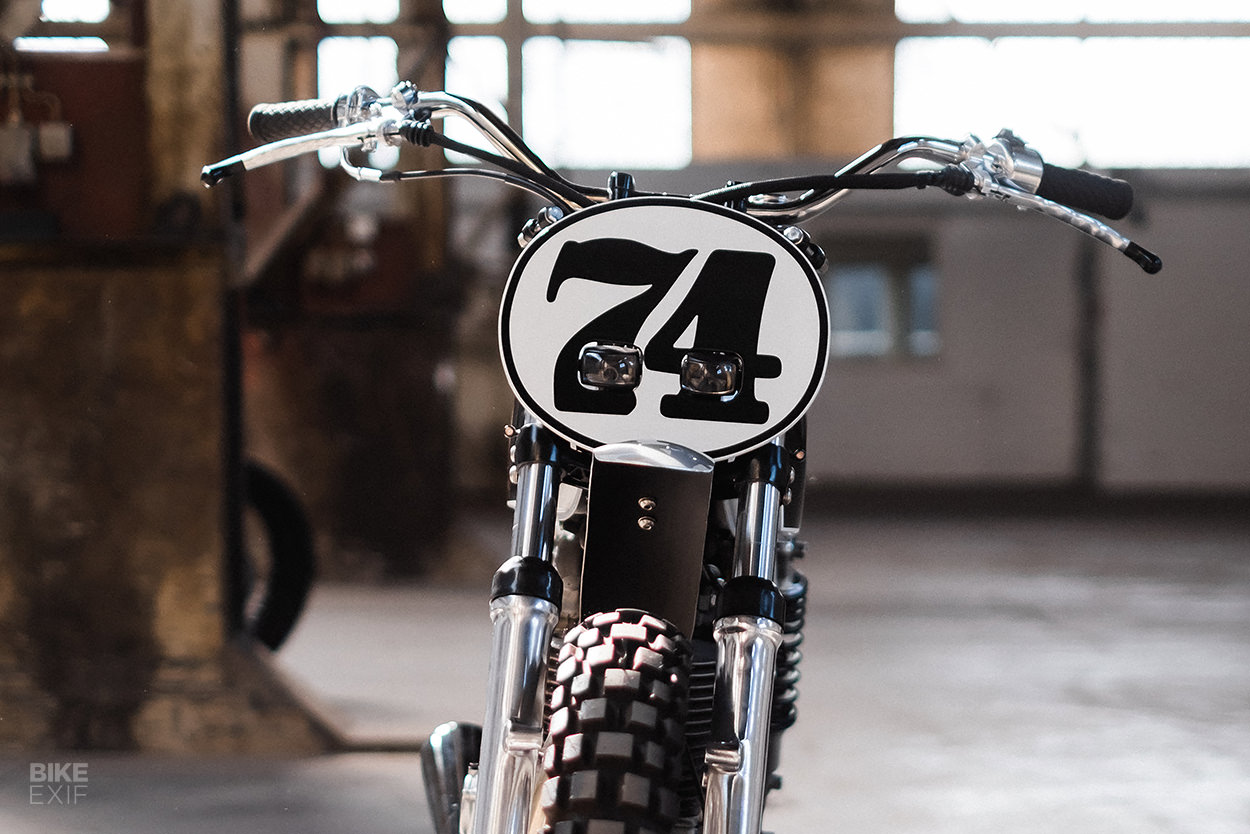 Uwe wanted the bike to look like an off-road-only enduro bike from afar, so he made the lighting as stealthy as possible. The ‘headlight’ is a pair of Highsider LEDs, tucked into the black parts of the ’74’ graphic on the front plate. And the rear is illuminated by a pair of Kellermann Atto LEDs—tiny turn signals that do double duty as taillights.

Finishing touches include an ignition relocate to the left side number board, and a classic reverse-cone exhaust.

The SR500’s silver paint job is inspired, and manages to hint at both the original SR tank graphic and Yamaha’s iconic ‘speed blocks’ at the same time. Uwe polished up the forks and bits of the motor to complement it.

“I don’t plan on going off-road with this bike,” he says, “but I wanted to bring the retro enduro style into town. It has become a little urban crosser—small and agile.” 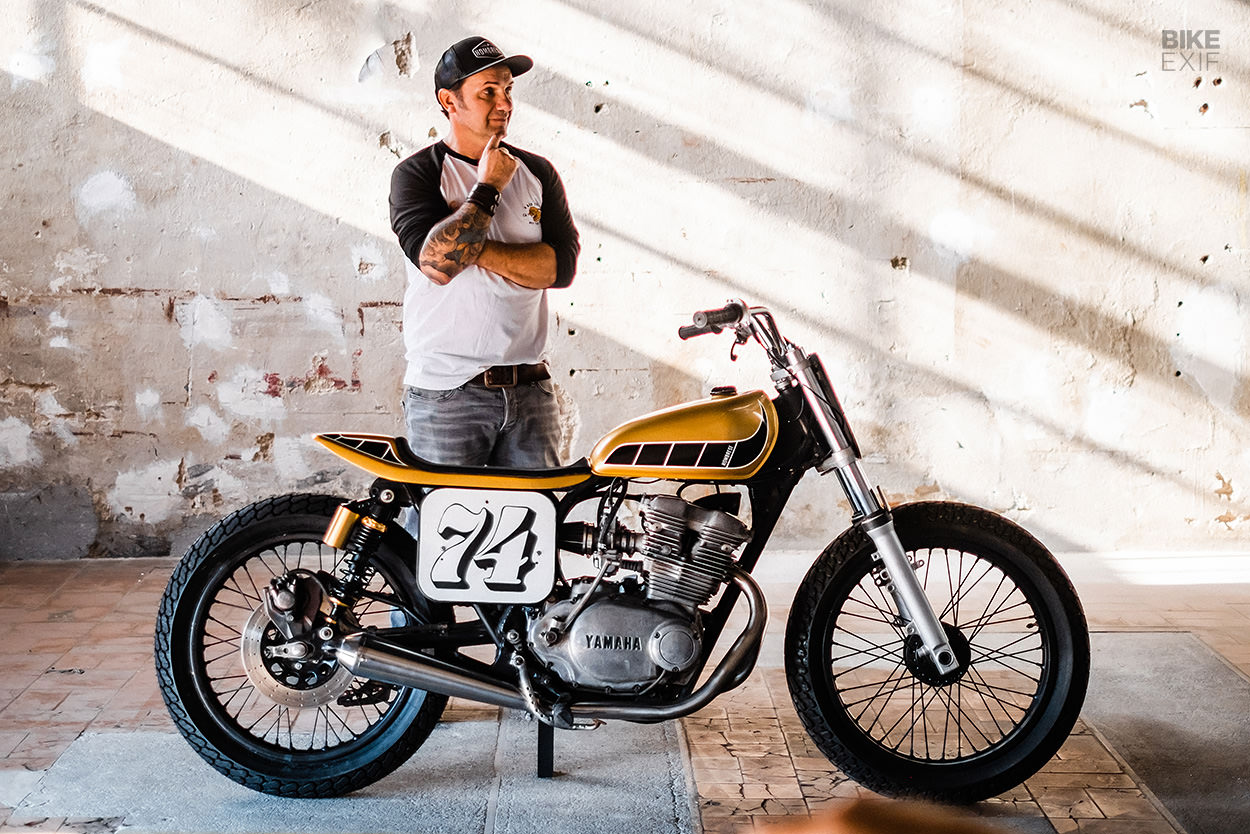 The 1974-model XS500, on the other hand, is a flat tracker through-and-through. And it’s sort of a work in progress too: Uwe bought it with some flat track-specific mods already done, and he has even more tweaks in store for it.

Some of the changes that the previous owner had done included a Yamaha R6 fork conversion, and an upgrade to a pair of tasty Mikuni flat-slide carbs. But the XS didn’t have the requisite 19” rear wheel—so Uwe sorted that out, and added a new set of Mitas dirt track tires. 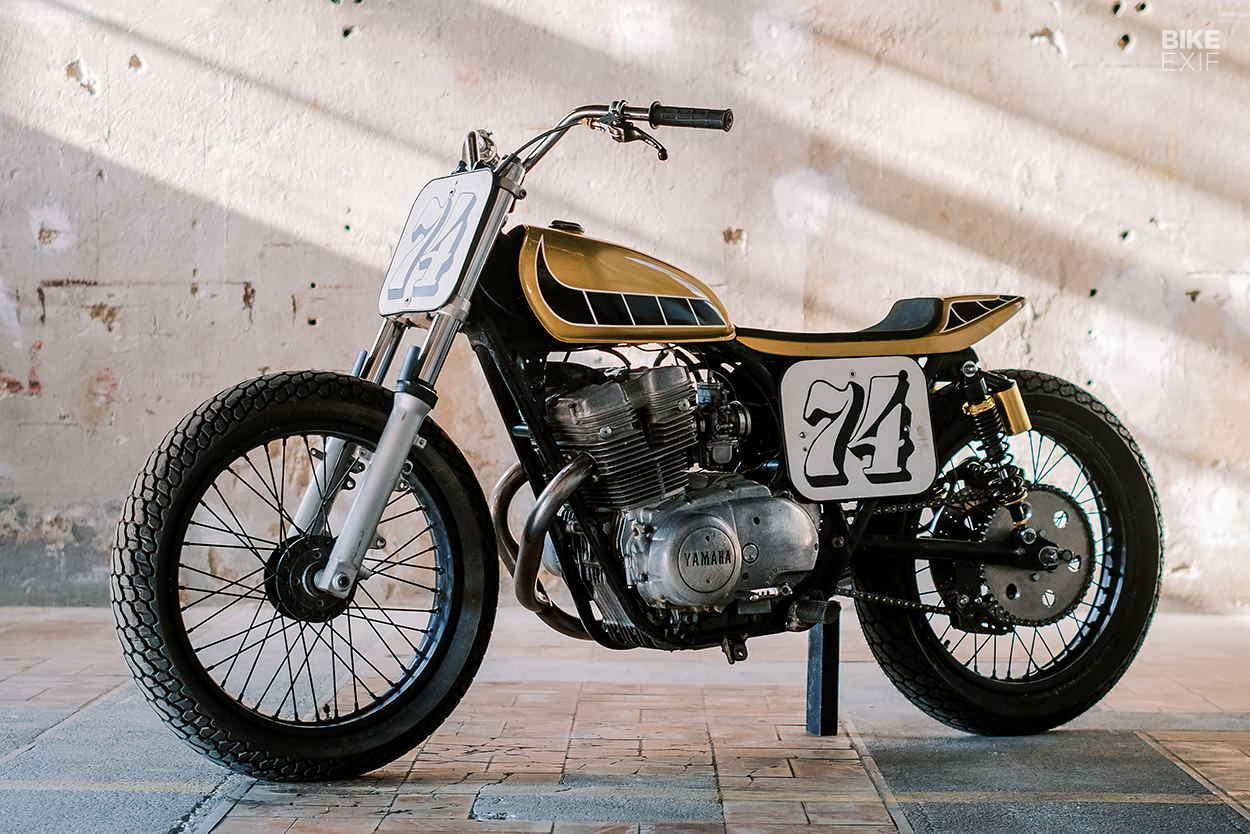 It wasn’t quite a plug-and-play affair though, since the back brake had to be modified to make space for the new rubber.

There was a lot of fine-tuning elsewhere too: Uwe deleted a few tabs on the frame, cleaned up the wiring, and ditched all the switchgear (except for the kill switch). He also installed a new set of rear shocks from RYF, and a set of chromed Tommaselli flat track bars. 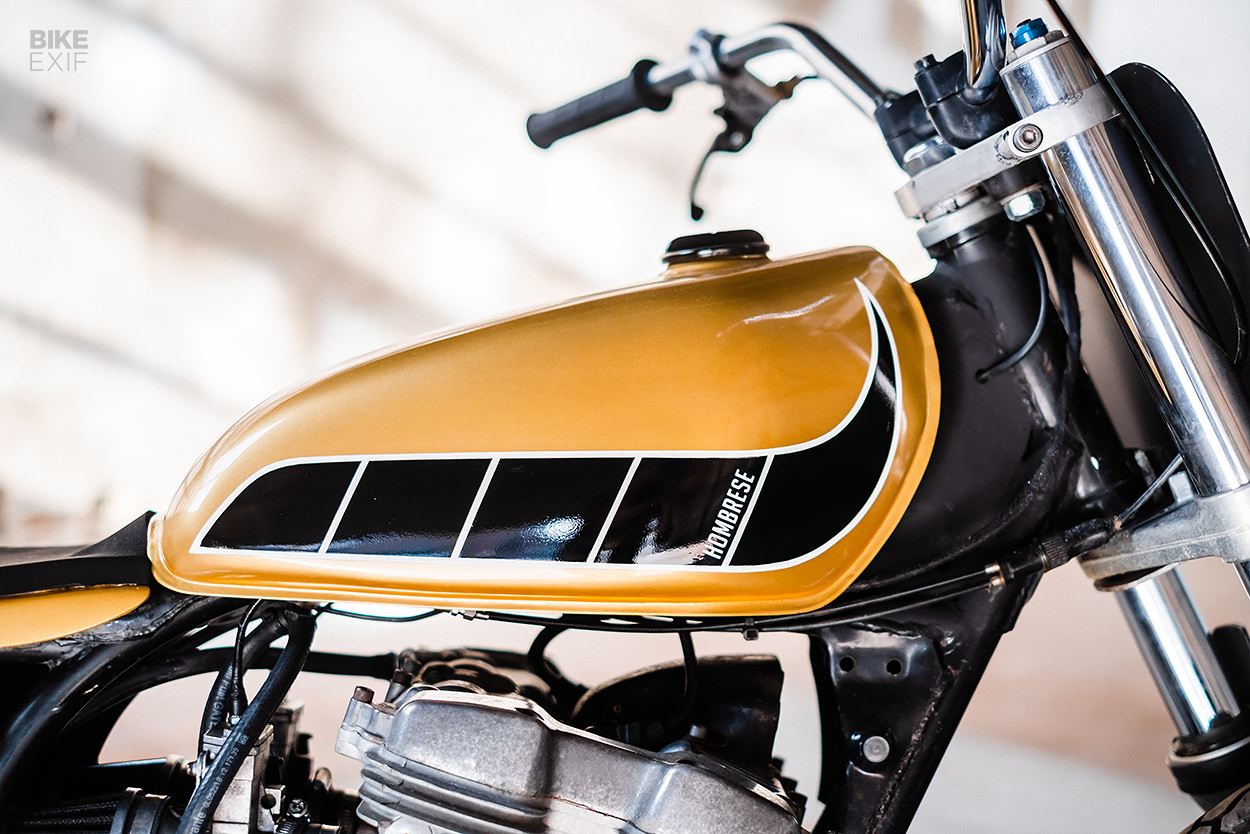 The look of the XS didn’t sit well with Uwe either, so this is where most of his effort went on this bike. First, he adapted a Honda XL125 tank to fit the Yamaha frame. Then he shaped up his own flat track tail piece out of fiberglass, and added number boards.

With that sorted, everything was wrapped in a stunning gold livery that looks far too good to get dirty. 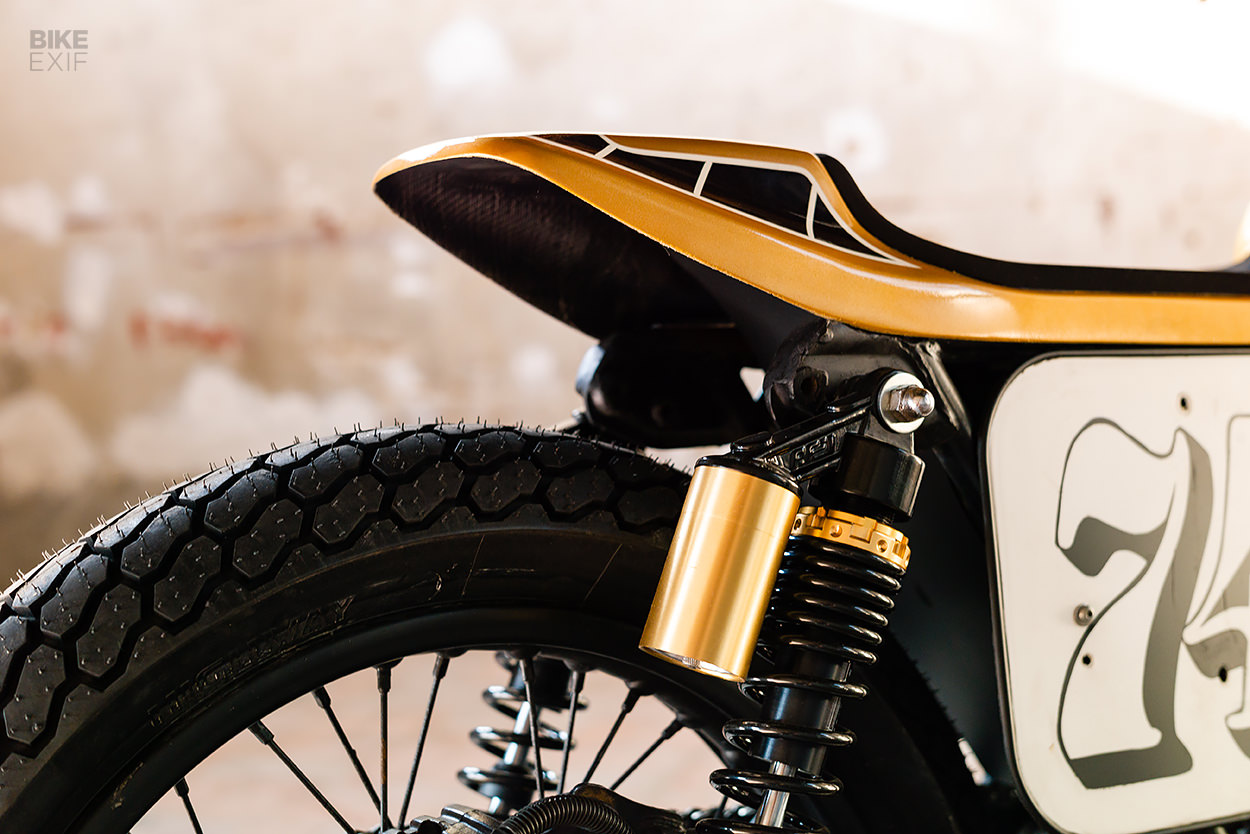 But the XS might not even make it onto a dirt oval. Germany is heading for winter, and Uwe has to figure out if he’s going to put this Yamaha back on the bench, move onto the next project, or focus on the flat tracker he’s building for his girlfriend.

Luckily he has the SR500 to ride in the meantime… at least while the weather still holds.