AT THE RISK of stating the obvious, some bikes are easier to customize than others. Pick a Triumph Bonneville or Harley Sportster, and you’ve got decades of knowledge to plunder on the forums. Choose a BMW R nineT and you’ll find lots of bits that come off without a grinder. And if you’ve got a Yamaha SR in your garage, there are literally thousands of parts available via Japanese online marketplaces.

If you want to make your life really difficult, though, a BMW GS is the bike for you. Even the early models are fiendishly complex, with oddball suspension systems and a massive spaghetti of wiring. So we’re giving top marks to Belgian builder Thomas Jeukens of Toma Customs, who has done a magnificent job on this BMW R1150GS Adventure. 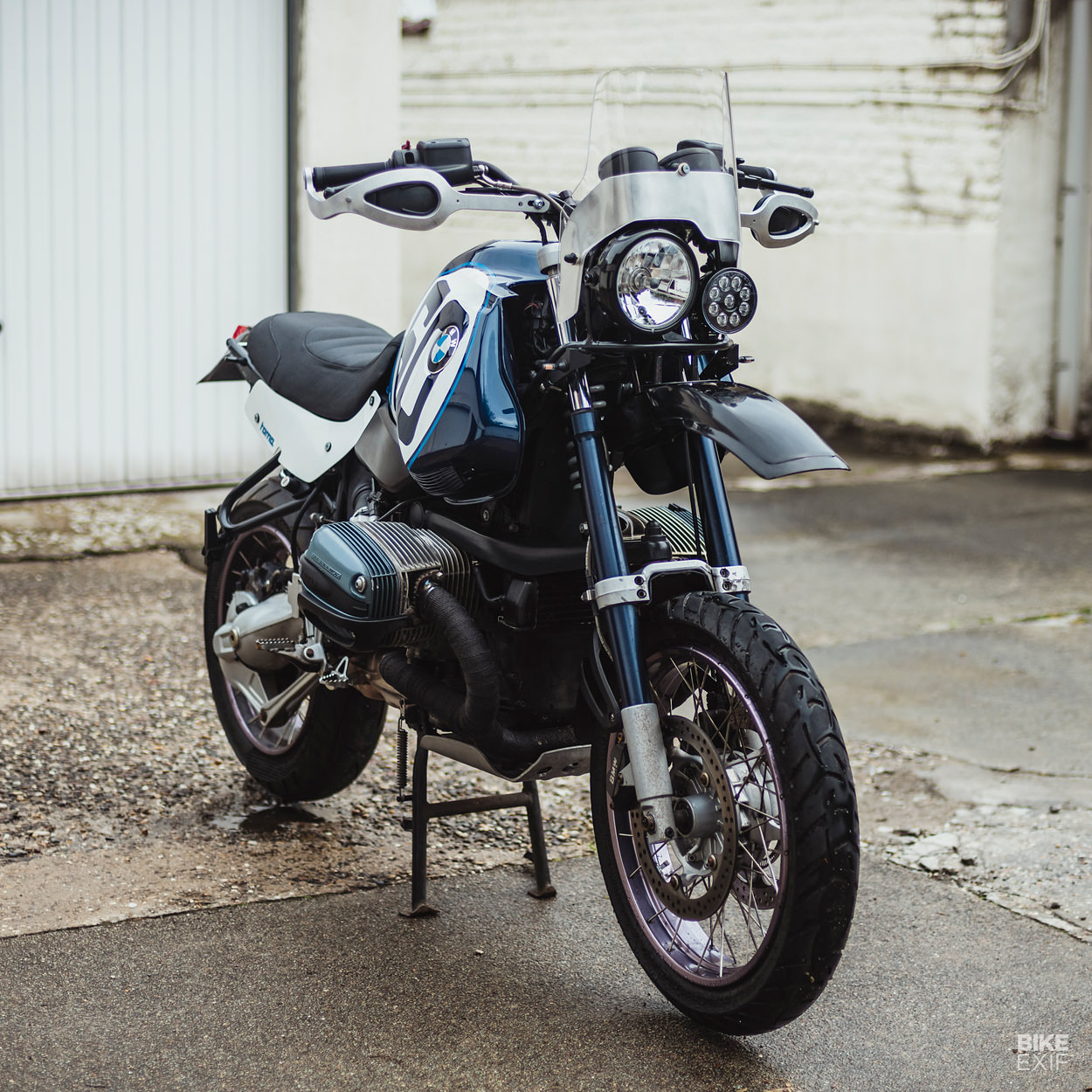 Just to make Thomas’ life more exciting, the build was commissioned by Bernard Cornut, a Belgian commercials producer who is also a passionate and experienced long-distance ADV rider.

Bernard is quite handy off-road and helped Yamaha run the ‘World Raid Tour’ that launched the Ténéré 700. He was riding alongside experts like 13-time Dakar Rally winner Stéphane Peterhansel and rising star Adrien Van Beveren, so he knows his stuff. 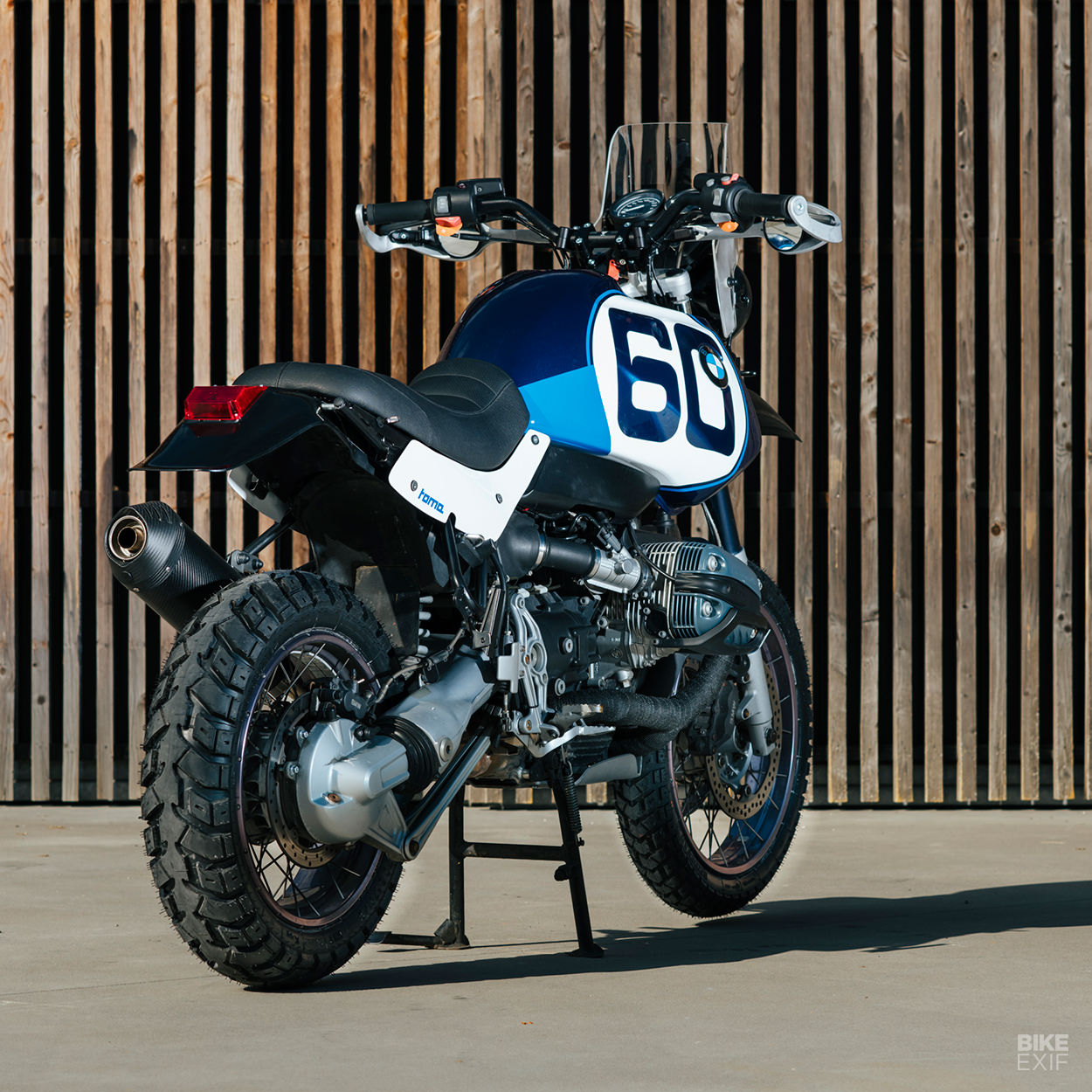 “Bernard wanted to transform his R1150GS, and his wishes were very clear,” says Thomas. “He needed a lighter and more ‘fluid’ motorcycle, for his road trips and for off-road use.

“He wanted us to lighten the bike, and adjust the general lines while keeping sufficient protective equipment for off-road riding. He also wanted the saddle to accommodate an occasional passenger, and we had to retain the original fuel tank—with its large capacity—for his long off-road trips.” 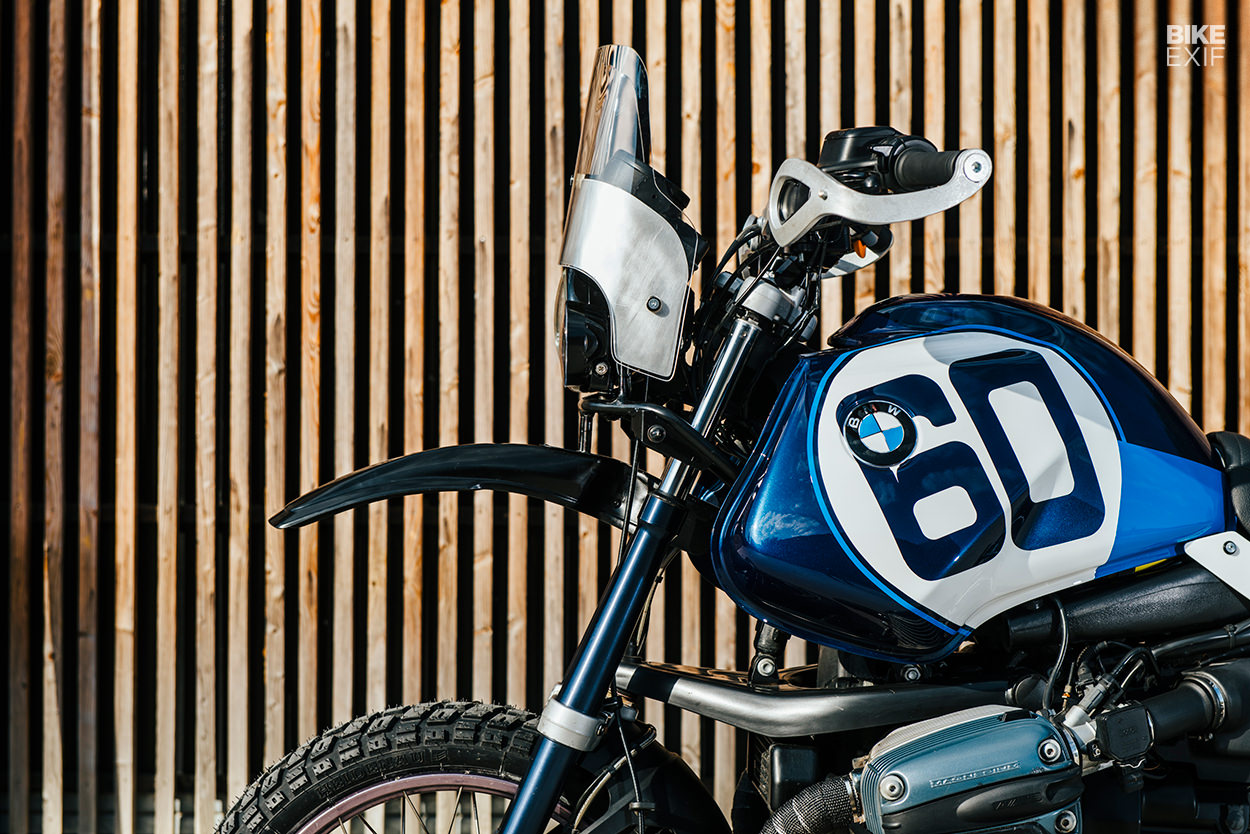 Bernard likes the aesthetics of modern Dakar motorcycles, and Thomas soon realized that he was going to be facing quite a few technical challenges. The GS bikes of the early 2000s are famously difficult to modify, and the Telelever front suspension is a particular obstacle.

“Every part of this BMW is designed to fit together in a unique way,” says Thomas. “To make a ‘balanced’ custom, you have to rework virtually everything from front to rear. Bernard knew that. And at the end of the briefing, he said with a big smile, ‘’I want to create a unique motorcycle, and if it was easy to make and reproduce, it would be a lot less fun!’” 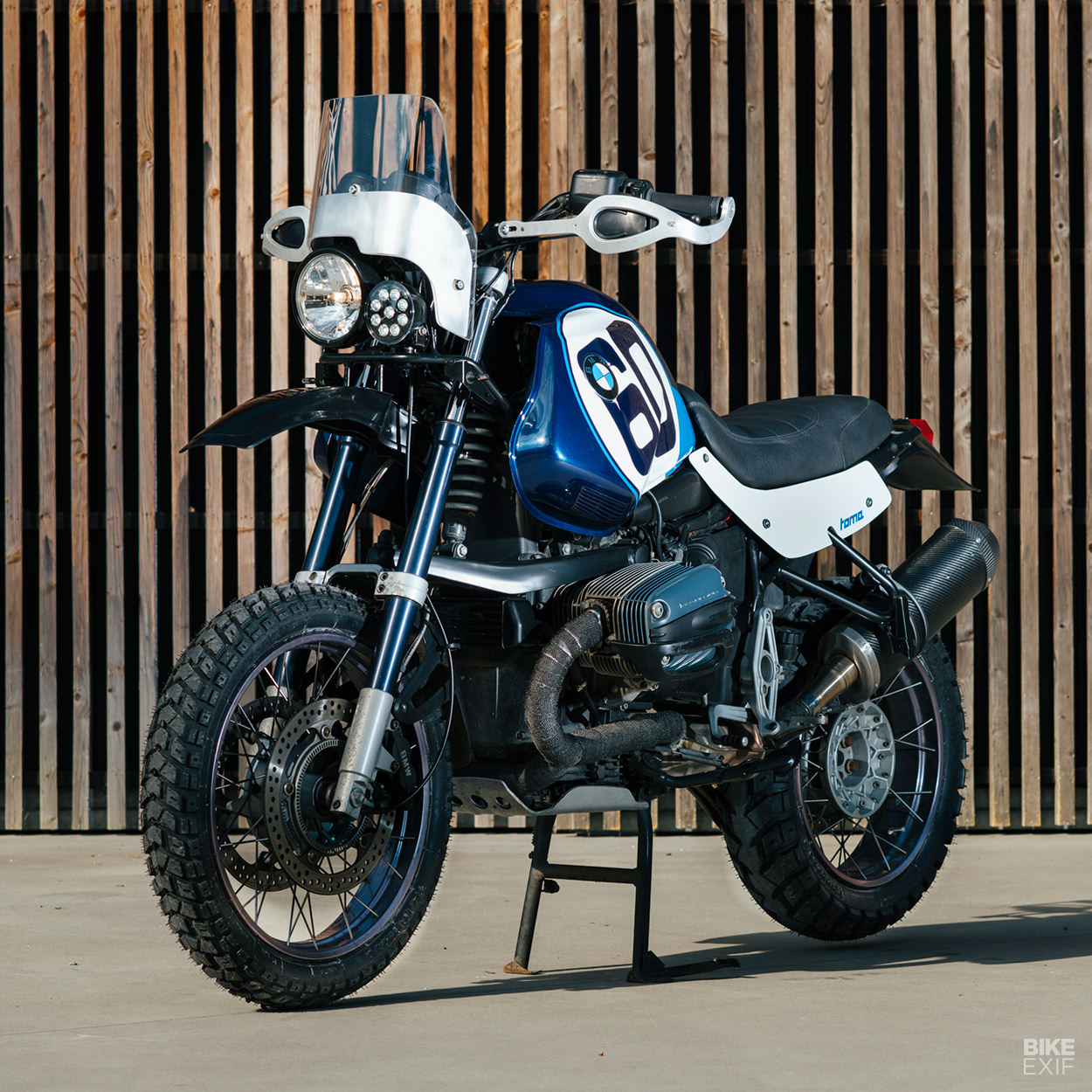 Thomas accepted the challenge and started what would turn out to be 370 hours of work on the bike. Bernard was involved the whole way, and his sharp eye proved invaluable when it came to tricky decisions about aesthetics.

The R1150GS that Bernard dropped off at the Brussels workshop was in good condition and this model is known for its reliability, So Thomas has left the 85 hp boxer motor and its airbox untouched—but he’s replaced the exhaust muffler. The new muffler is now mounted on a bracket attached to the frame. 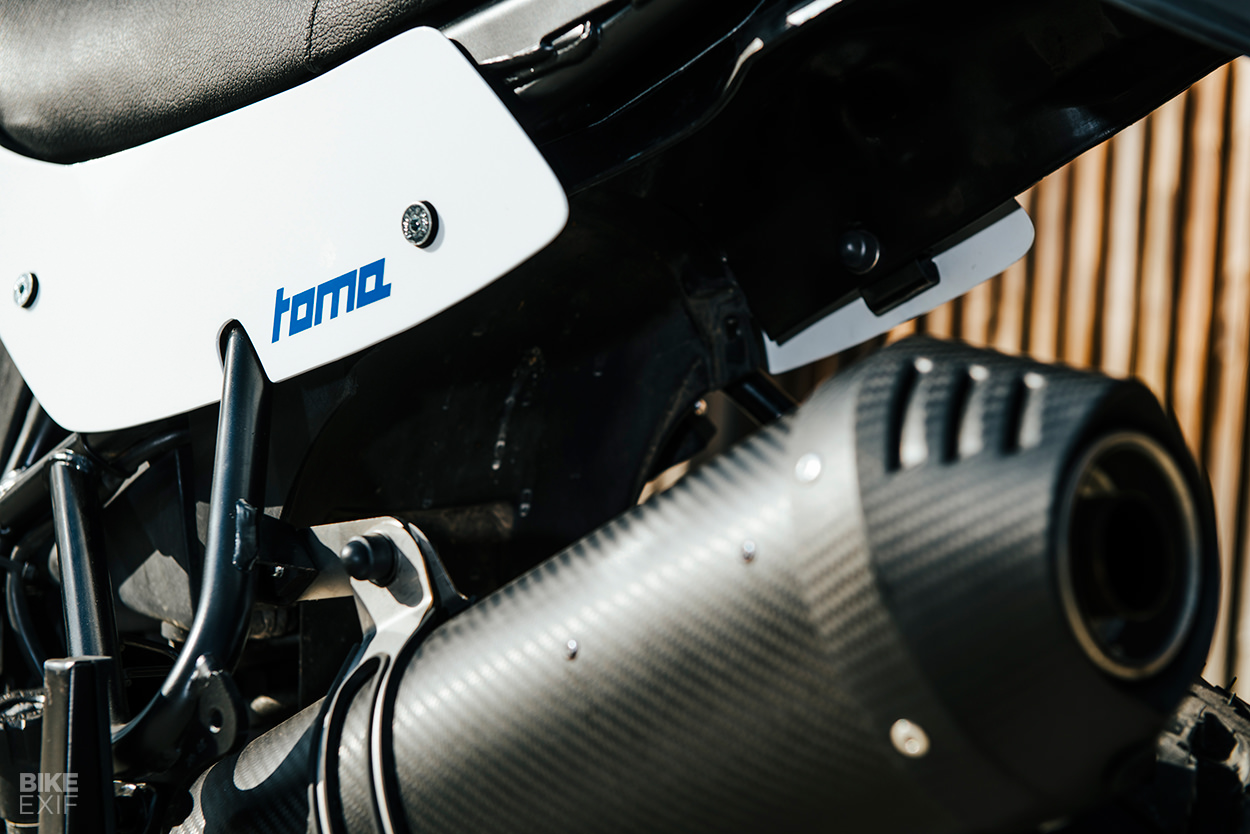 Most of the modified parts were custom made or adapted at the Toma workshop: the front rally fairing, the hand guards, the redesigned cockpit and the speedo holder.

Thomas also built new front and rear fenders, side covers, and a new rear subframe. “The rear of the factory R1150GS is quite crowded and overbuilt,” Thomas says, “so we reworked and shortened the end of the frame and created a new saddle. 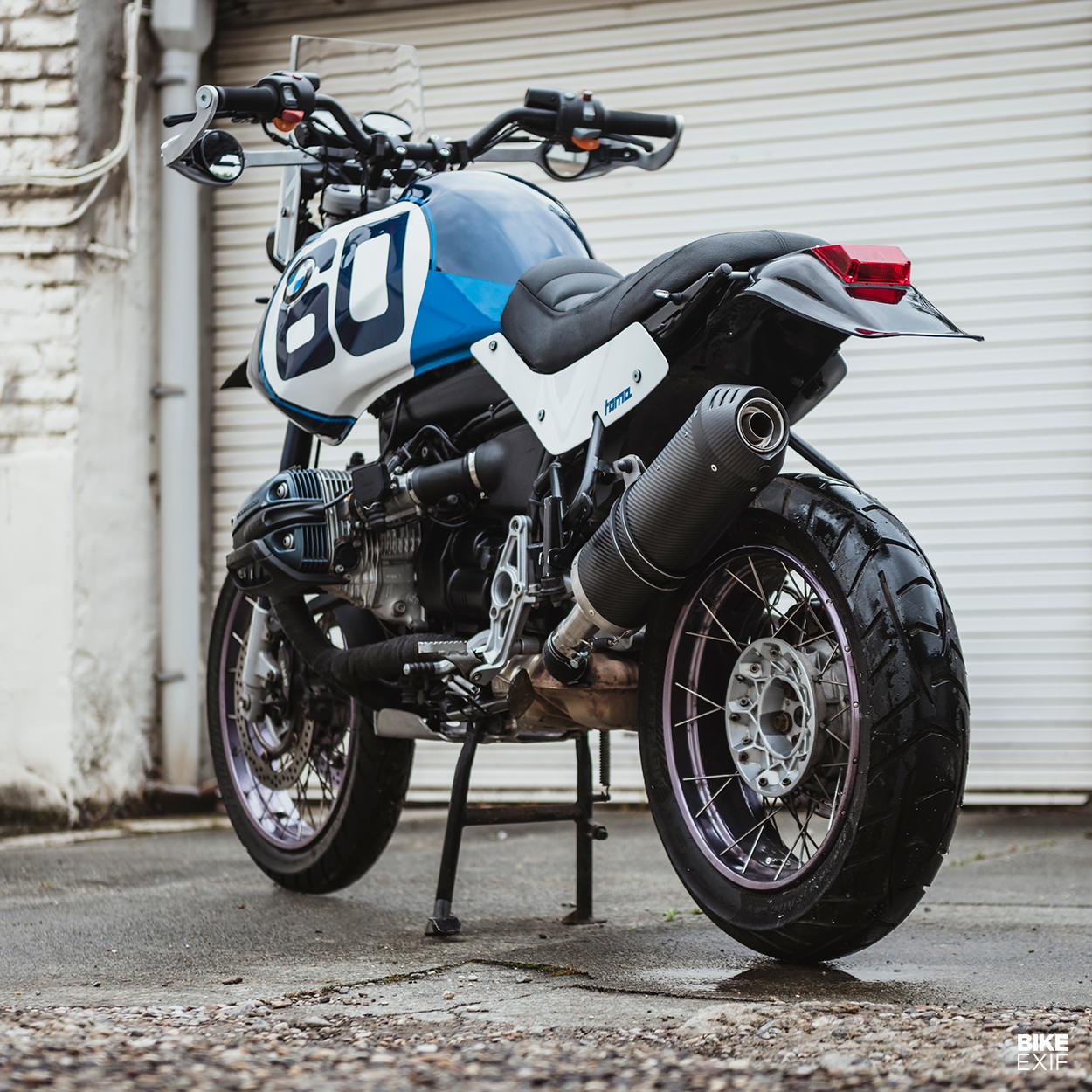 “The new configuration is minimalist, and tapers towards the rear with a new fender that is now fixed directly to the frame.”

At the front, most of the original cockpit ended up in the bin. Gone are the bulky fairing and twin headlight combo, which has been replaced by a large main headlight and a long-range LED light for good visibility in extreme conditions. 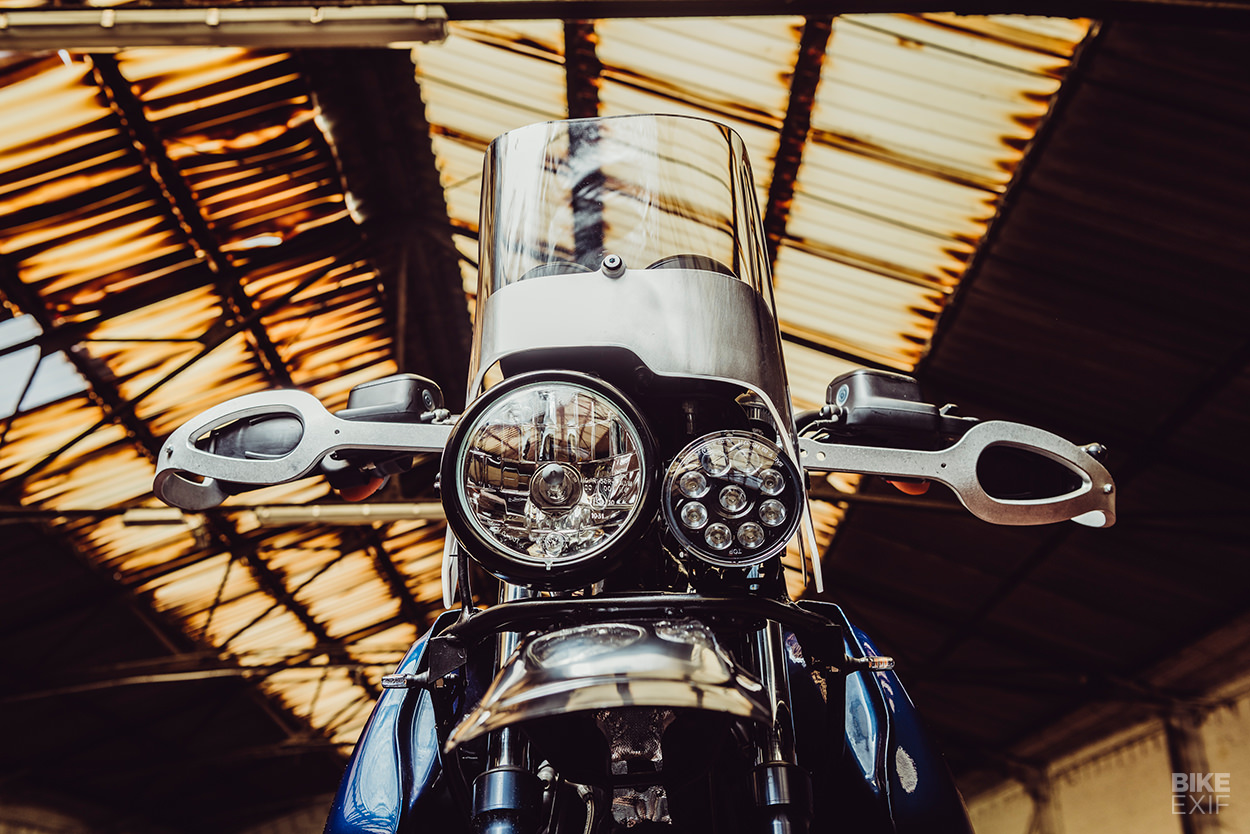 There’s a hand built rally fairing, the lower front fender has been trimmed, and the new upper fender is more in tune with classic enduro style than the original. The instrumentation of the GS has been retained though, and mounted on a smaller, homemade bracket.

Thomas has replaced the handlebars with a black oversize model, and added pivoting risers to suit Bernard’s type of use—switching between city and off-road—but the original BMW switches are still in play. 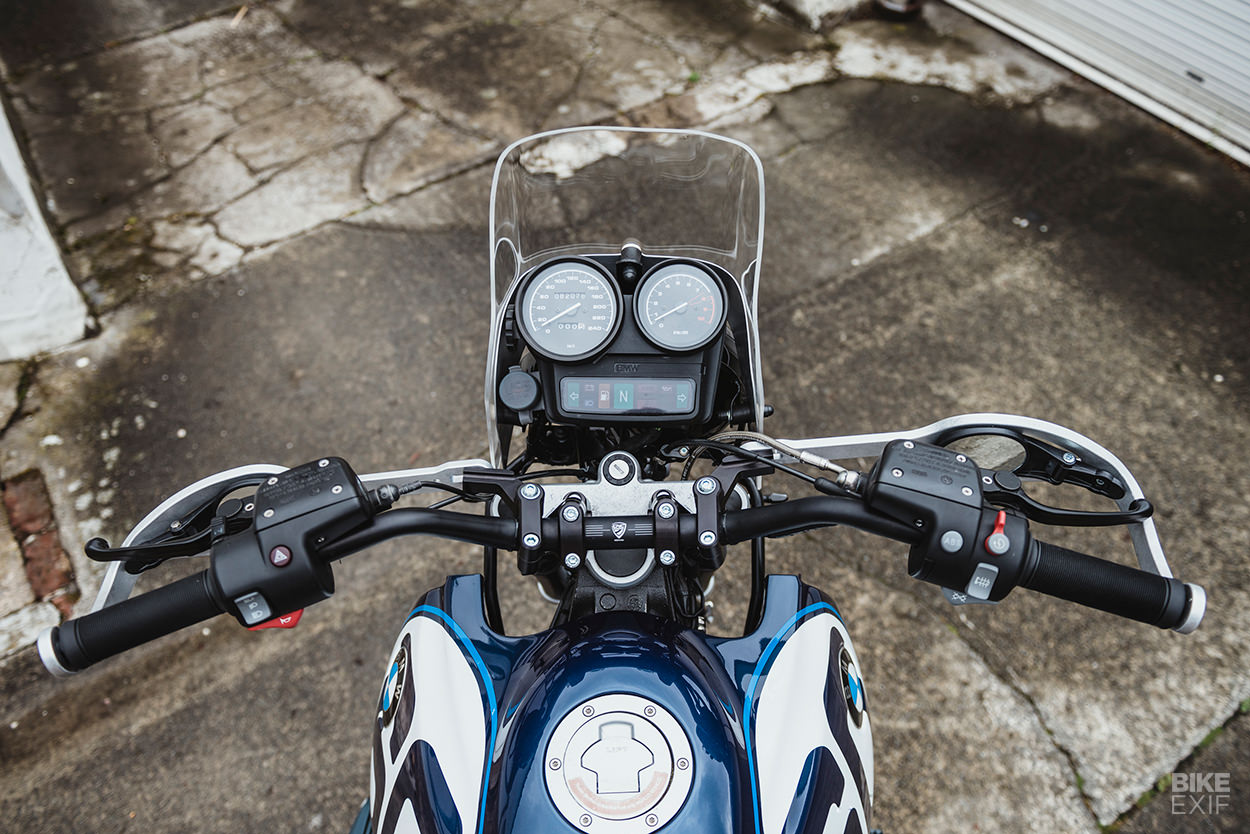 “We played with a mix of modern and retro touches, so that the BMW would look timeless,” says Thomas. “The front fairing, hand guards and minimalist turn signals give the bike a modern enduro style, but the bodywork, side covers and fenders are more reminiscent of the enduros of the past.”

The paint was done in two stages. Toma Customs painted the frame and supports in black, but entrusted the trickier stuff to Carrosserie Janssens of Braine-l’Alleud, a body shop known for its exceptional work on vintage cars. 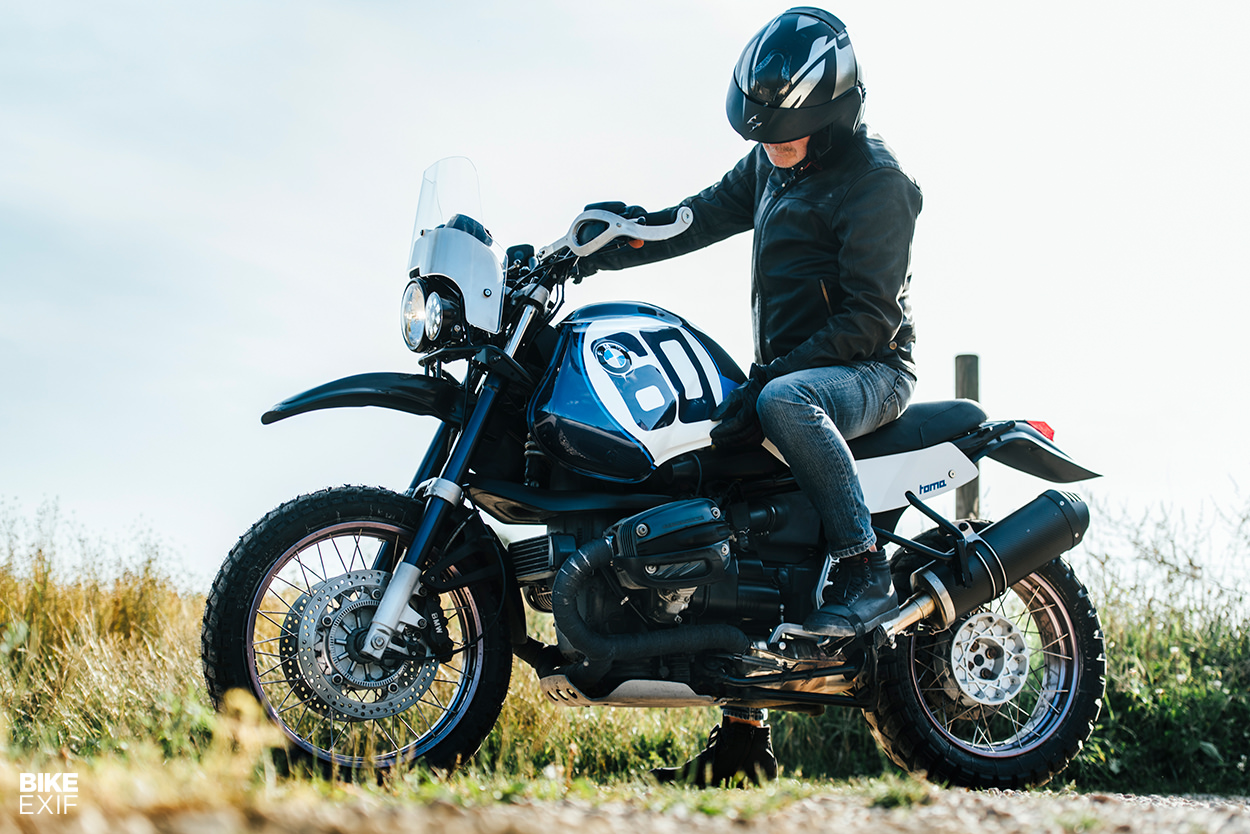 Despite delays related to COVID-19, the BMW was ready just in time for Bernard’s next off-road trip in France. Thomas delivered the big GS with two sets of tires, for road and off-road use.

After a photo shoot at the beautiful ‘Ferme de Perk,’ an estate just south of Brussels owned by rally driver Gérard Marcy, the BMW was ready for its next adventure with Bernard [below right]. Bon voyage, monsieur! 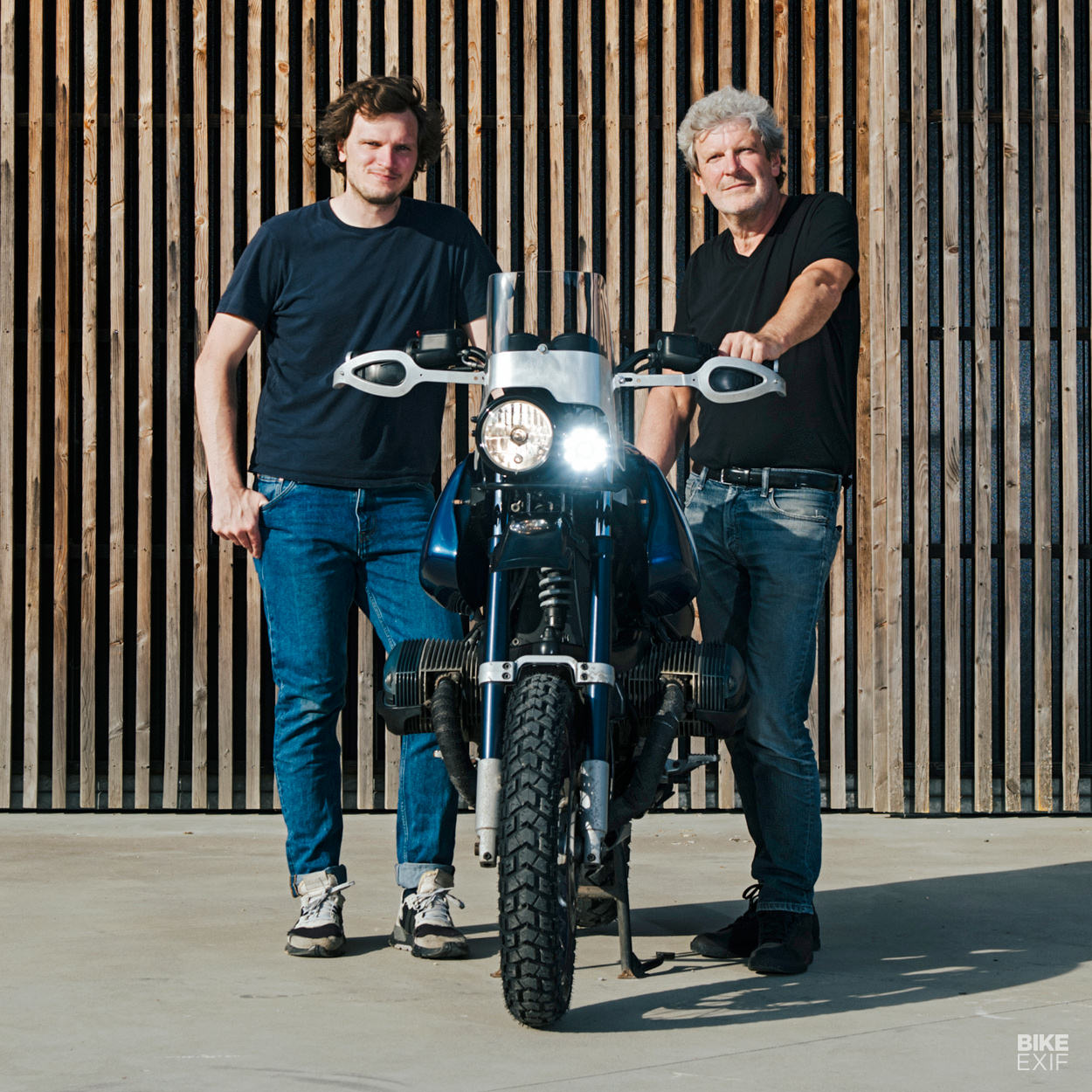