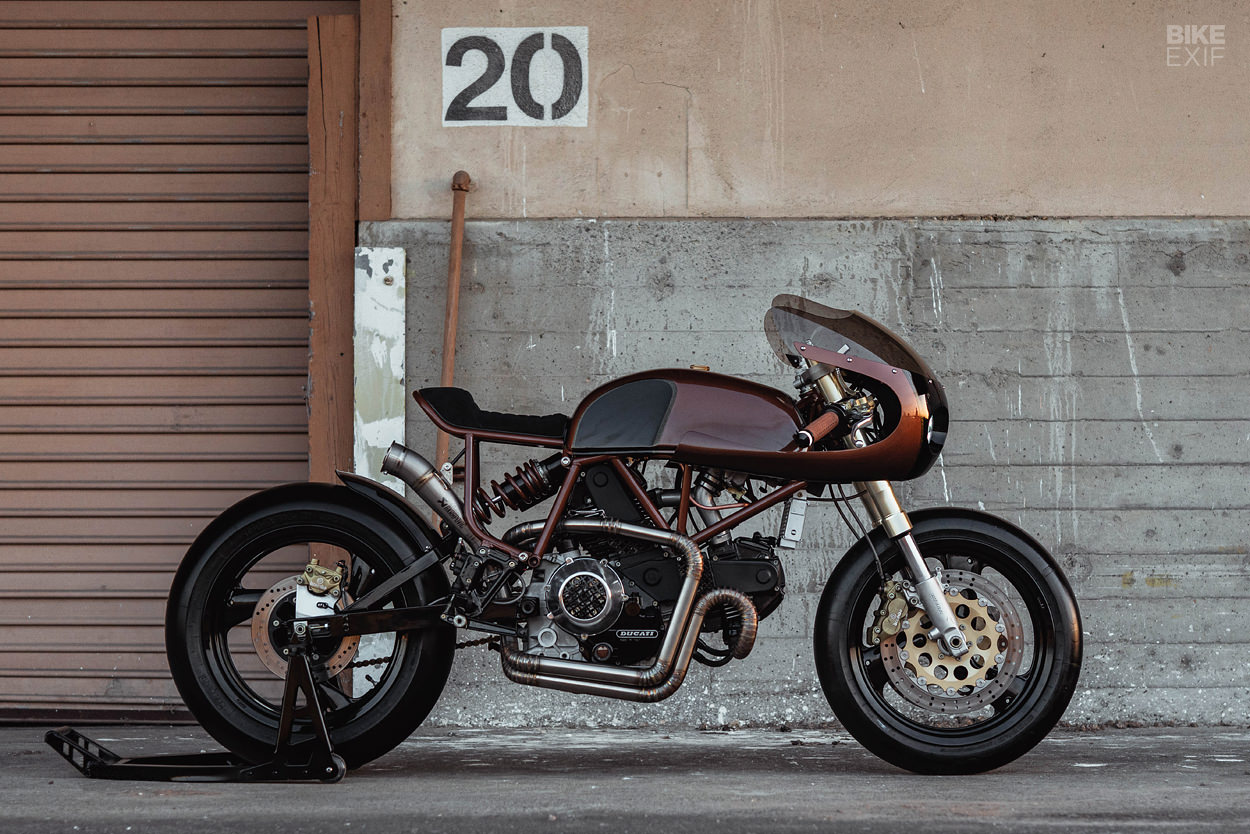 EVEN THOUGH THE Ducati 900 SS is some three decades old, we still see a lot of customs-based around the 90° V-twin Desmo engine. A little online digging reveals the reason: over 25,000 examples of this model rolled out of the factory in Borgo Panigale.

That’s an impressive number and around half of Ducati’s entire factory output last year. 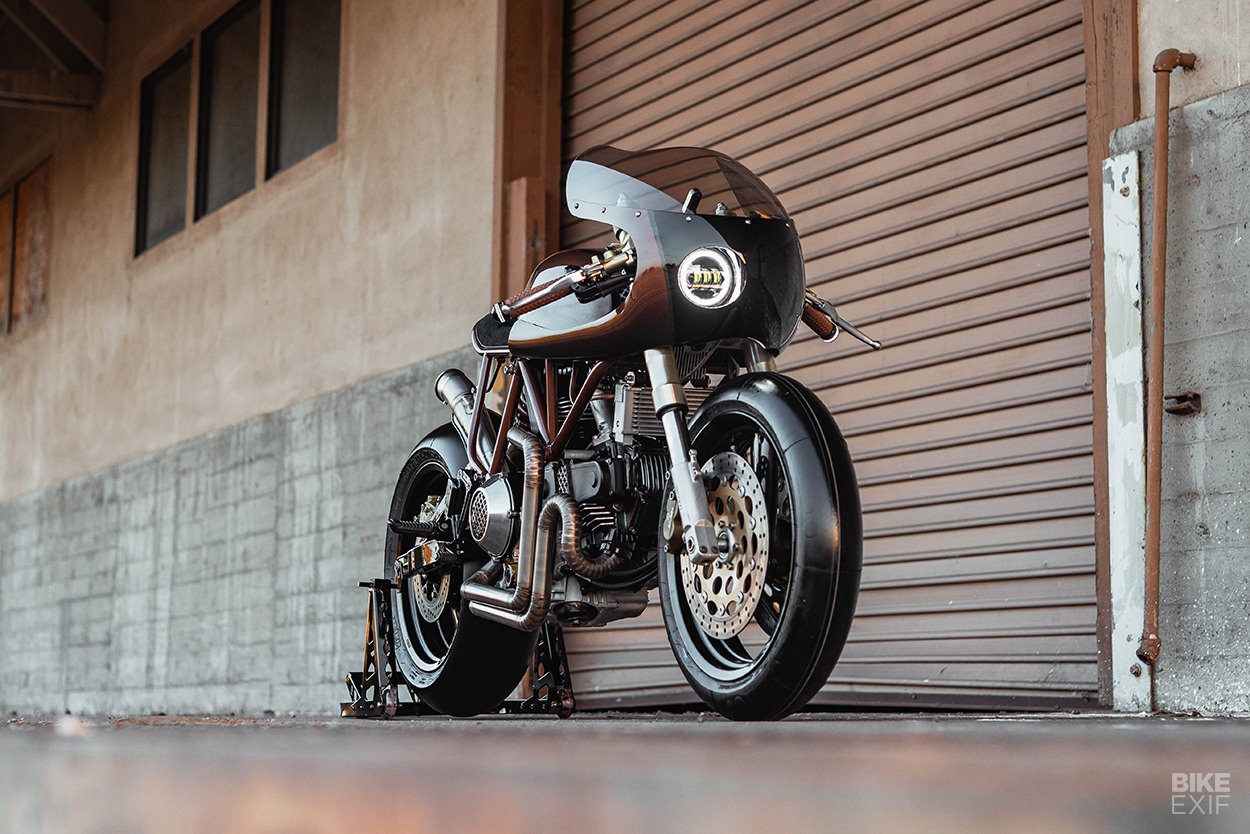 Fortunately, the quality is high with 900 SS builds, and this new machine from Johnny Nguyen follows the trend. Johnny runs Upcycled Motor Garage in Anaheim, California, and has wowed us several times already over the past year with his knack for crisp styling (and penchant for white wheels).

This time he’s put 1992 900 SS upon his bench, after finding one in decent running condition on Craigslist. And the result is stunning. 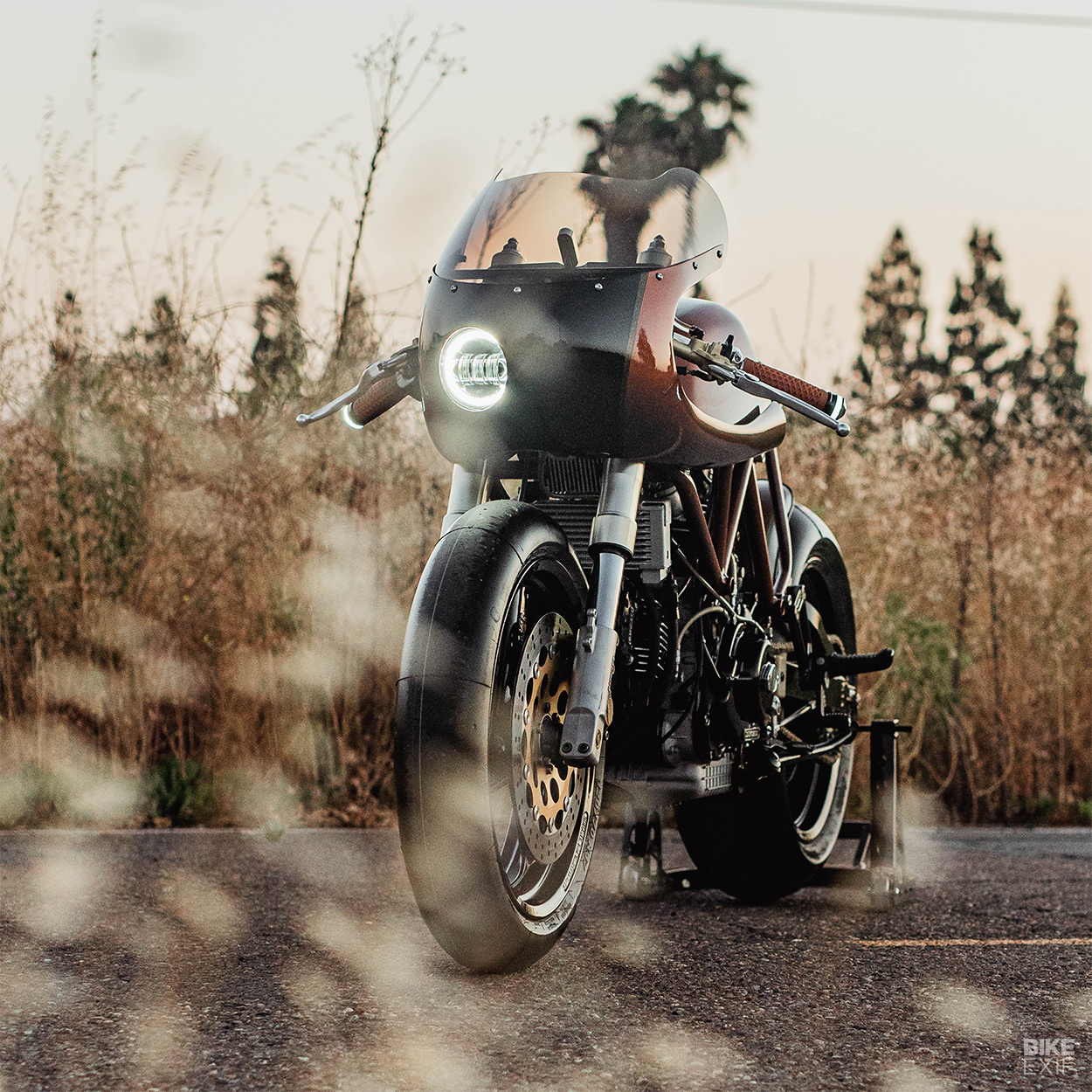 The Ducati was not a commission: Johnny built the bike to suit his own tastes, and it matches the style of his BMX, which he rides daily.

The stock 900 SS is quite a heavyset looking machine, with a full fiberglass fairing and a chunky seat and tail unit. So Johnny has added visual lightness by removing the stock ’glass and building a new rear frame with just enough space for a solo seat, upholstered in black suede. 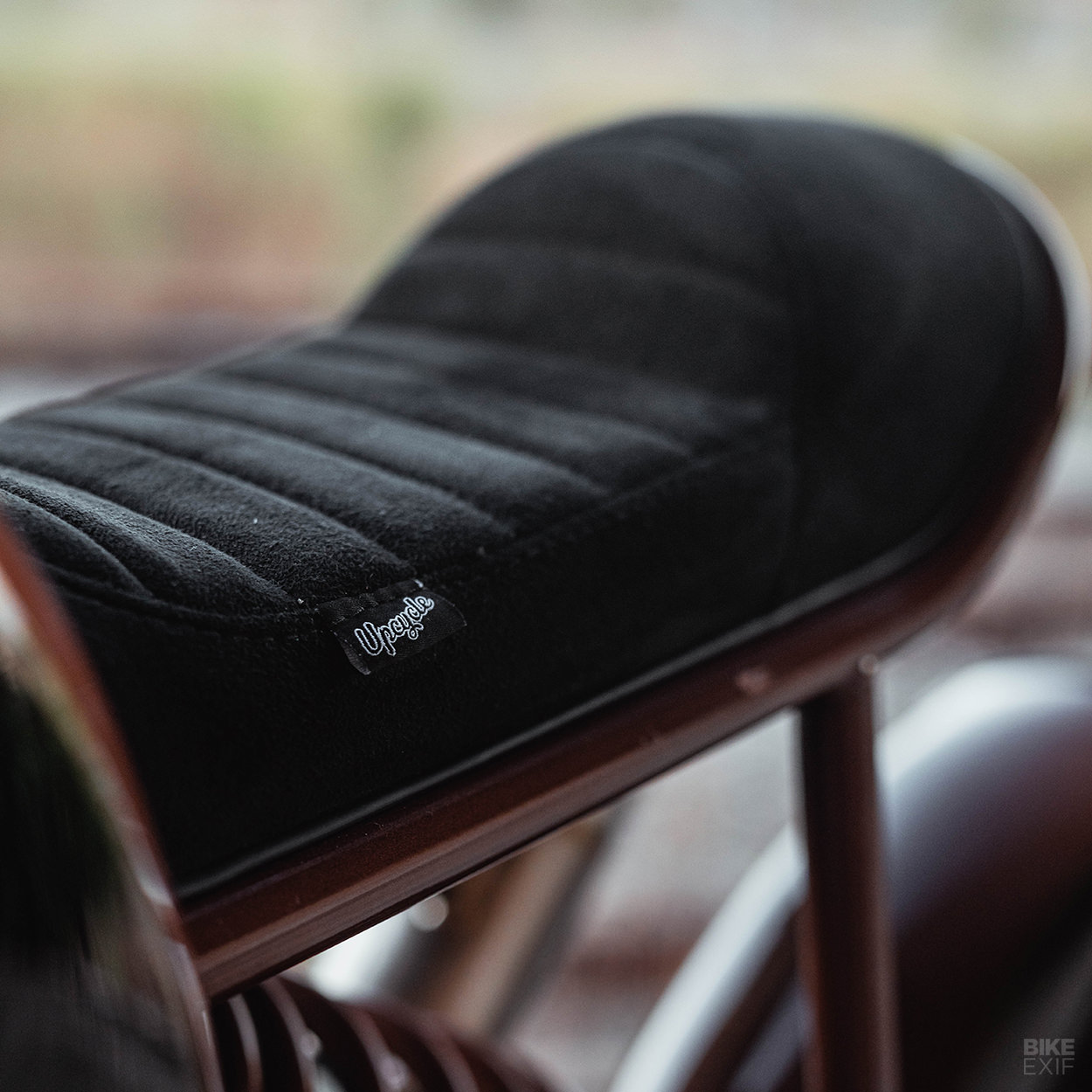 The compact bikini fairing is a Ducati competition unit from Airtech, which Johnny very neatly modified to accept a headlight.

Right behind is a Motogadget Motocope Mini speedo, plus Woodcraft clip-on bars furnished with Motion switchgear and Vans x Cult ‘waffle sole’ grips, which are actually made by ODI. The levers are Brembos, taken from an early 2000s Ducati 998, because the stock items didn’t quite fit. 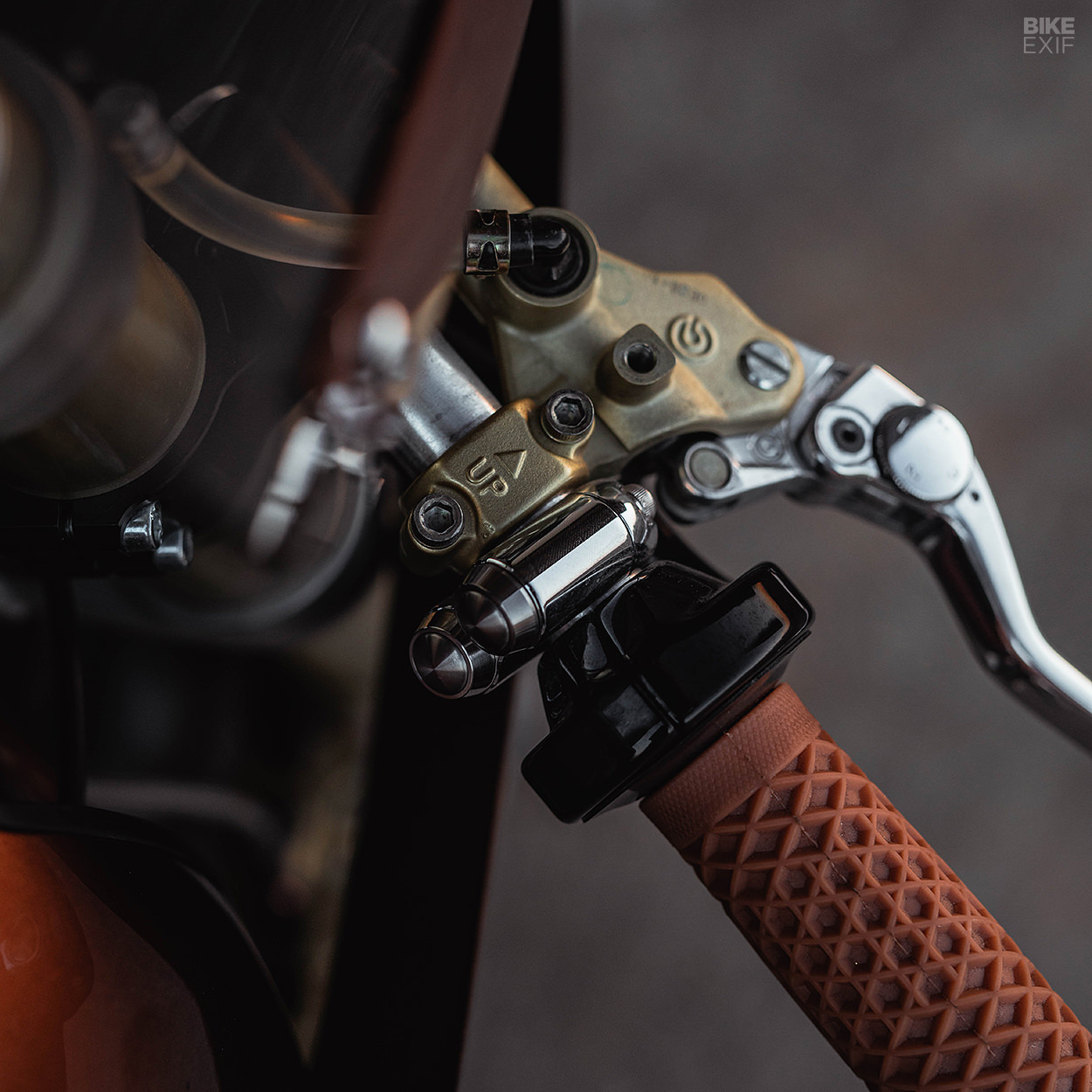 Johnny has fabricated a new aluminum fuel cell, which is hidden under a salvaged Honda CX500 tank. “I just cut the bottom off the CX500 tank and it fitted almost perfectly around the frame section upfront,” says Johnny.

“I had to make mounting points for the original frame, and at the other end for the new subframe. It was easier to make a separate fuel cell that mounted to the frame, so I didn’t have to worry about stress points.” The bike can be ridden without the CX500 outer shell if desired. 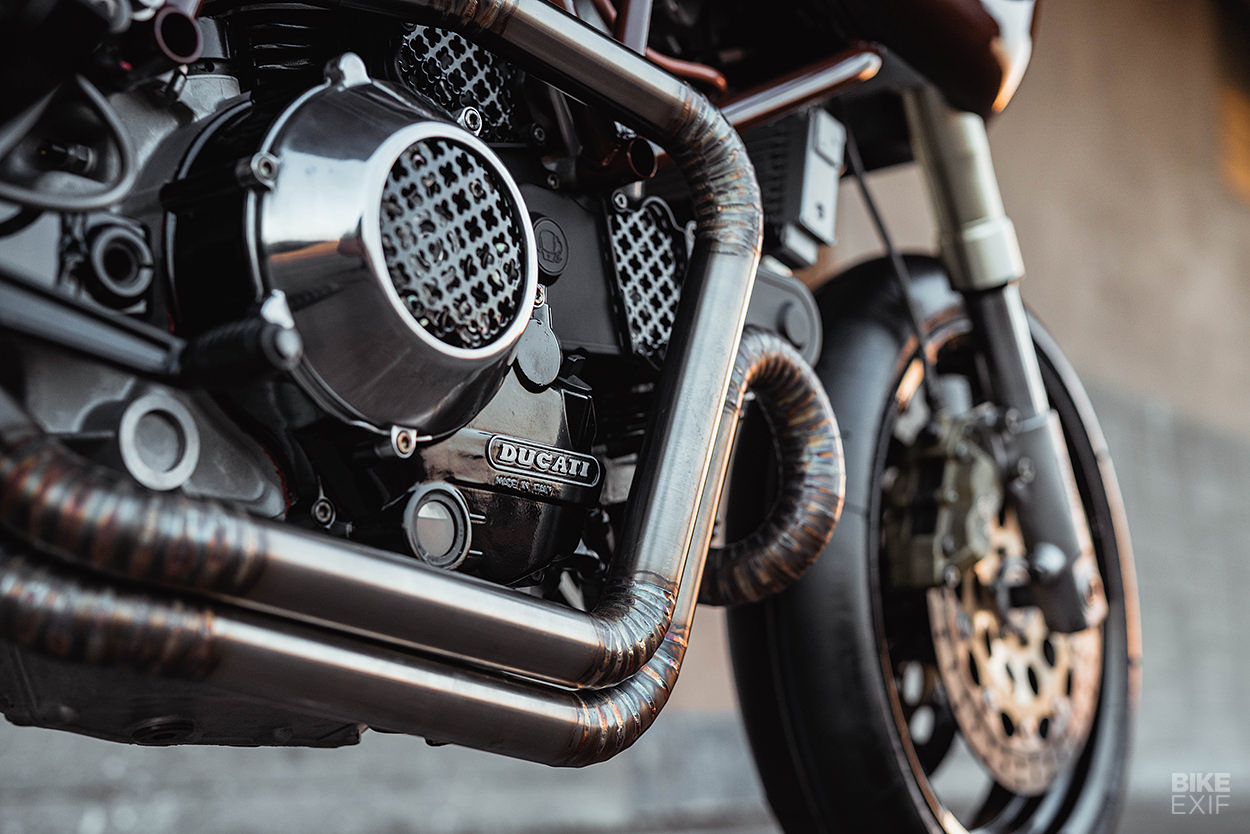 The iconic 904 cc engine has been refinished in black, and now breathes in via Ramair pod filters rather than the stock airbox. Gases exit via a custom exhaust system in stainless steel, with pie-cut headers terminating in a titanium Akrapovič muffler.

Johnny has upgraded the wiring with a new charging system from Rick’s Motorsport Electrics and installed a Motogadget m.unit blue box to control everything. The juice is provided by a compact Antigravity battery and there are blinkers integrated into the bar-ends and taillight. 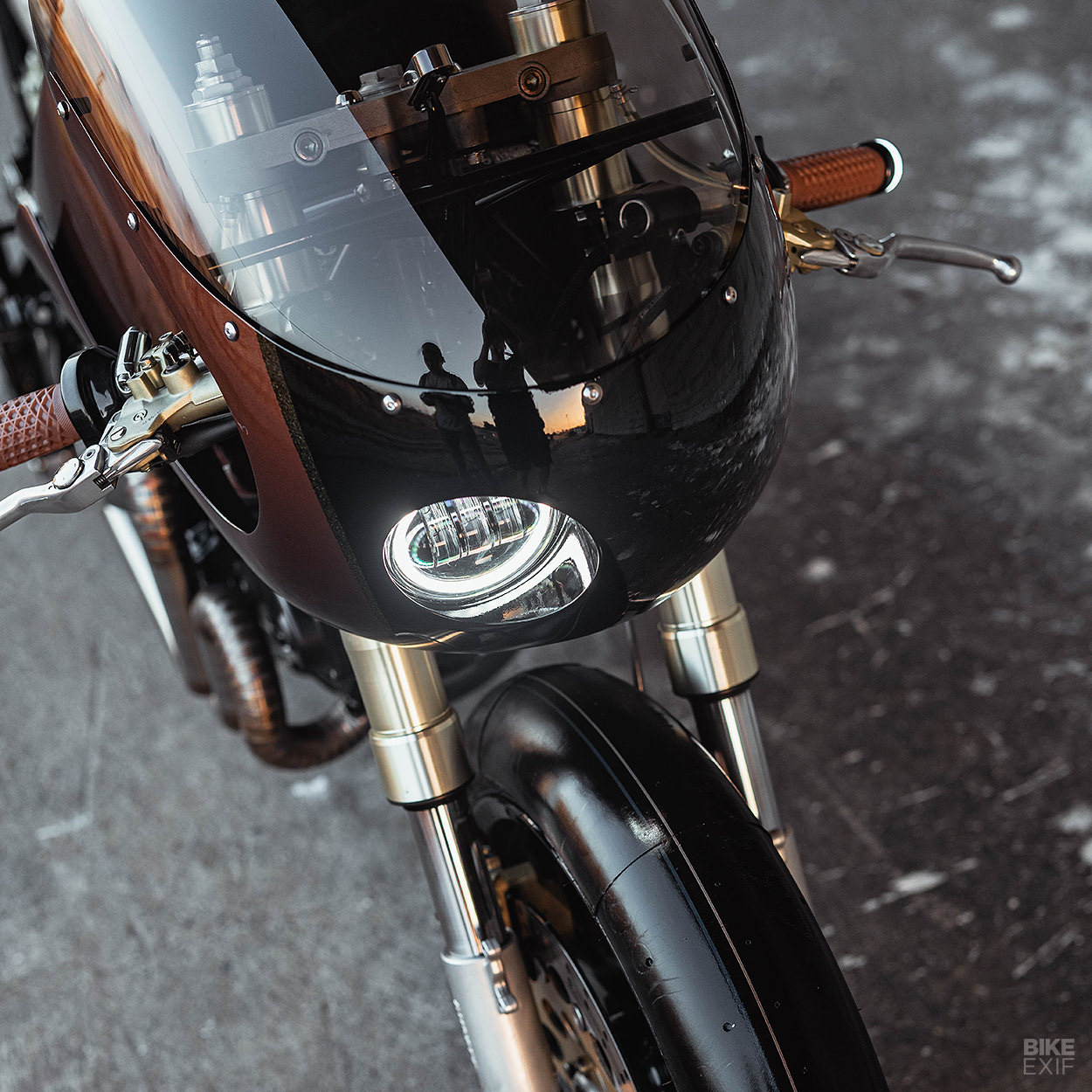 Johnny’s finished the Ducati off with powder coat on the frame, and matching copper-toned paint with a dark fade and gold flaked pinstripes. It’s not a common color choice but suits the minimal nature of the 900 SS perfectly.

There’s just one chance left to make: swap out the Pirelli Diablo Superbike SC1 track day slicks for more street-friendly tires. But we have a niggling feeling that someone will snap up the Duc before then, and Johnny will be back to riding his matching BMX around LA … 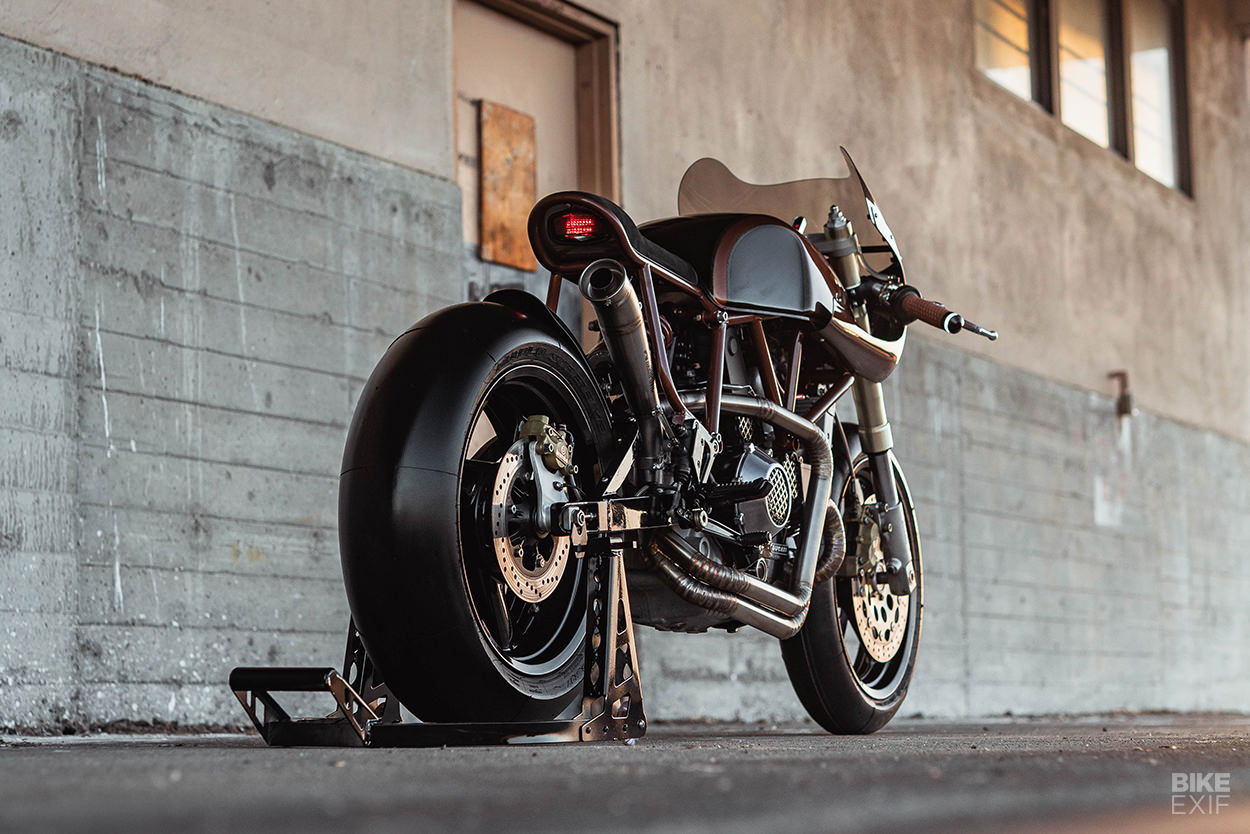