Skip to content
🎃HALLOWEEN SALE🎃 50% OFF TODAY ONLY Free Shipping Available
Risk-free returns 30-day Return Policy
100% secure checkout
COMMUNAL MOTORCYCLE WORKSHOPS have popped up everywhere over the last few years. They’re well-equipped spaces where people pay to use the tools and facilities to wrench on their own bikes, often with help from others. Socializing and skill-sharing are commonplace, and customers often become part of the furniture after a while.
Swedish custom house 6/5/4 Motors opened their own communal workshop in Stockholm six years ago, and now host over 40 ‘tenants.’ The vibe is highly creative, with people working on everything from motorcycles to furniture and even musical instruments. 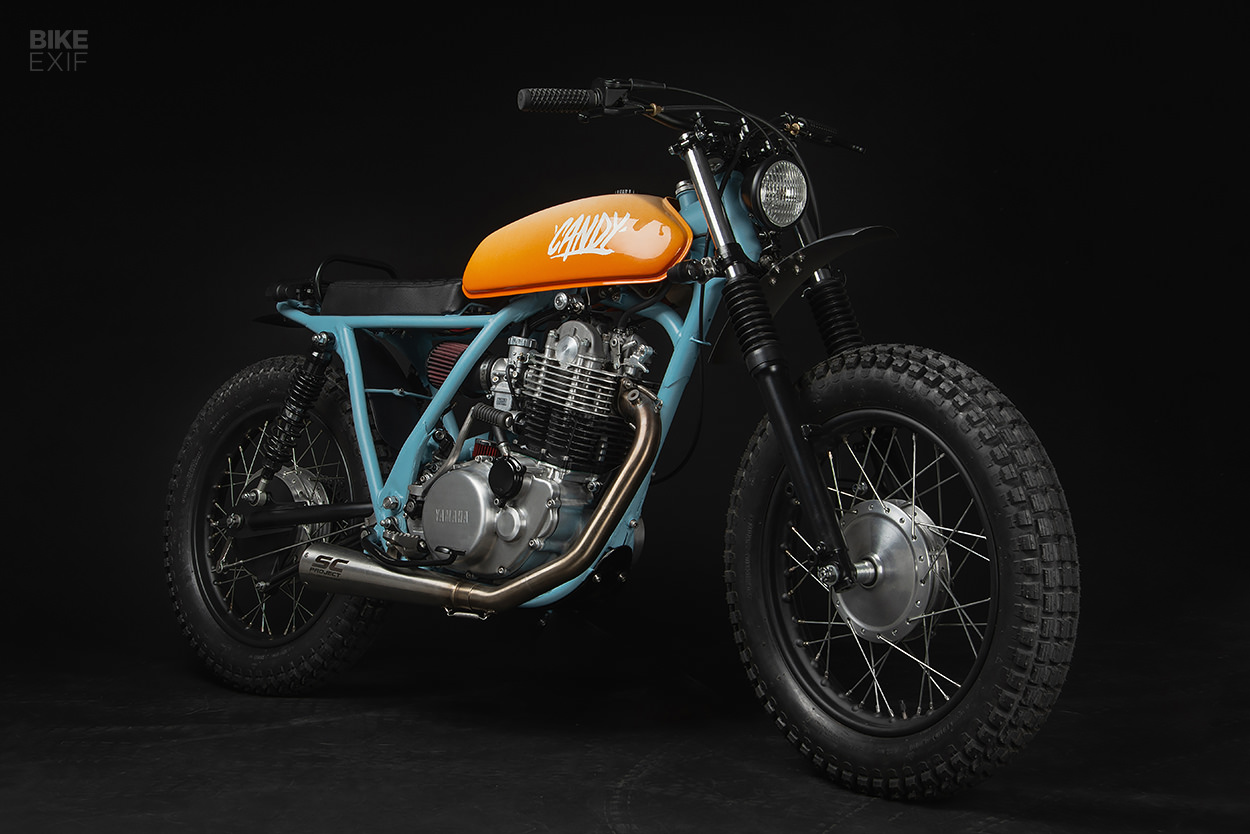 Rasmus Steyner Randén started renting space there four years ago, and over the years has morphed into the workshop’s go-to ‘floor manager.’ He’s not only handy with a wrench, but also has a background as a motocrosser and graffiti artist, and recently completed his design degree.
This candy-coated 1980 Yamaha SR500 is his own project, with the 6/5/4 Motors staffers backing him up where needed. 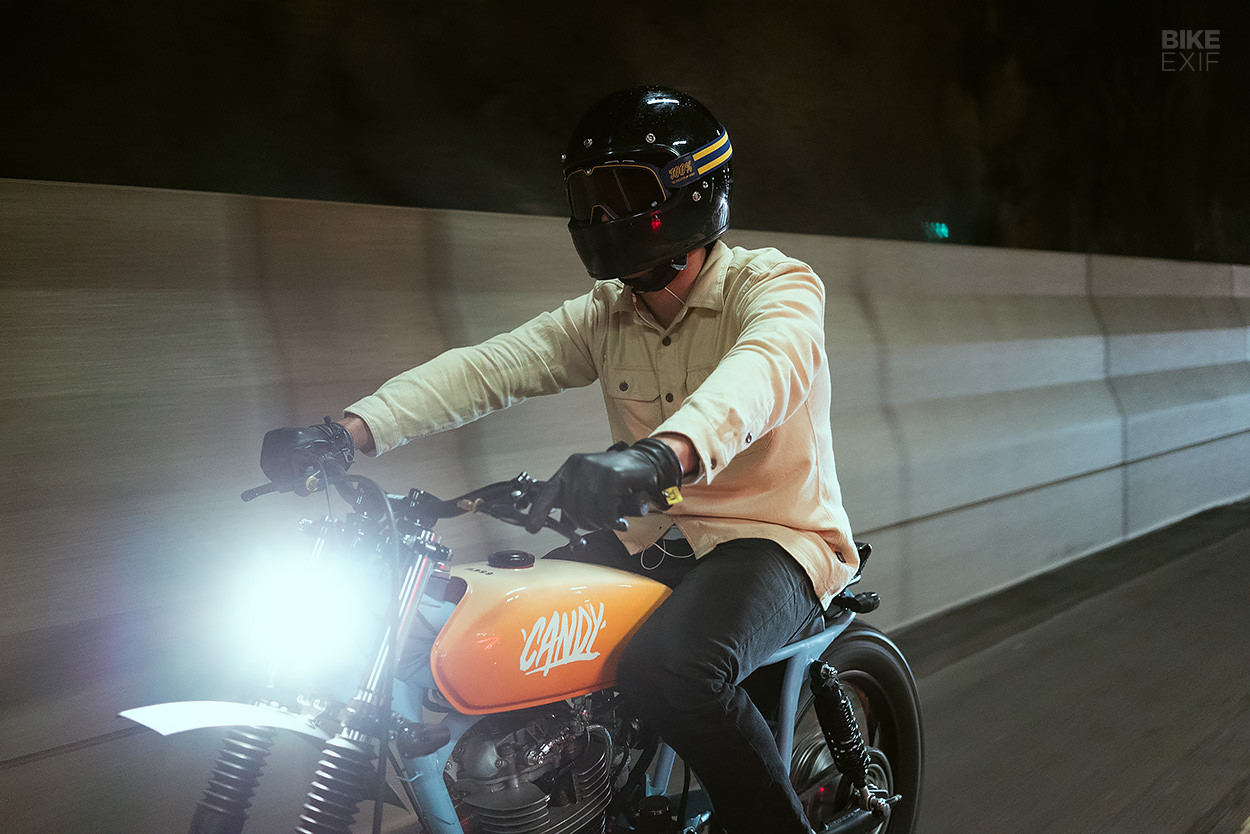 Rasmus’ concept was simple: he was stuck in his car in traffic, and decided that a quick and nimble city bike would be a far better prospect. The SR’s not exactly a big bike to start out, but the focus here was to trim it down even further—and give it a hit of color to match Rasmus’ personality.
On the list was new bodywork, a shortened subframe, and running gear that would improve the old Yamaha’s ride quality. 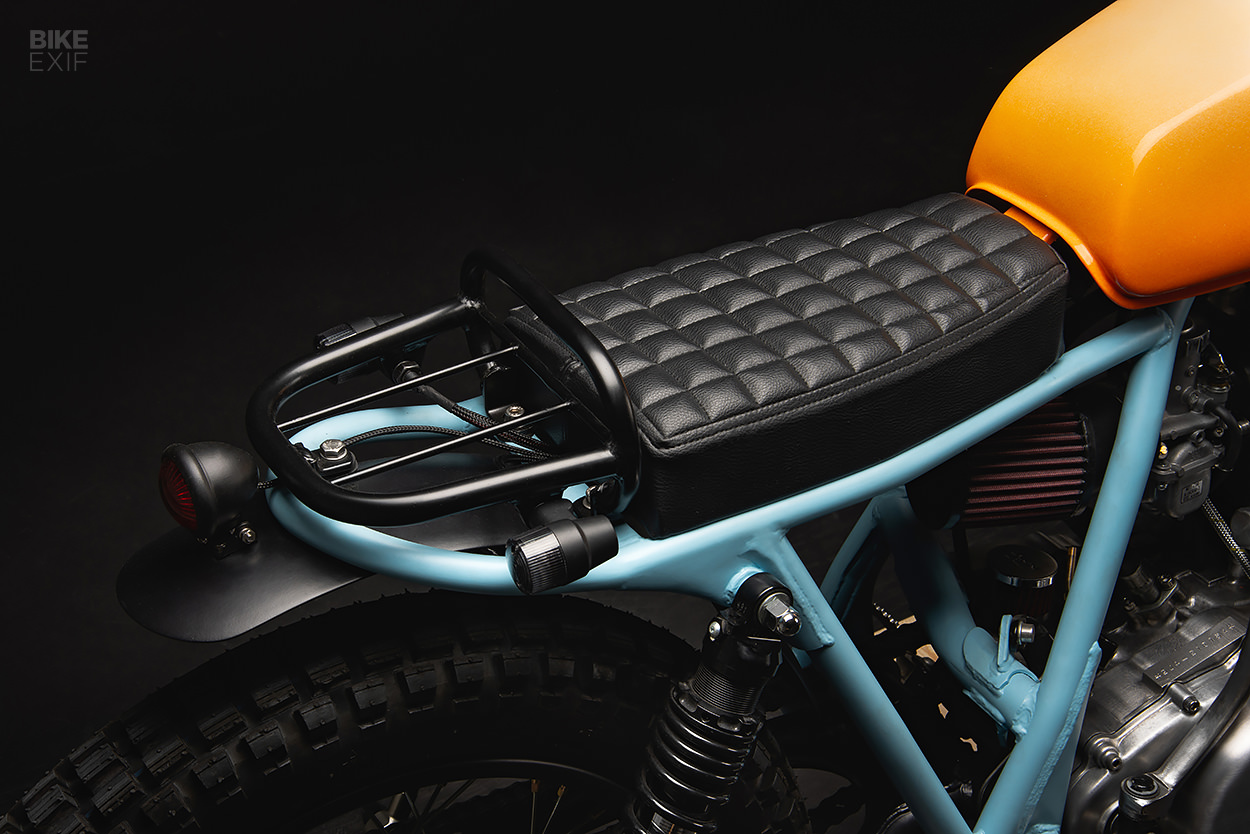 The SR500 now wears a much slimmer fuel tank, lifted from a 1979 Yamaha FS1. Just behind that is a skinny seat and a hand-made luggage rack, and the subframe’s been trimmed and looped to match. Aluminum fenders at both ends finish things off.
The SR might look cheeky on the outside, but it’s sorted under the hood, too. The motor was rebuilt with a bored out and Nikasil-treated cylinder, a new Wiseco piston and a Kedo oil line for better flow. There’s also a Mikuni VM36 carb with a K&N filter, and a very slick exhaust system from the Italian specialists, SC Project. 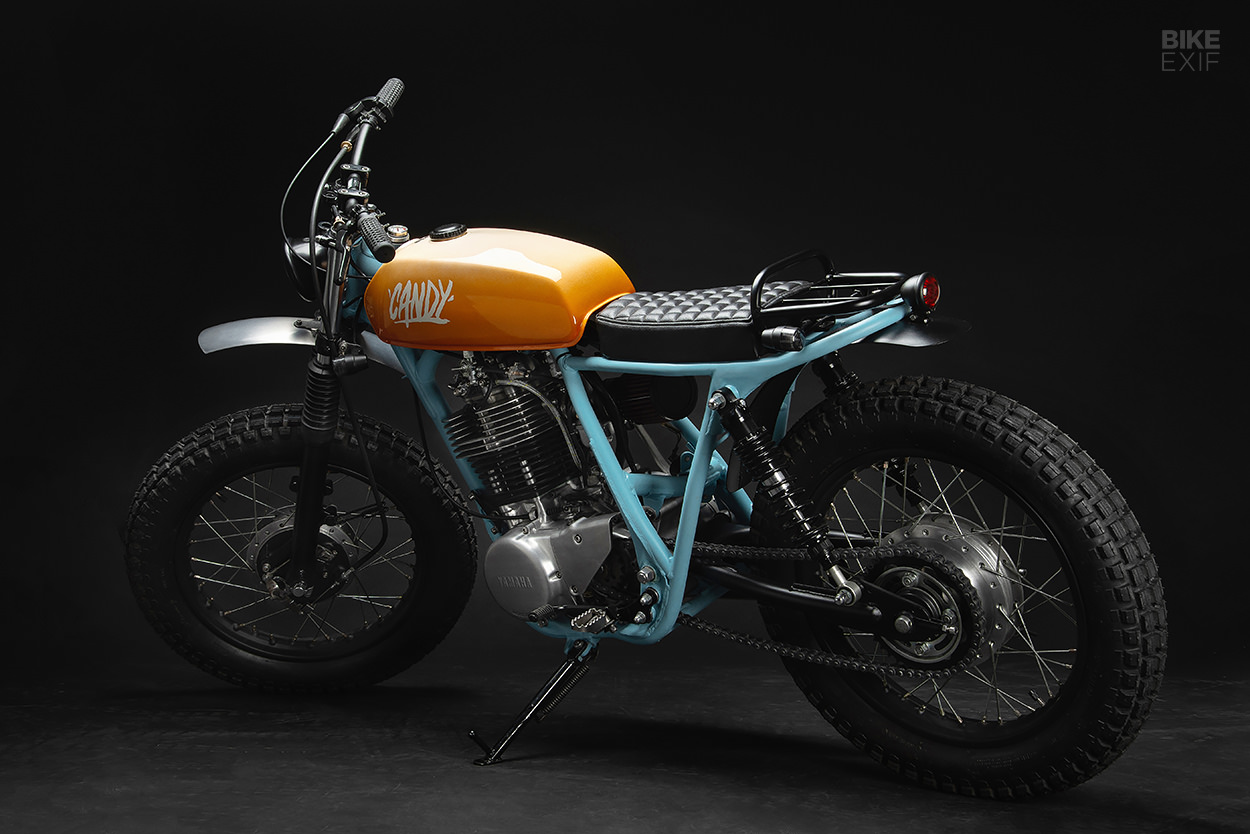 Moving to the suspension, the team installed progressive fork springs from Wirth, and a new set of rear shocks from YSS. The wheels are a combo of 18” Excel Takasago rims and Honda CL450 drum brake hubs (chosen for aesthetic reasons).
Higher up you’ll find ProTaper handlebars, shod with Vans ‘waffle’ grips and the most basic of switchgear. Rasmus also added a new decompression lever and foot pegs, Bates-style head- and taillights, and a set of classic turn signals. 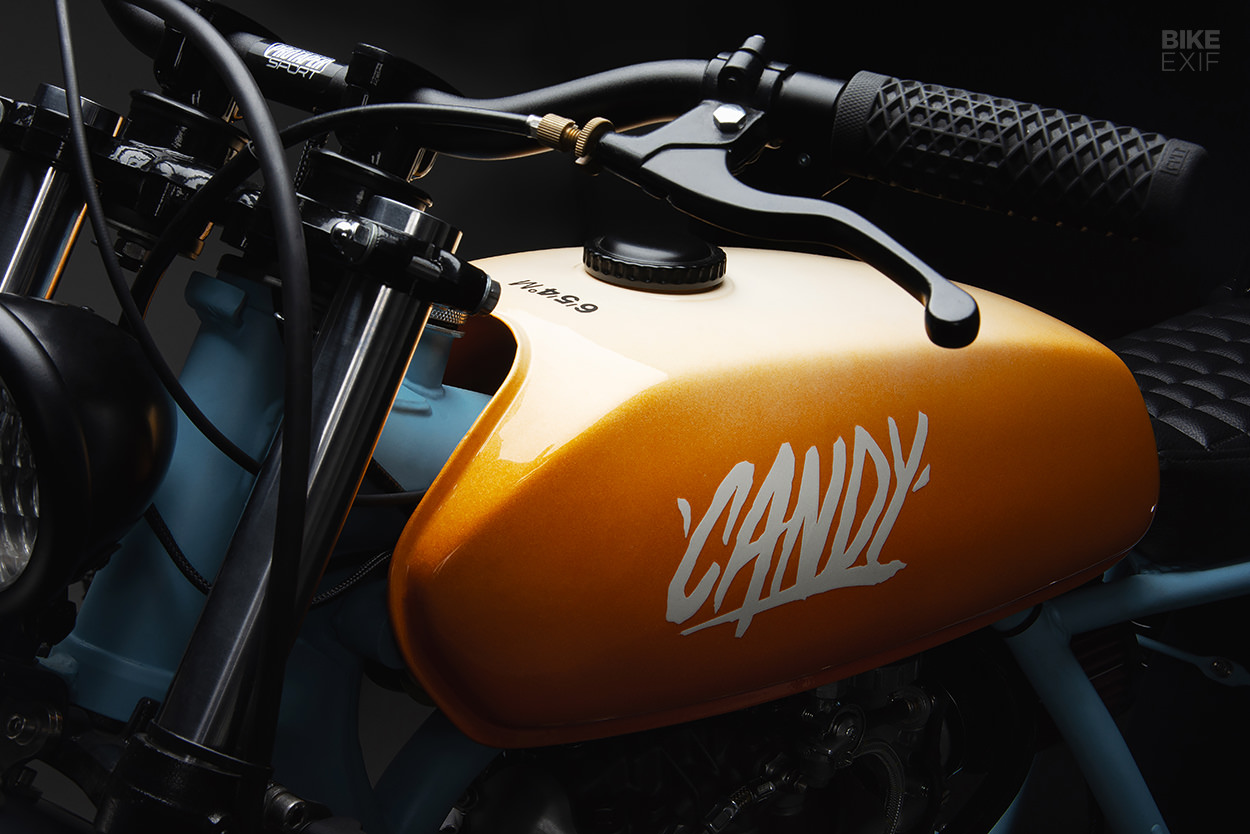 Like everything we’ve seen from the 6/5/4 workshop, the SR is incredibly neatly packaged. Rasmus handled the eye-popping tank paint himself, then sent the frame off for a matte teal powder coat. The motor was retouched with a mix of high heat black and hand-brushed finishes.
What we haven’t told you, is that Rasmus’ project had one major delay. Just as he’d finalized his sketches and sourced a suitable donor, he put the project on hold to focus on his design thesis. 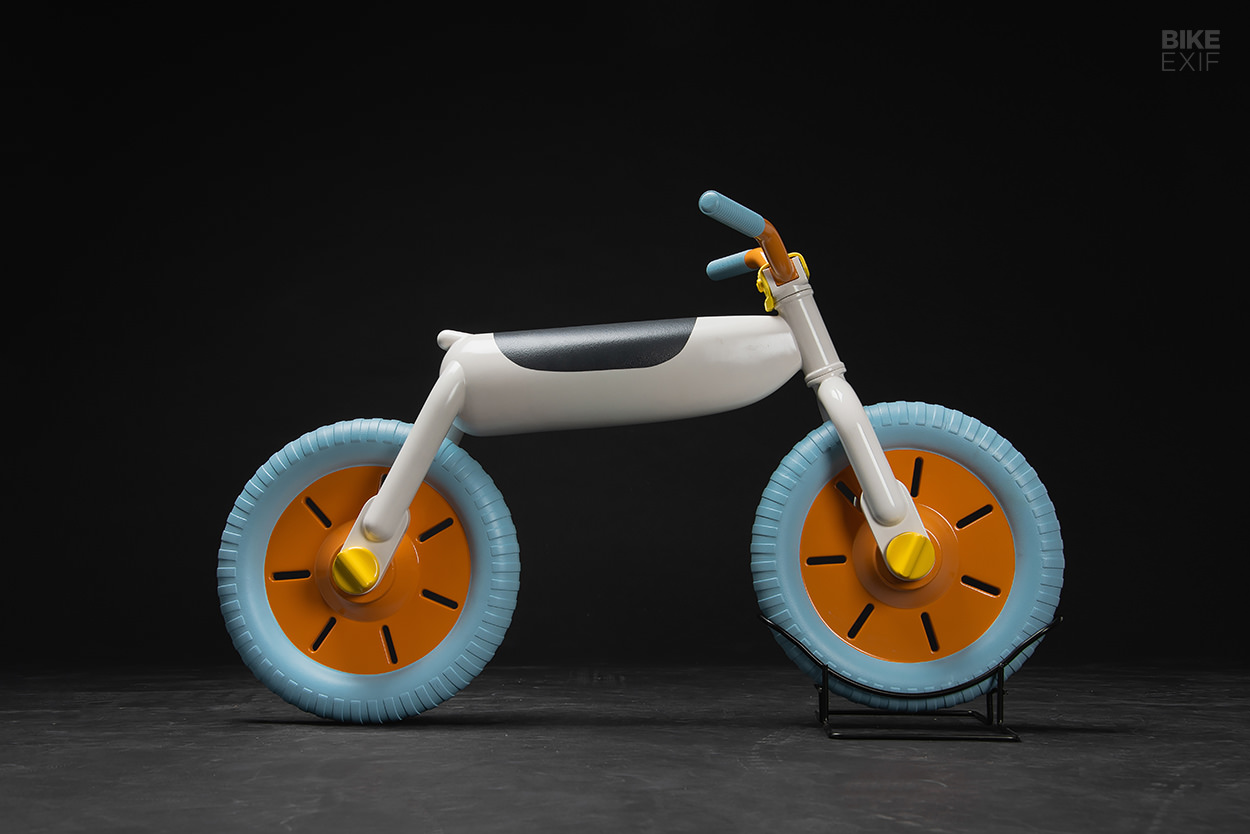 That’s where this adorable kid’s balance bike came from. Rasmus has dubbed it ‘Vingla’ (that’s Swedish for ‘wobble’), and took inspiration for the design from his original SR concept drawings.
He designed the whole bike in SolidWorks 3D modeling software, and the prototype you see here is almost entirely 3D printed. The only exceptions are the yellow silicone bits, which were molded using 3D printed molds. 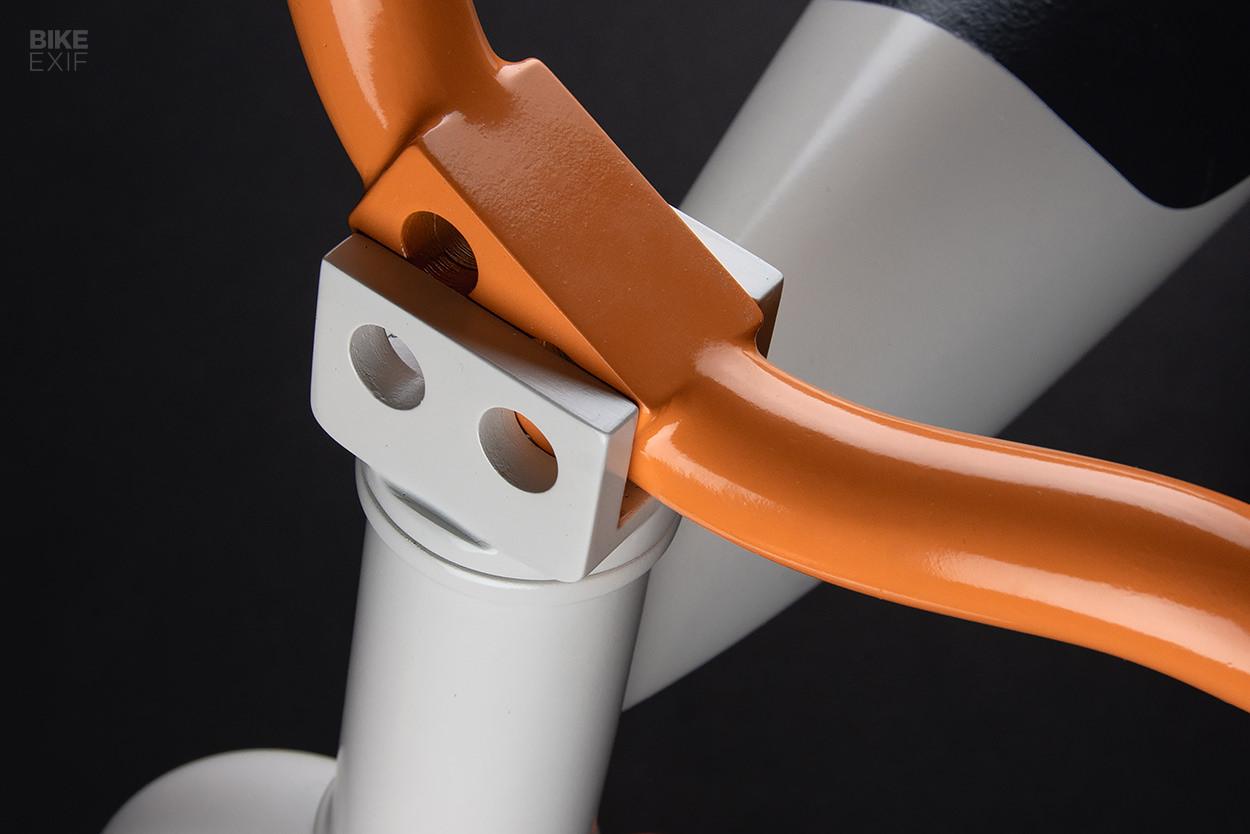 Vingla is more than just cutesy though. Rasmus spent a lot of time researching how to build something that would actually help to teach kids how to ride. And he designed it to be modular, so that the bike can not only be customized, but ‘updated’ too, as a pushback against modern throwaway culture.
Vingla and the Yamaha pair well, but the 6/5/4 crew reckon there’s one key detail missing: a rack to attach the one to the other. We’re waiting… 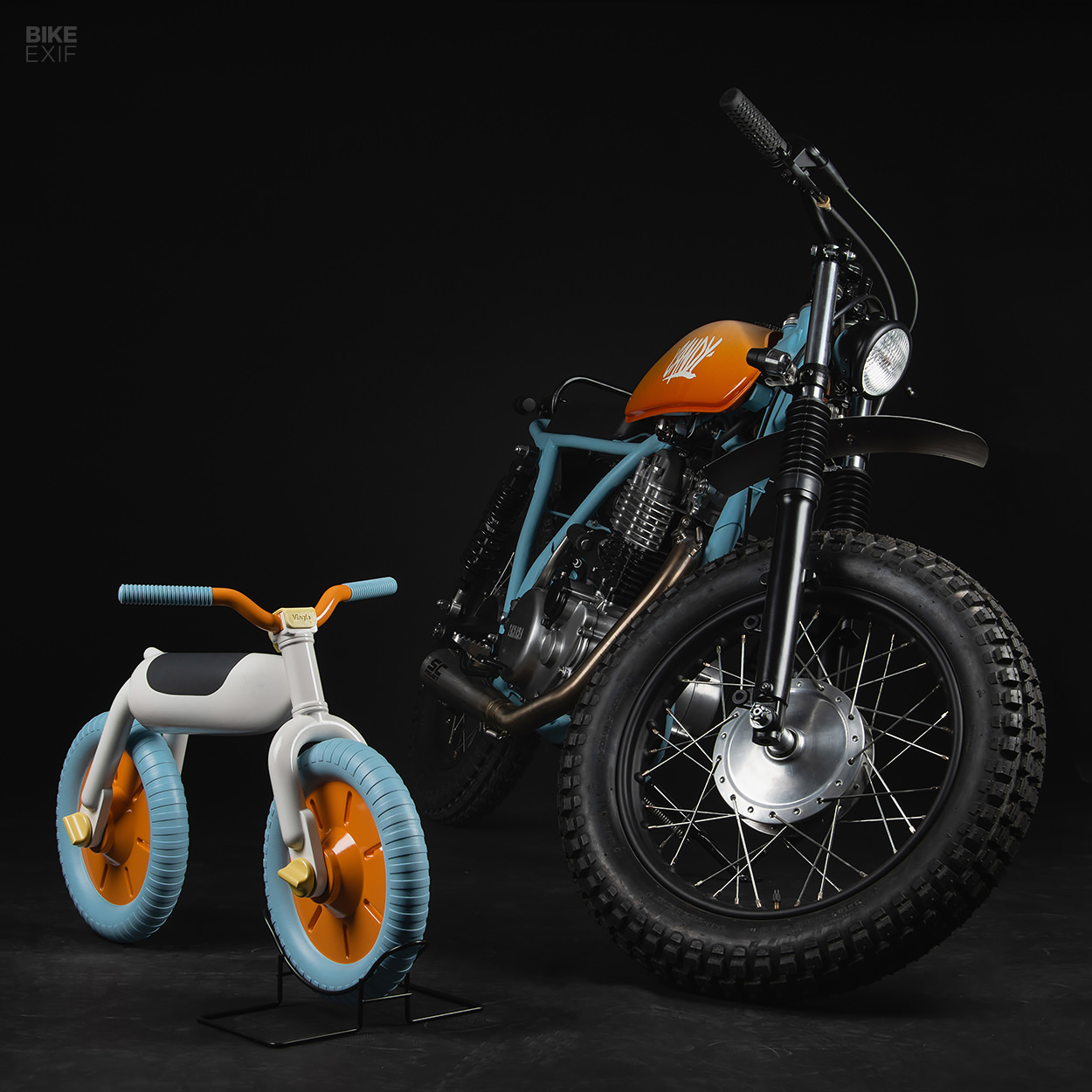