THEY SAY YOU should never do business with friends. Yet the custom scene is full of builders whose friends who have become clients—and vice versa. And if star builder Ma ‘Max’ Yicheng at 2LOUD Custom happened to be your friend, wouldn’t you be tempted to commission something?

Max and his partner Lu Yongyu have kicked out a solid stream of commercial hits already, but their most recent two builds were done for their nearest and dearest. This bodacious Honda Cub was built for a close friend (it’s his second 2LOUD custom), and at the same time, 2LOUD built a Cub chopper for Max’s girlfriend [below left]. 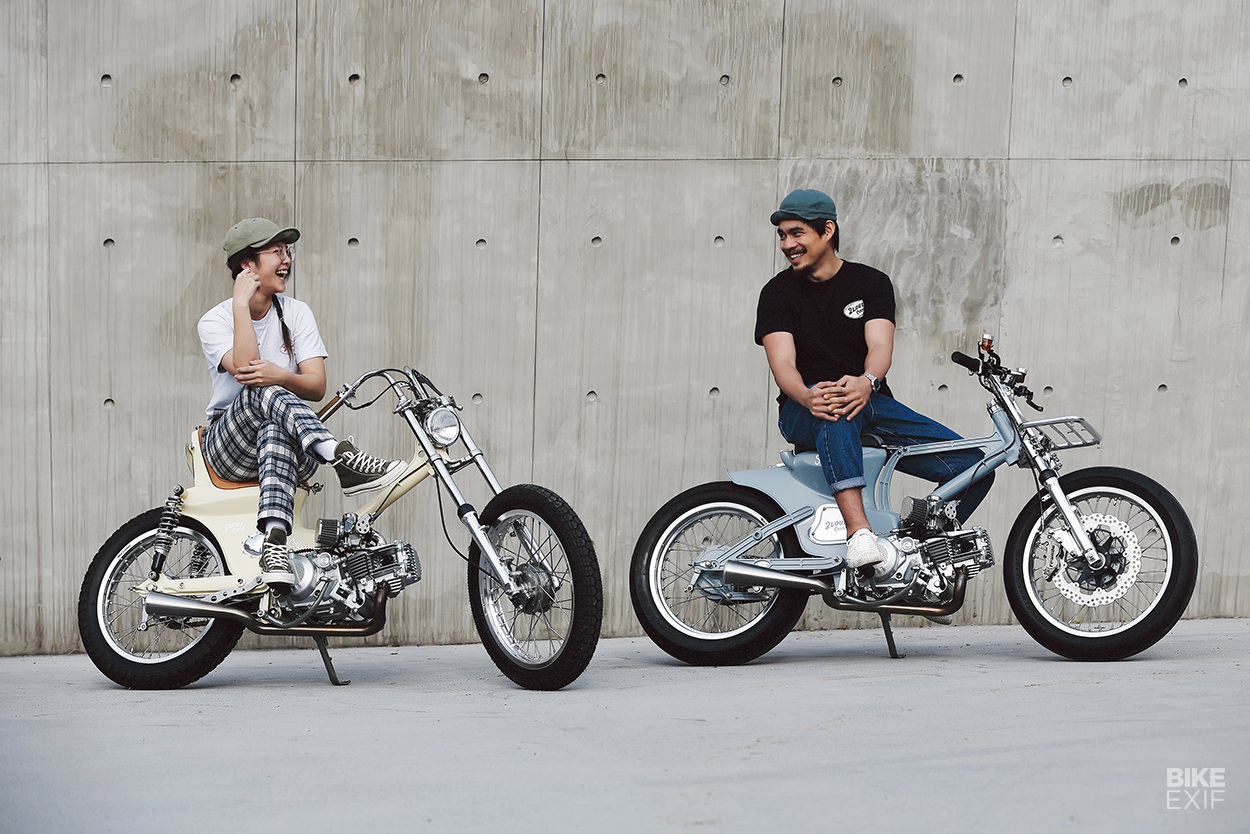 Both scoots turned out great, and what’s more, this Cub’s owner had zero creative input into the project. So we’d say the social circle is still intact.

The scooter started out as an early model 80 cc Cub, but it now has a little more pep in its step. That’s because the Taiwanese shop ripped out the motor, and crammed in a 190 cc Zongshen mill. 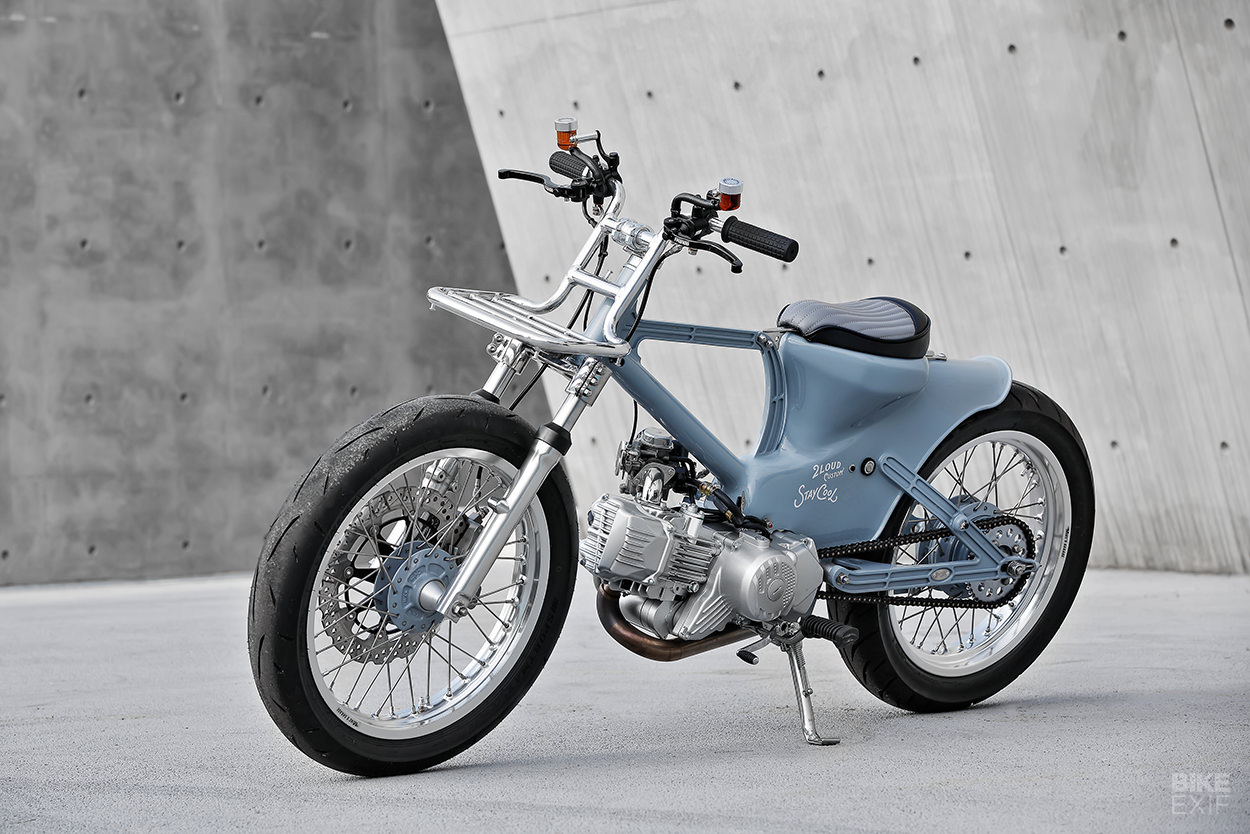 It took some frame mods to fit it, and the guys also welded in a new intake manifold—matched up to a Keihin CVK30 carb running a pod filter.

The exhaust is a custom-built stainless steel affair. “It’s not noisy while idling,” says Max, “but gives great performance.” 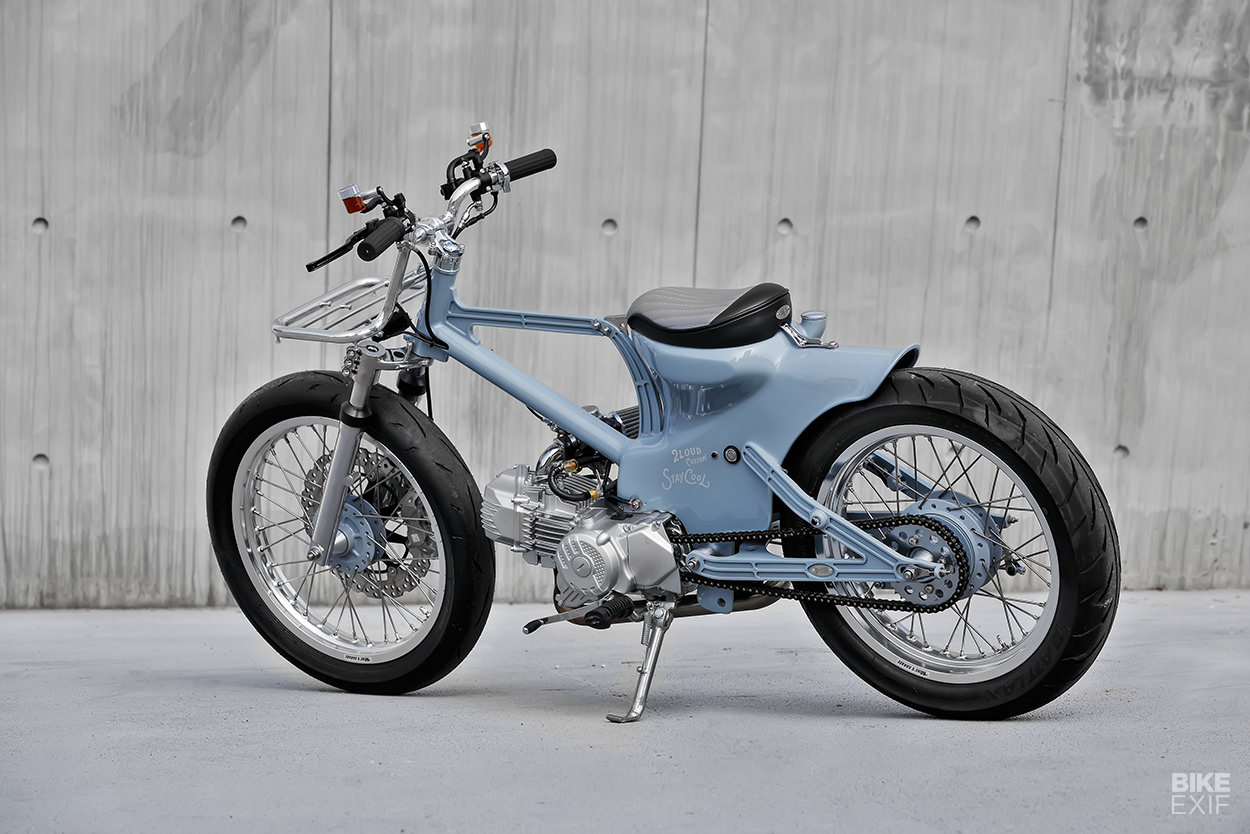 2LOUD did more to the frame than just mod it for the engine, though. They’ve ‘hardtailed’ it too, and added some reinforcing members up top. The changes were designed digitally first, before Max and Lu put the frame into a jig to execute their ideas.

Up front, you’ll find the forks from a SYM Wolf—a 250 cc commuter bike that’s popular in Taiwan. 2LOUD shortened and polished them, then laced up a pair of 18F/17R aluminum rims, with stainless steel spokes and a SYM front hub. 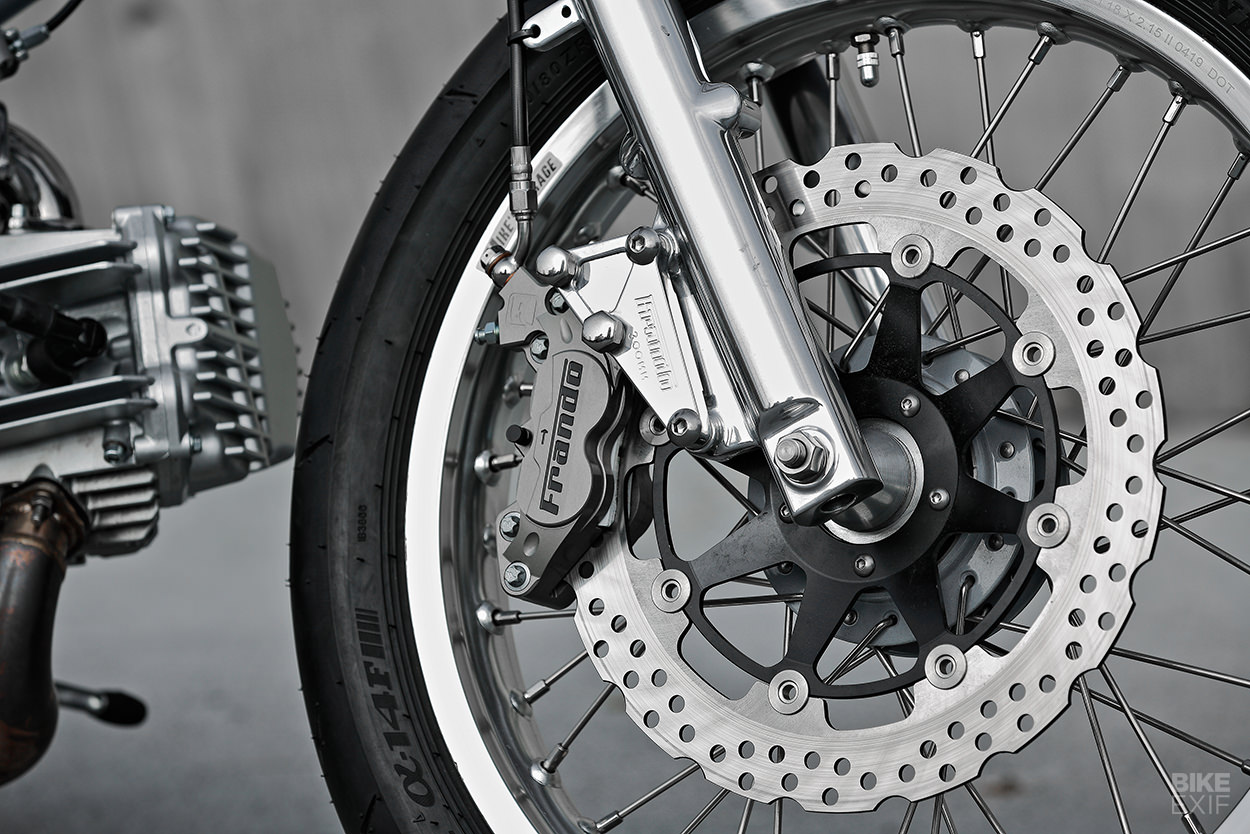 The front brake was upgraded with a caliper, master cylinder and whopping 300 mm disc, sourced from local brand Frando.

It’s higher up where things get really interesting. The fork’s been converted to a single crown design, with a custom made lower clamp. The top section features a custom arrangement that uses a mountain bike stem to hold the handlebars. 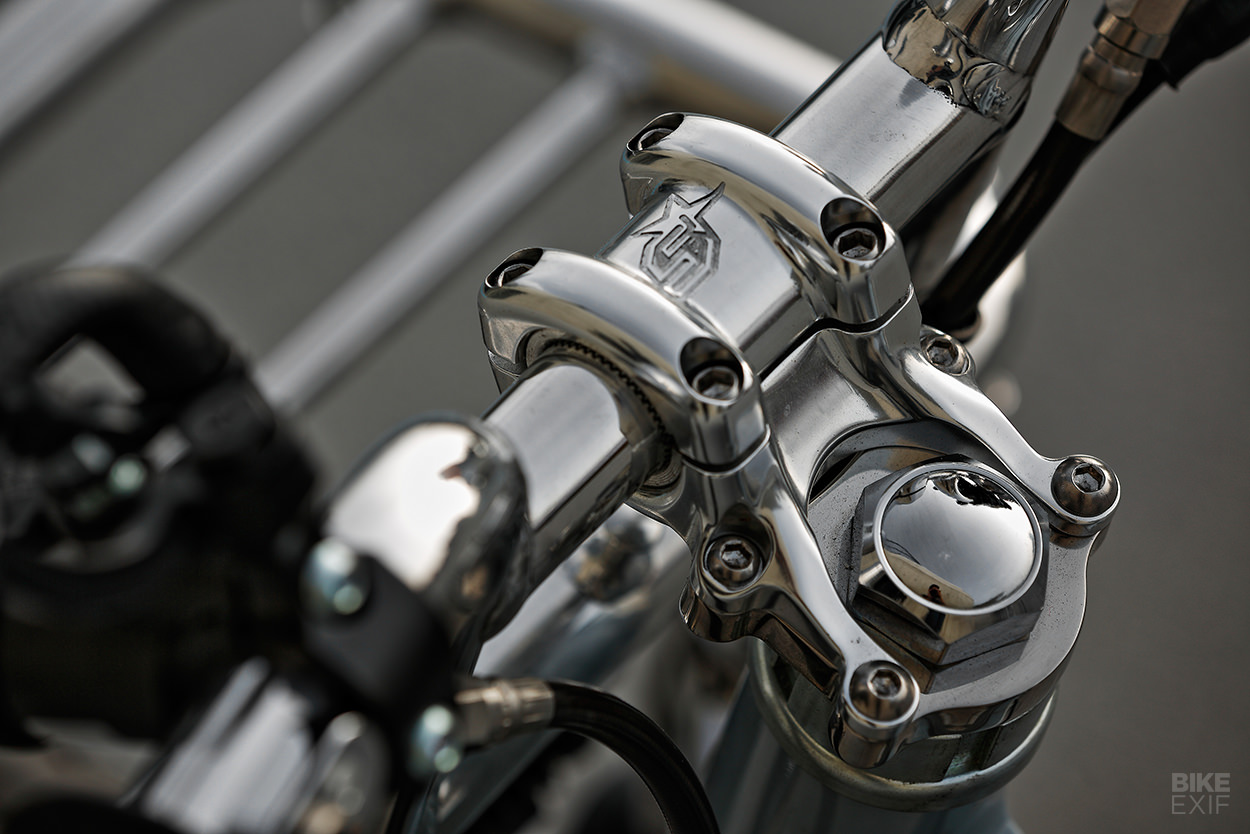 2LOUD fabricated the bars from scratch, and, if you look closely, you’ll see that they actually run all the way down into an integrated front luggage rack. It’s not meant for heavy lifting: the owner loves to barbecue, and the rack is purely for running to the grocery store for supplies.

Up in the cockpit you’ll find Fando controls and reservoirs on both sides of the bars, since 2LOUD upgraded the clutch to a hydraulic system. It’s a neat setup too, with the clutch hose running inside the frame. 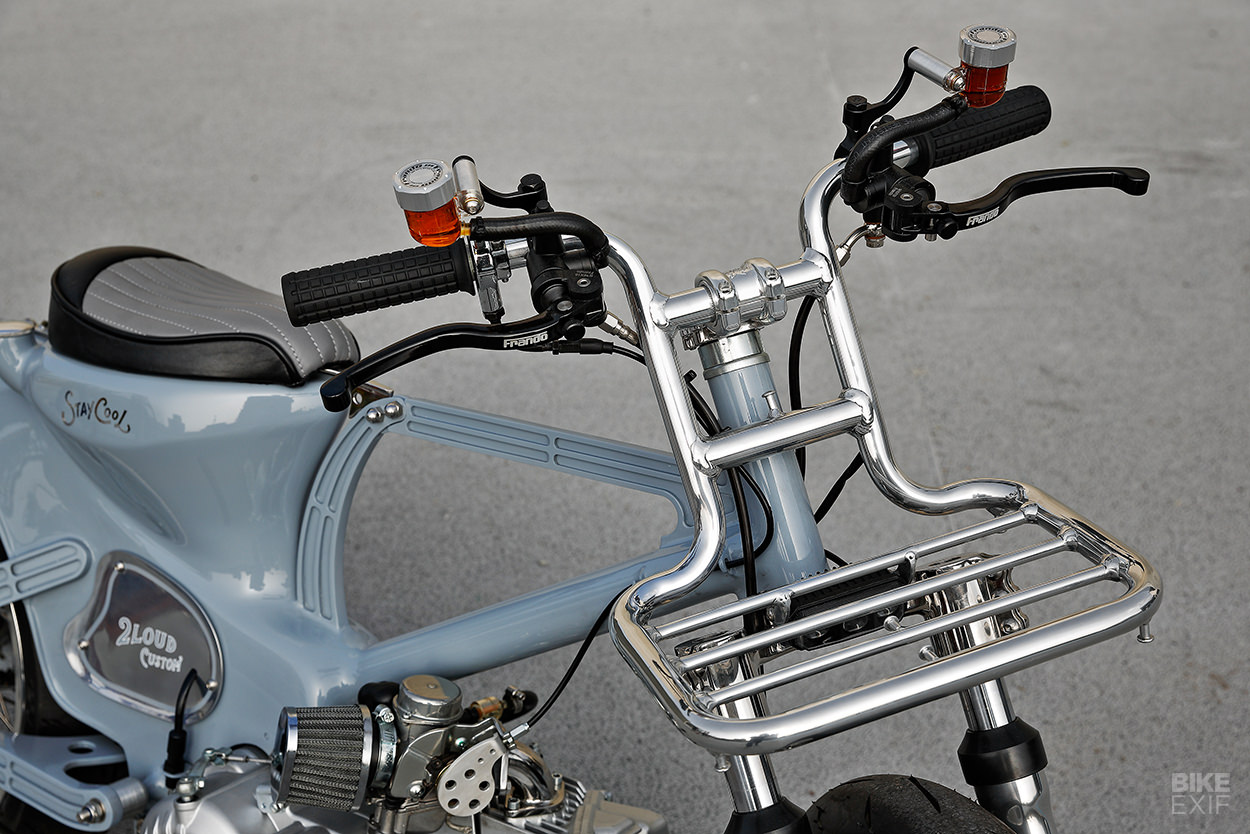 The crew made some alterations to the Cub’s main bodywork too. It’s been reshaped a bit, and a fuel filler neck grafted in, so that you don’t need to lift the seat to refuel any more. The battery now sits behind a polished aluminum side cover, and the ignition key’s embedded on the opposite side.

The seat’s covered in two different leathers, and held down via a pair of hand-made stainless steel mounts. 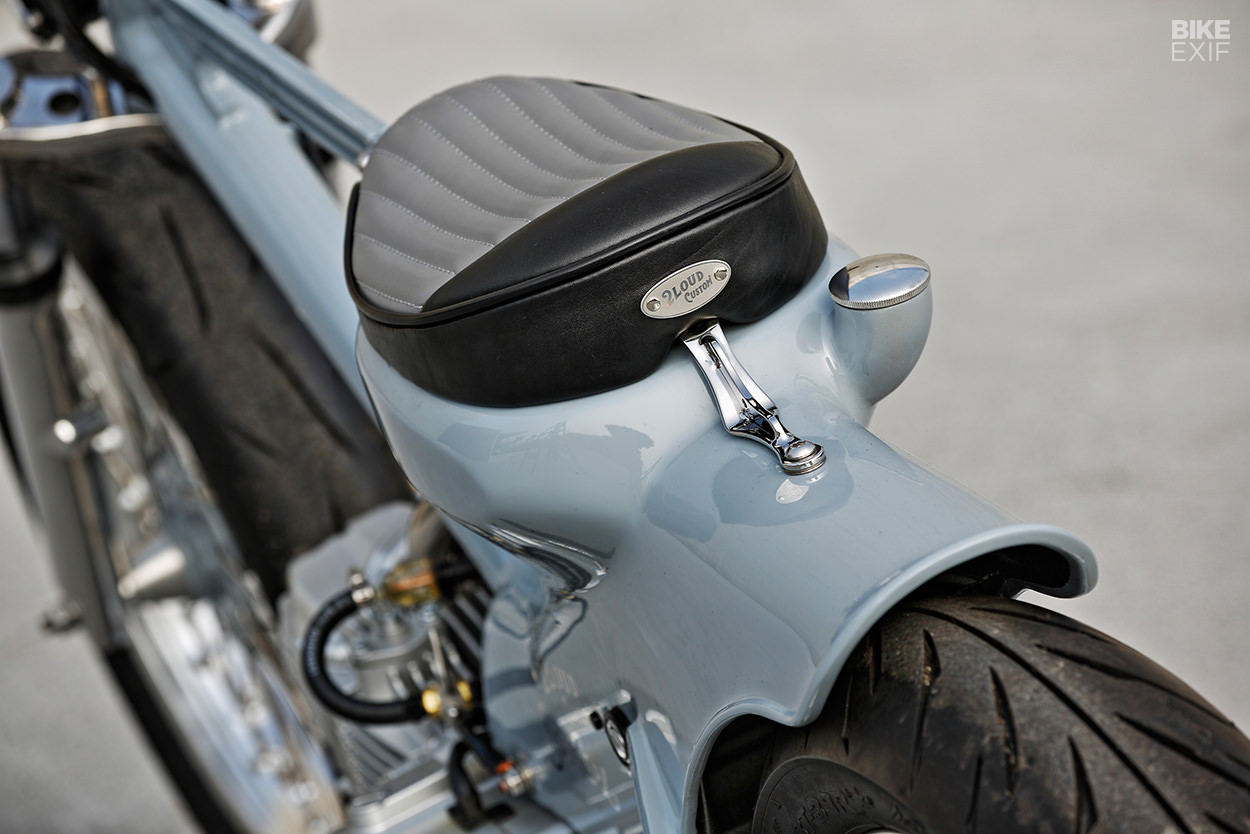 2LOUD picked a color similar to Audi’s Nardo Grey to coat the bike in, right down to the hubs. It’s a cheeky color choice, given the high performance vehicles it normally graces. The irony’s not lost on the Cub’s owner either—the other 2LOUD machine he owns is a far burlier Honda CB1100 cafe racer. 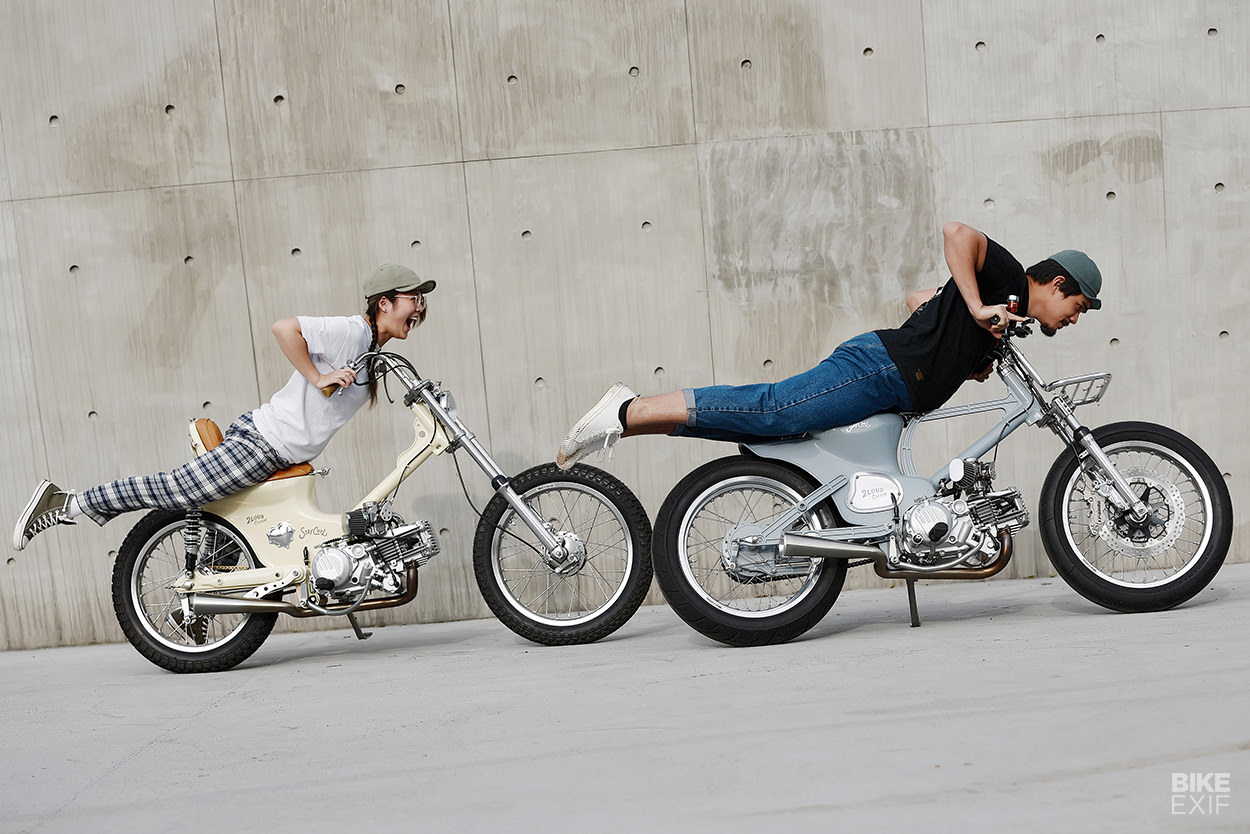 He clearly gets that it’s nice to go slow once in a while … especially if you’re doing so in style.

And Max and Lu can’t seem to put a foot wrong, even when it comes to the little ‘uns. Maybe it’s time to join a scooter gang? 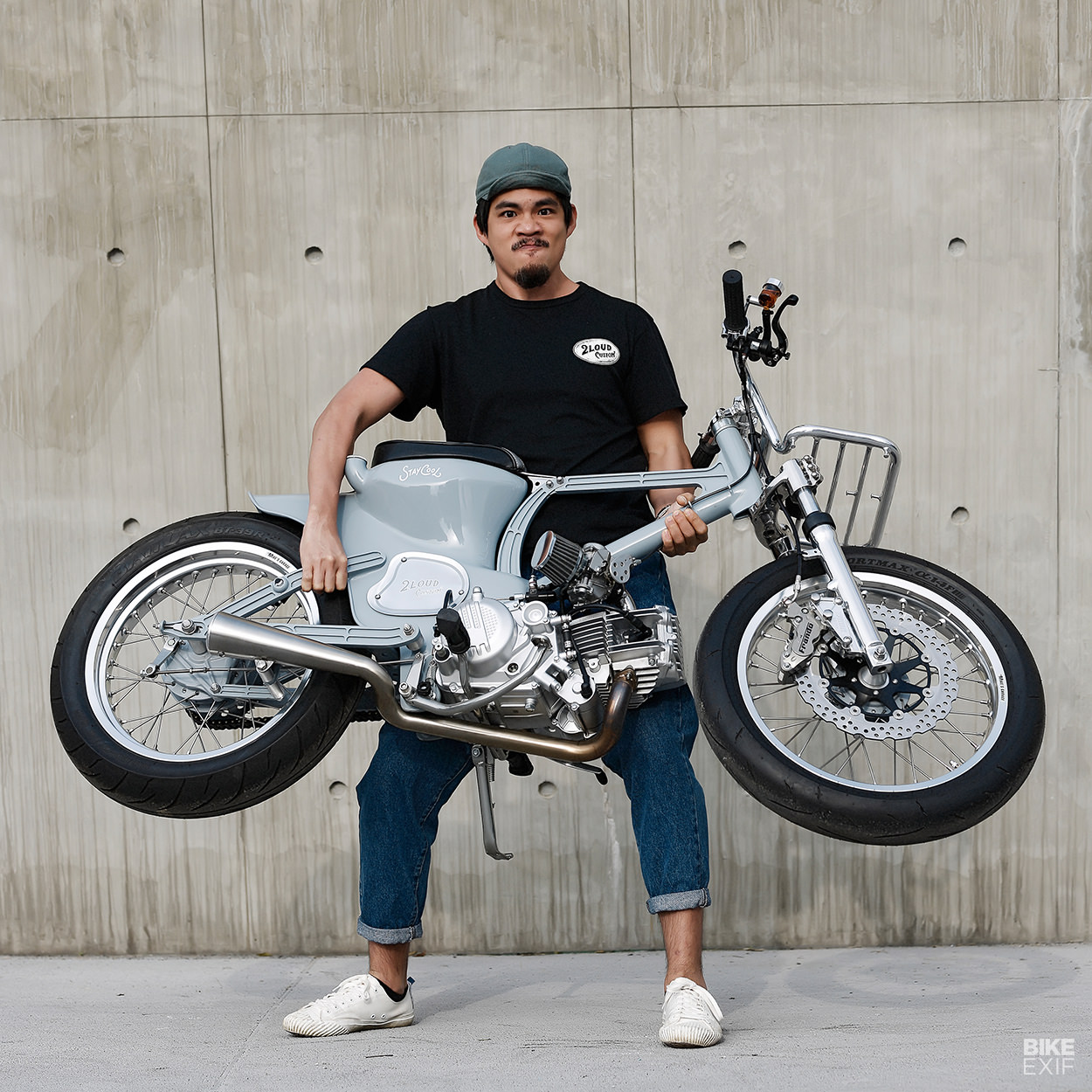