HISTORY HAS A strange habit of repeating itself. Exactly ten years ago, give or take a few days, we featured a twin-engined Norton called ‘Double Trouble.’

And now we have an even more incredible Norton, following the same format, called ‘Double H.’ It looks vintage but it’s a recent build and uses mostly Commando rather than Atlas engine parts. It’s also supercharged because nothing succeeds like excess. 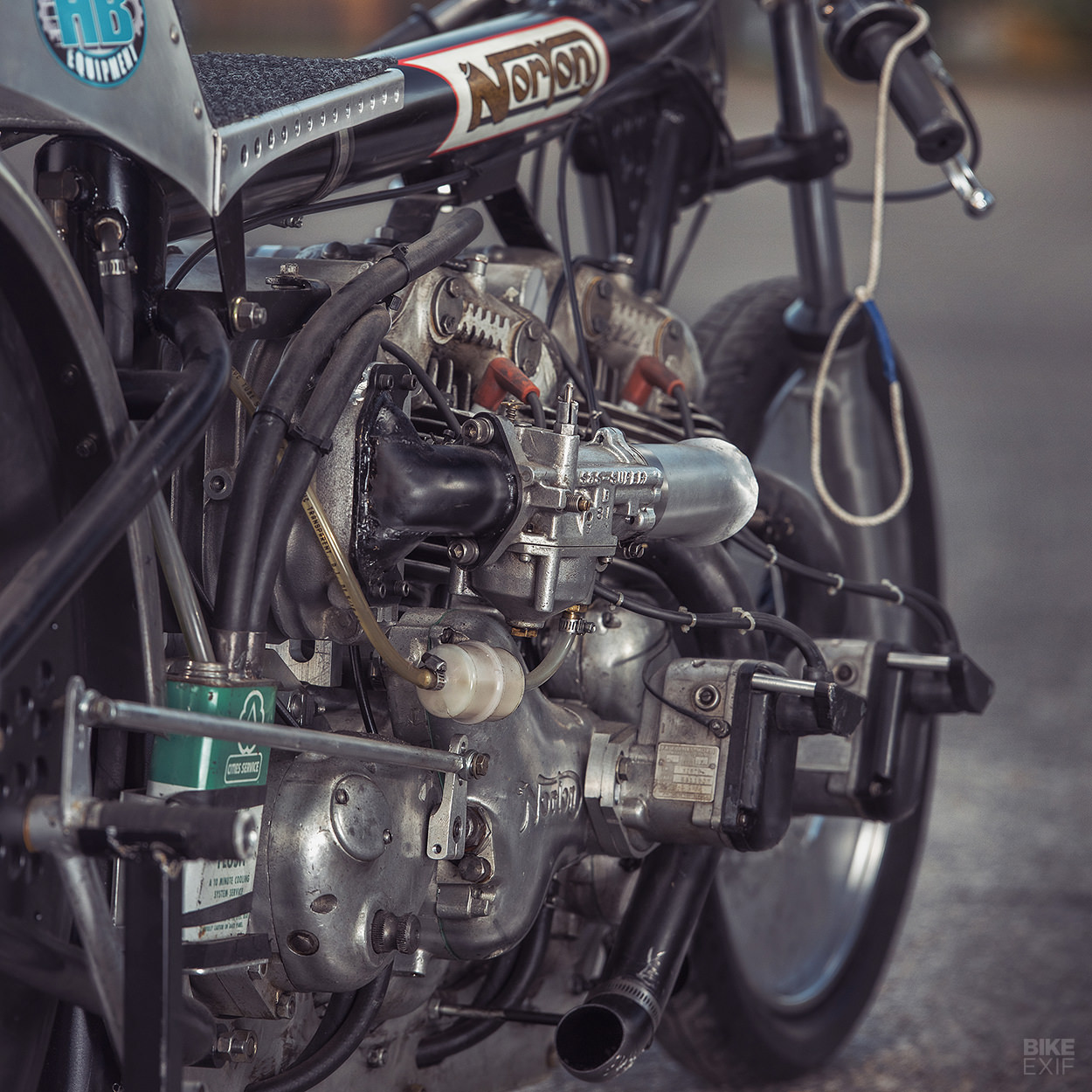 ‘Double H’ is the work of Herb Becker, a Norton racebike guru who lives in Ontario. It’s a tribute to the legendary Hogslayer drag bike, which beat the Harley-Davidsons to take home four Top Fuel World Championships.

Photographer Douglas MacRae managed to track Herb down and extract a few details about the build. “Double H is not just a mock up, but a full running bike that could make a pass,” Doug reports. 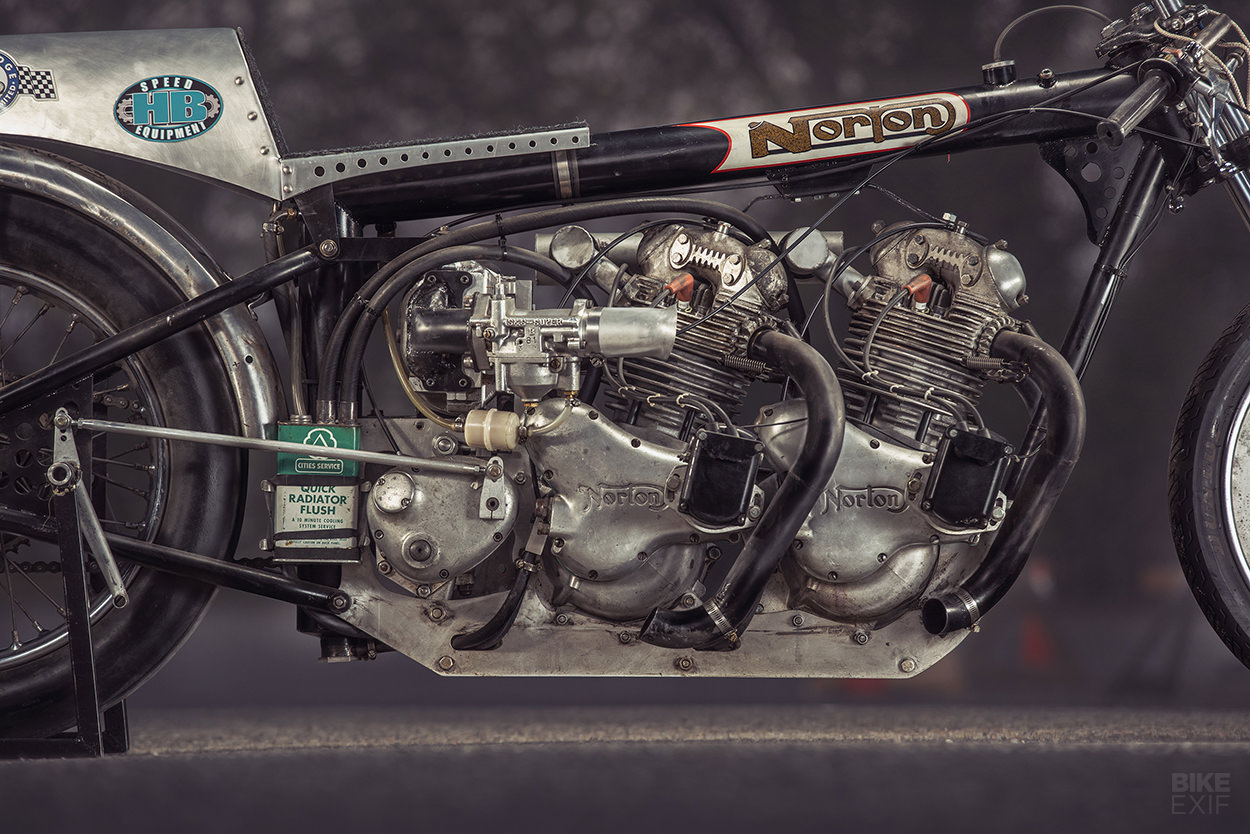 Herb is a tool and die maker by trade, which has given him the next-level machining skills and mechanical knowledge required for a build like this.

“I was into drag racing cars for many years,” he says, “and remember admiring John Gregory’s ‘Hogslayer’ twin engine Norton build. It ruled NHRA top fuel drag racing in the 70s, with T.C. Christiansen riding.” 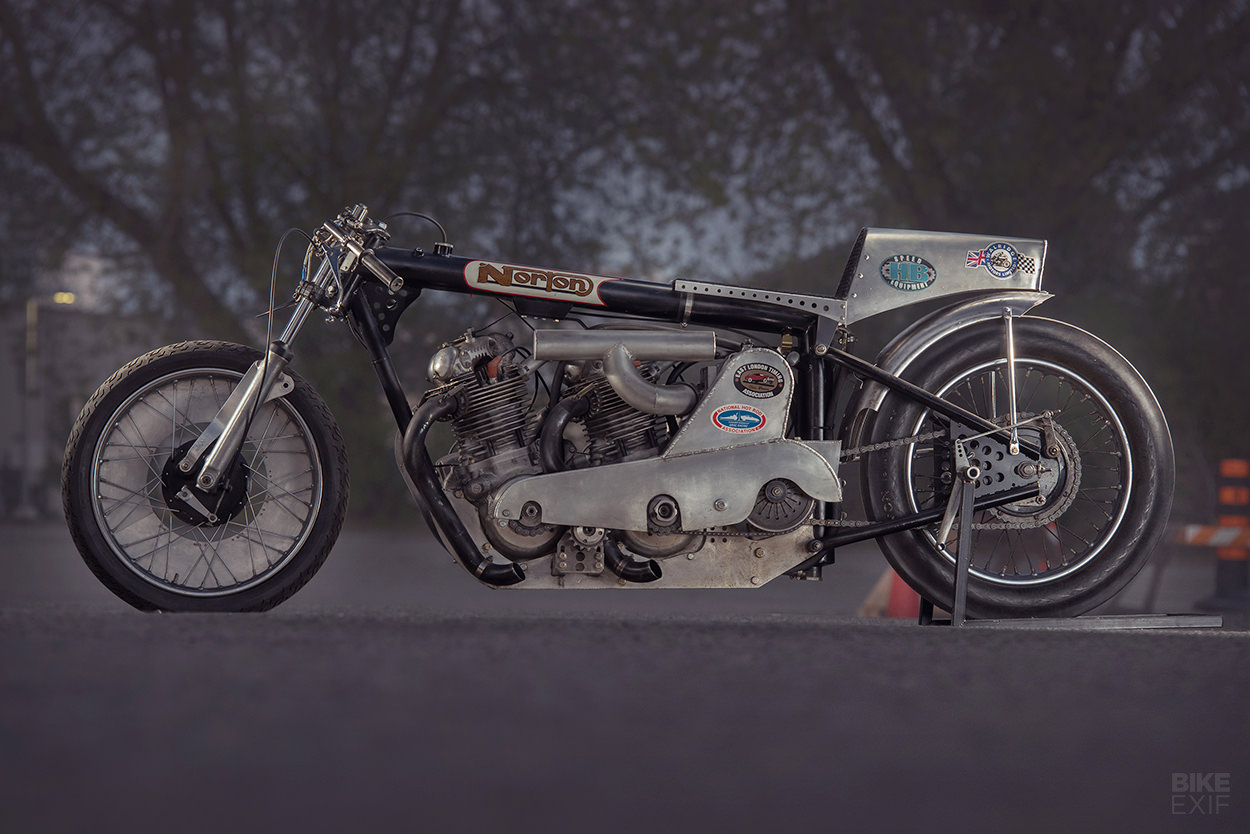 “I never thought that drag racers got the respect they deserved for their builds. Later, I got into building road race Nortons, which won at Daytona several times and took the [1998] AHRMA Sportsman 750 championship.”

Herb later restored Norton and Triumph drag race bikes, but really wanted to see a double-engine bike run again—so he decided to build one. “The bike is built from pieces I had in the shop. I didn’t have any plans to race it—just to start it up, to make some noise and excite crowds.” 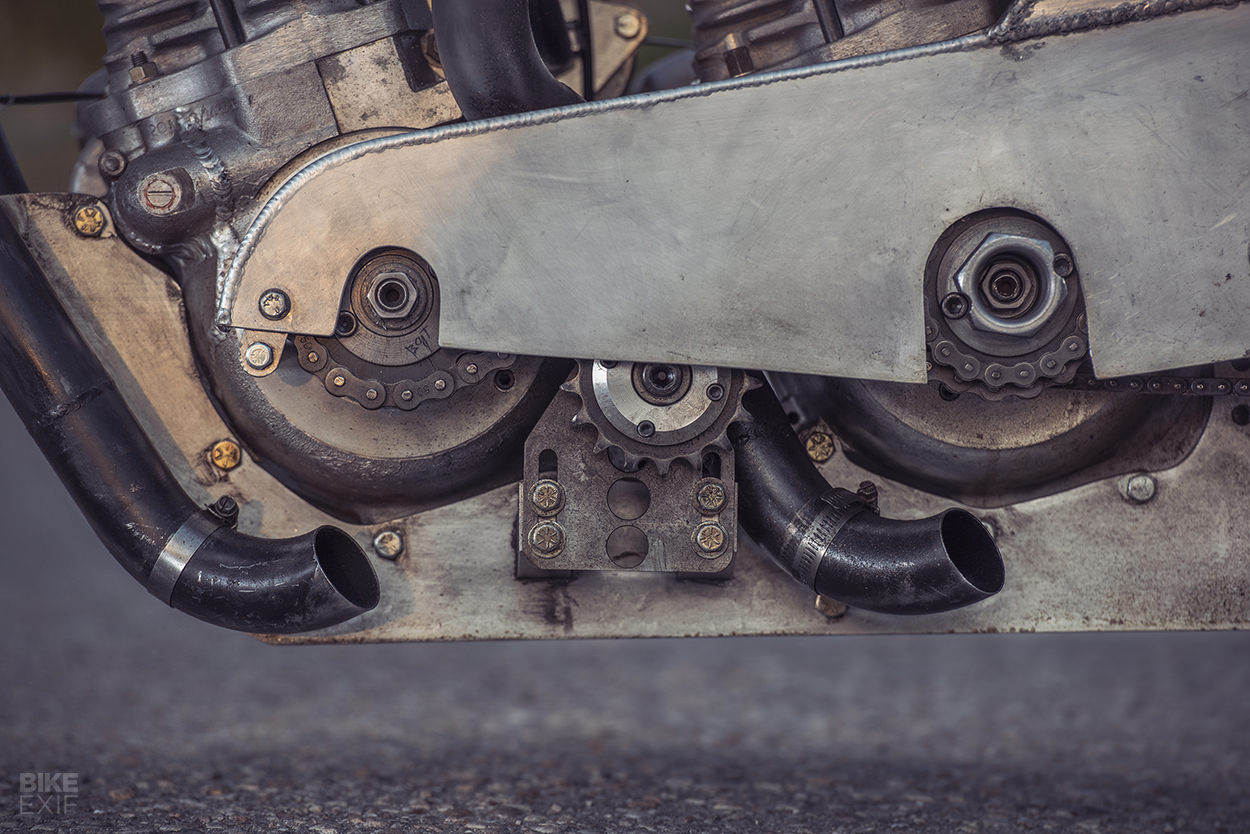 Being a Norton man, he used Commando engines, and since he had a supercharger lying around, he added that to the bike. To get the engines to work together and balance properly, he’s fabricated custom steel flywheels. “The bike idles quite well,” says, “with one engine phased up while the other is down, and running methanol.

“I just finished a custom-made Hilborn fuel injection setup; this seems to work better than the large 5-5 butterfly carb in the pictures. The engines are 765cc times two; with 15 pounds of boost, running alcohol, they should make 240 horsepower on the dyno.” 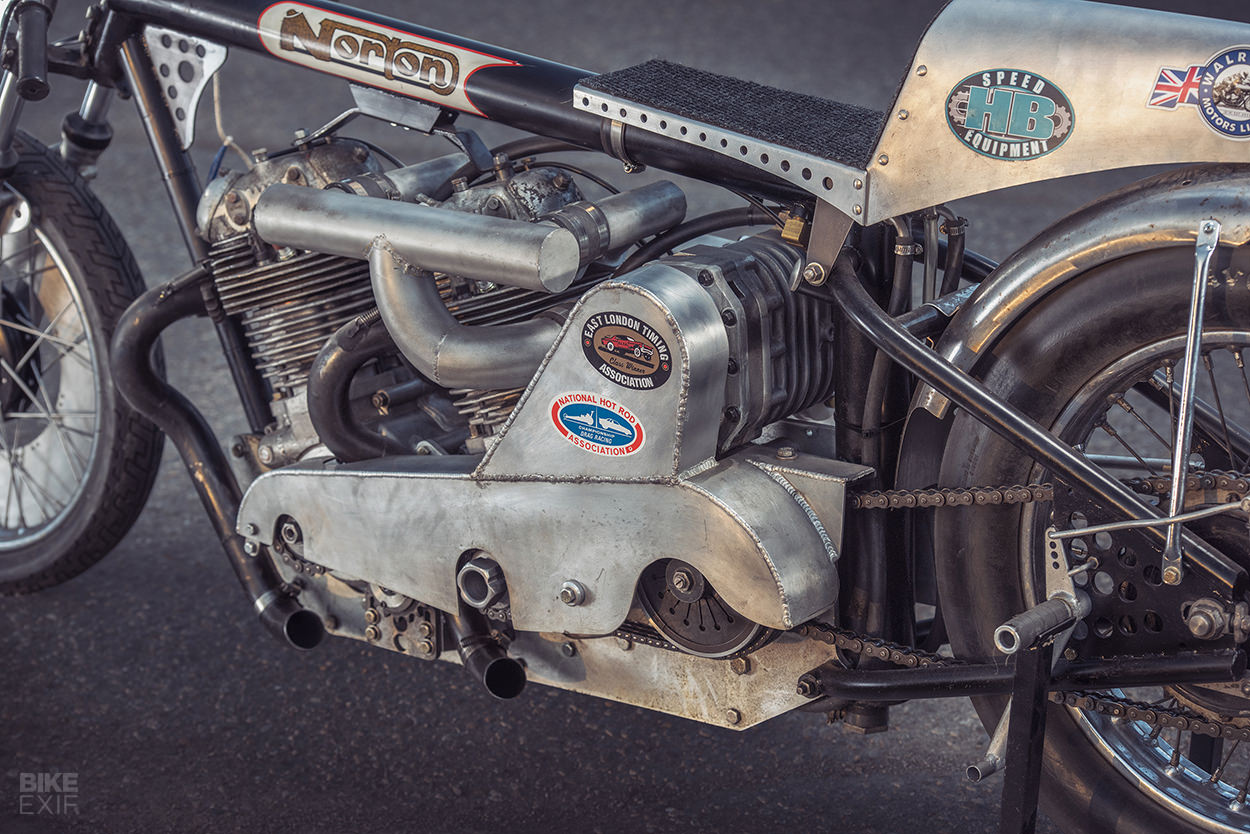 The blower is an M90 from a 3.8L Pontiac. Herb has built the engines to 7.1:1 compression ratios, to give a bigger margin for detonation, and with Atlas cases and alloy barrels.

“The few Atlas parts I had are not suitable for road racing. So I bought the aluminum barrels from another racer, who had four un-machined castings.” 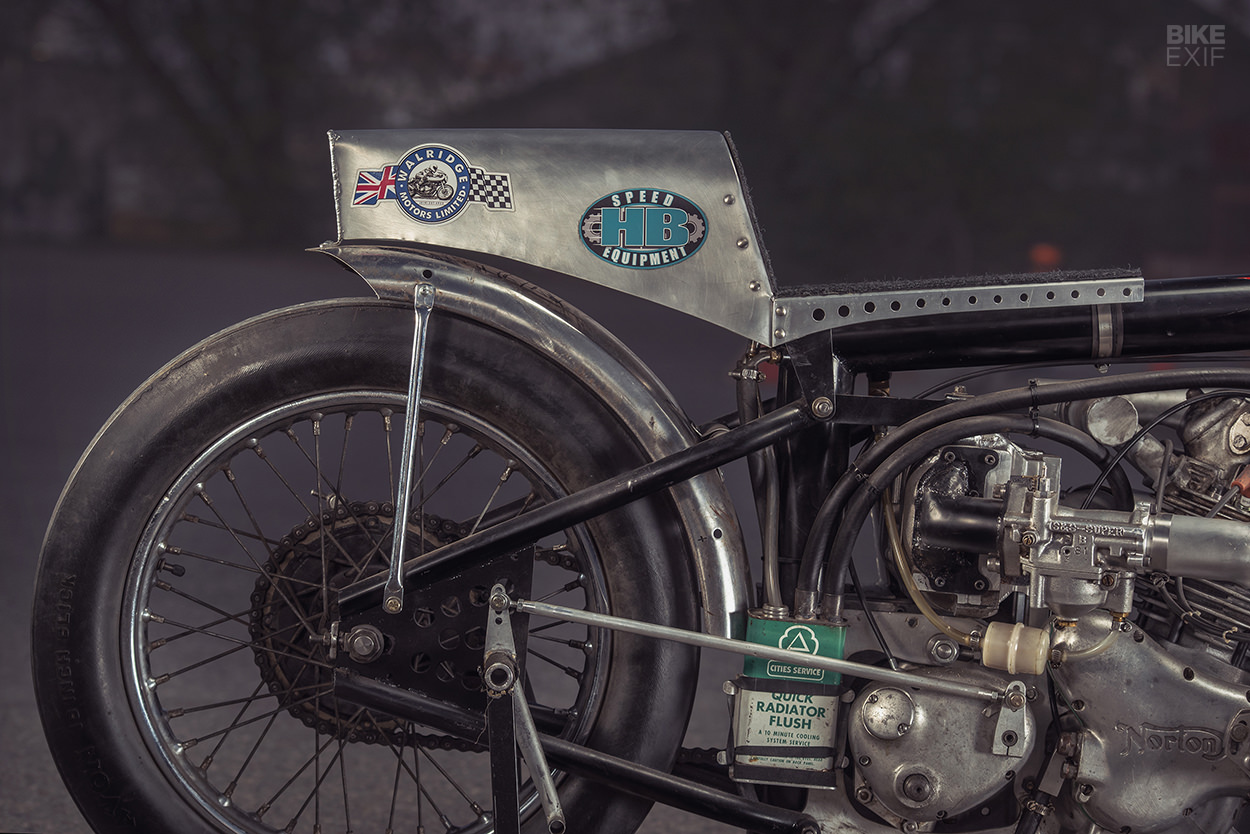 As well as building the engine, Herb constructed the chassis—with a little welding help from local shop Forrest & Forrest Racing. The tail section is purely functional, as you’d find on a battle-hardened drag bike, and shaped from 1/16″ aluminum.

This is not the sort of machine that needs to kill it on the backroad twisties, so the suspension is vestigial. The components are mostly what Herb calls ‘flea market purchases.’ “The forks are early Honda, and the brakes are Kawasaki,” he says. “The rear wheel is from a 1960s Triumph.” 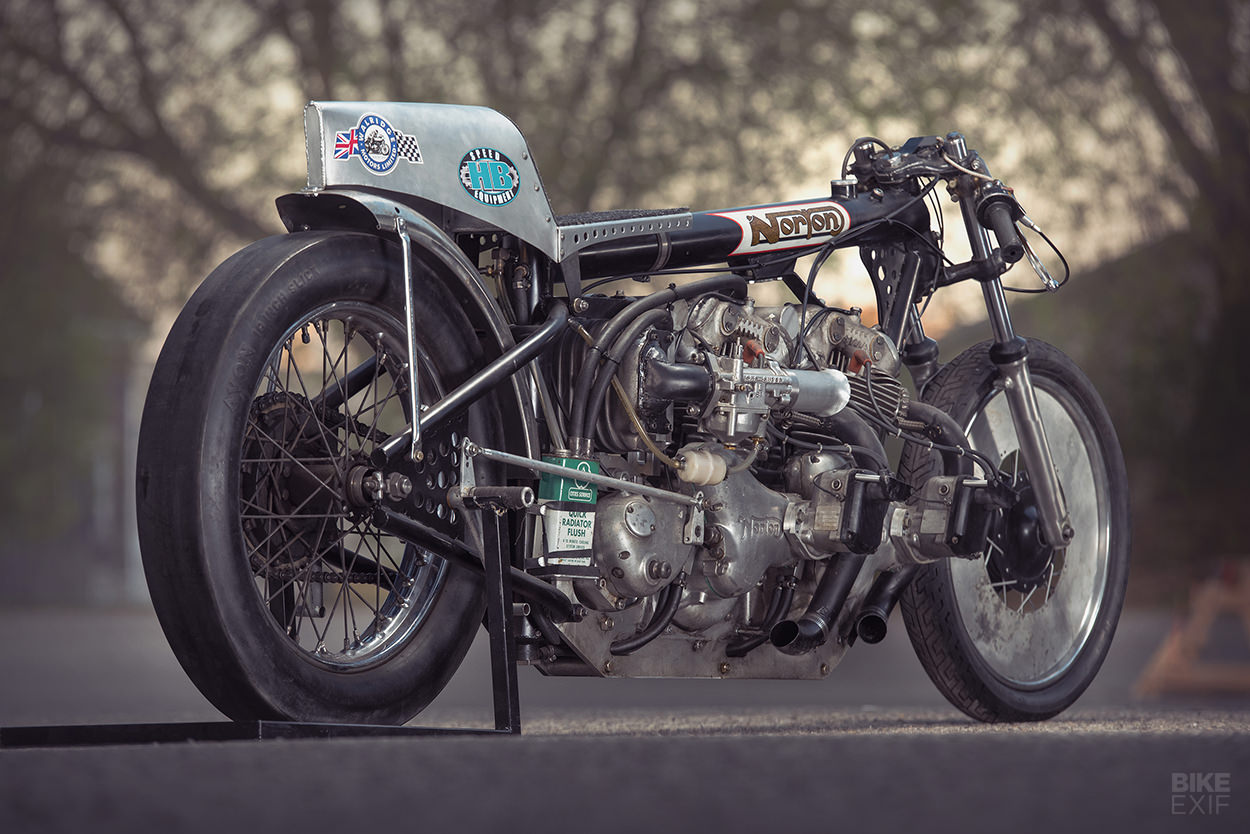 ‘Double H’ would be a magnificent career swansong for a man of Herb’s accomplishments, but he’s not stopping here. “I am currently working on a land speed racer, and am also thinking about making a second twin-engined Norton,” he tells us.

Impressive stuff. And if you’d like a print of this machine, head over to Doug MacRae’s online store, which is packed with shots of incredible vintage machinery. 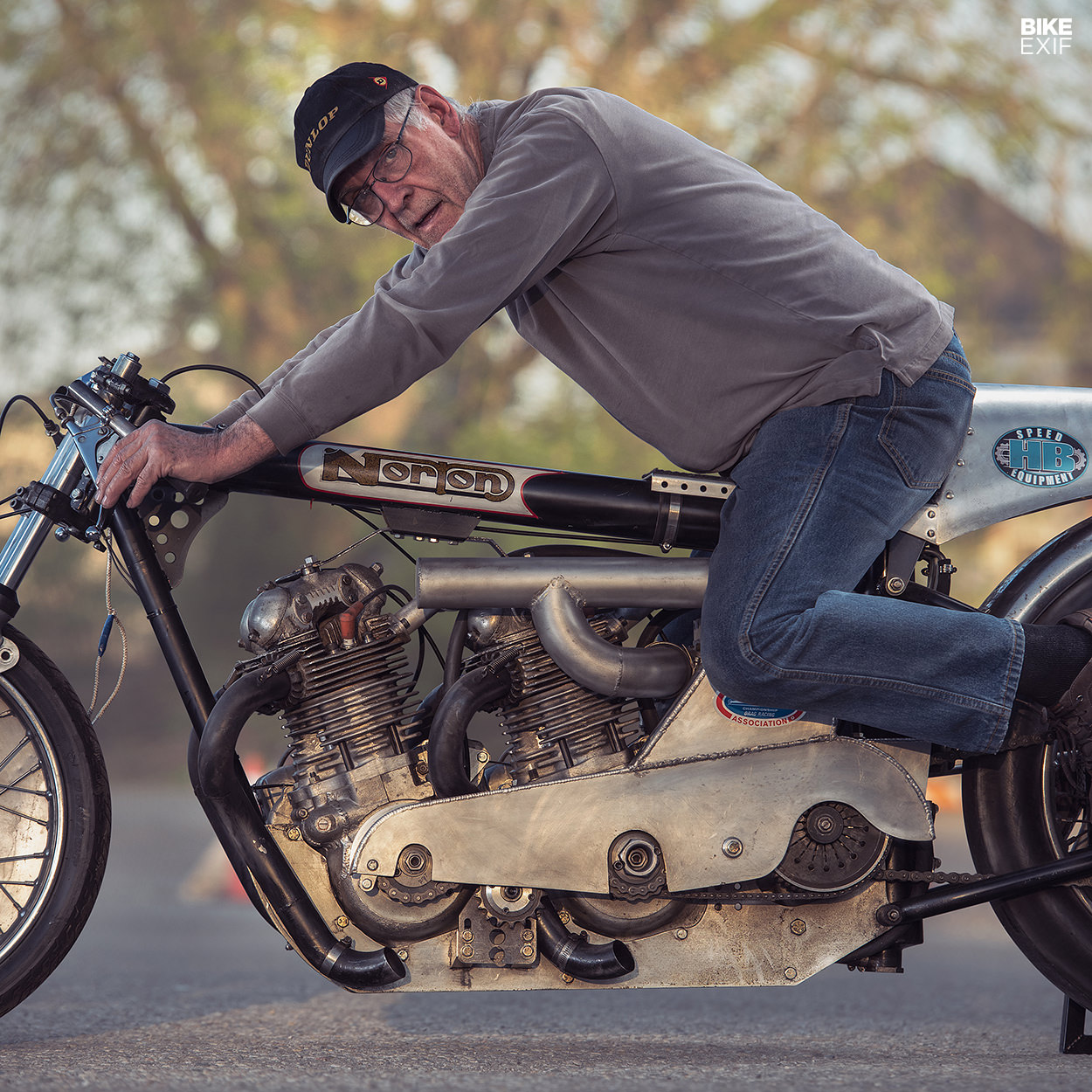