THE MOTORCYCLE DESIGNER Pierre Terblanche is famous for his Ducatis, but not always in a good way. Most folks would give the SportClassics and Supermono a big tick, and there are a lot of folks who also like the Hypermotard too (this writer included).

But for every hit from the South African designer, it feels like there’s a bike that missed the mark, such as the first-gen Multistrada and the late 90s SuperSport series. Which is good news for custom fans, because no-one cries foul when builders cut them up. 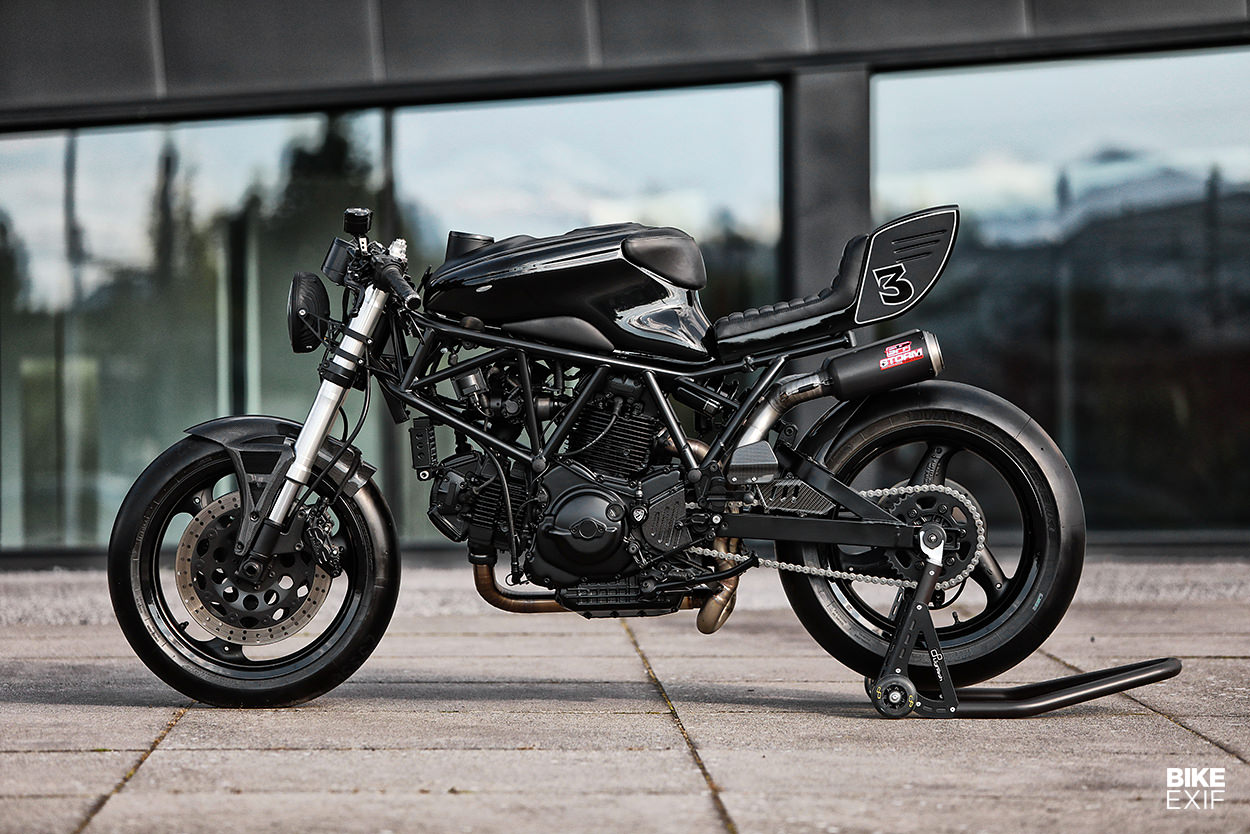 This stunning, blacked-out 900 SS is called ‘Livia Special,’ and is named after the owner’s daughter. It comes from Laurent Kesteloot and Pascal Demeulemeester, who are veterans of the European Sultans of Sprint drag challenge and run the Belgian workshop KD Motorcycles. (No prizes for guessing how they chose their business name.)

The build was a client commission, and the 900 SS had only 9,000 kilometers on the clock when it arrived in the workshop. Despite its age, it was in ‘as new’ condition. 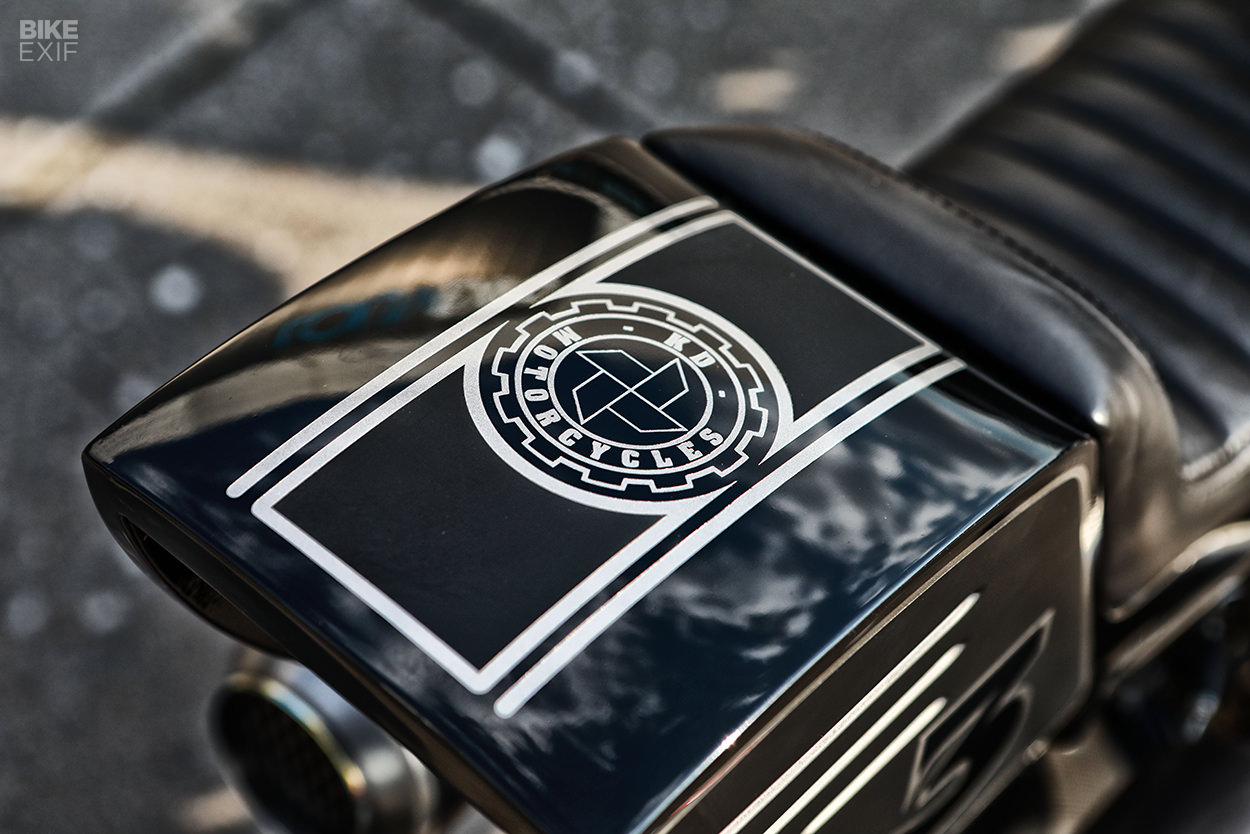 KD have ditched the bulbous fairing and tail unit, but kept the tank—which works just fine as a coherent design on its own. To extend the angular lines, they’ve changed the back of the frame too, but this is not a typical ‘café loop.’

Using traditional frame building tools and steel tubing, they’ve created stubby outriggers that terminate right underneath the seat pad. Then the frame was shipped to AB Decometal in Paris for a coat of smooth black powder. 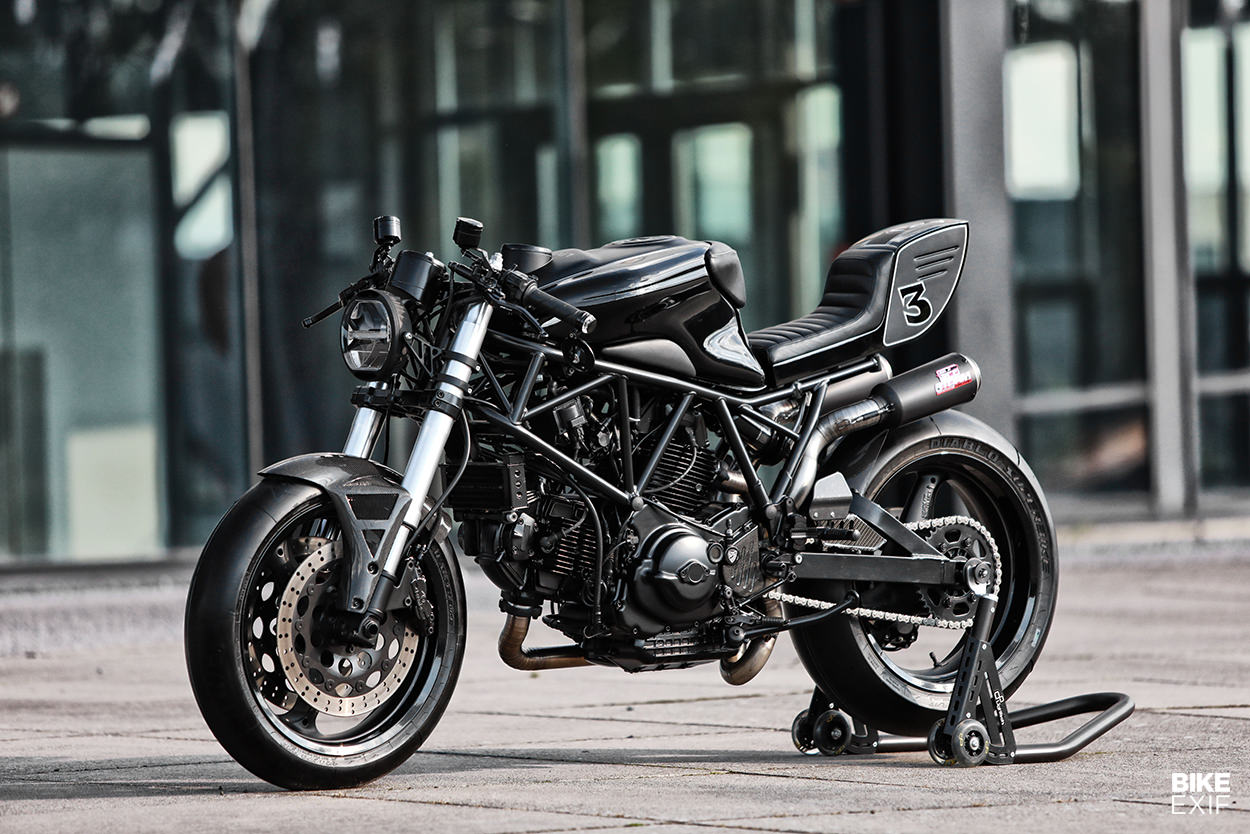 Local moto specialist Cuir Concept upholstered the very neat pad, and slots into a hand-made tailpiece built by KD themselves.

It’s not the usual smooth café racer tail, but the blocky shape echoes the styling of the tank perfectly. These guys have got the ‘eye.’ 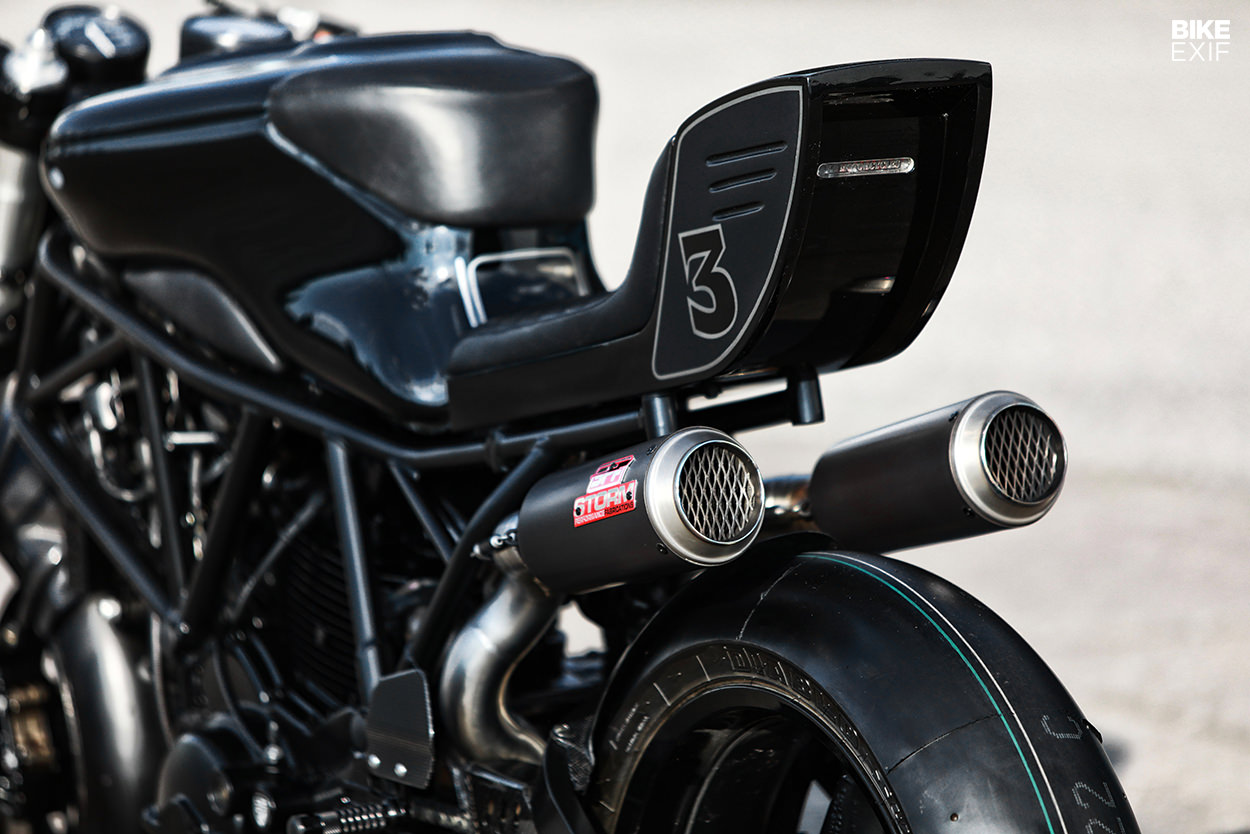 The LED rear light assembly embedded into the back of the tailpiece was constructed by French builder Ludo of Crazyracers, and took 24 hours to complete on a 3D printer. It includes no less than 24 individual LEDs.

The 900 SS has also been treated to a full rewire, feeding into a Koso LED headlight, Motogadget blinkers, and a keyless start system provided by Hot Road Choppers. CNC Racing master cylinders and levers now grace the bars. 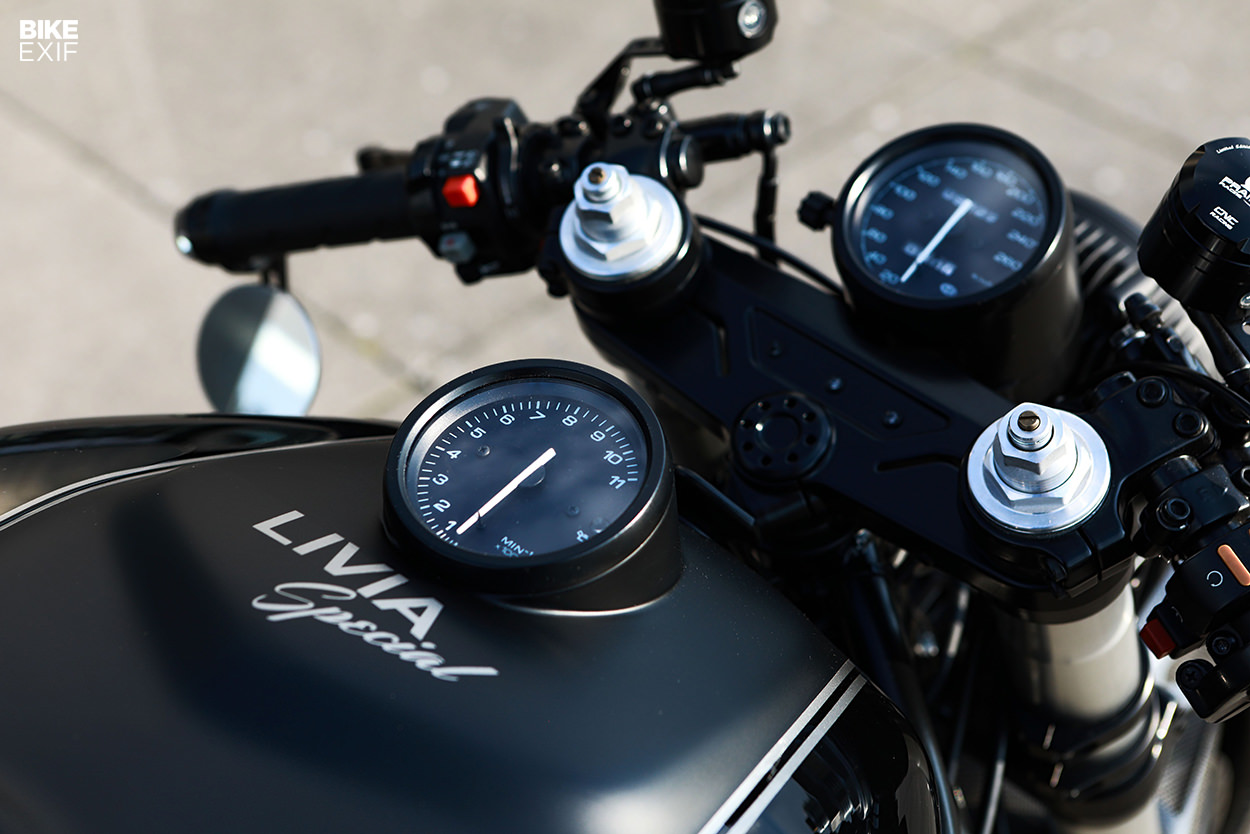 Equally professional is the integration of the tachometer into the fuel tank—a seamless factory-look installation that also reduces clutter around the bars. After precision-cutting an opening for the tacho, KD machined up a steel ring to hold it in place, created a fiberglass housing and then waterproofed everything carefully.

The 90° V-twin was in pristine condition, so KD have left the internals alone. But they’ve swapped out some of the covers for carbon caps, and worked with BG Garage Custom to build new TIG-welded headers. These are topped off with mufflers made by Phil Smith from the British race specialist Storm Exhausts, with custom dimensions supplied. 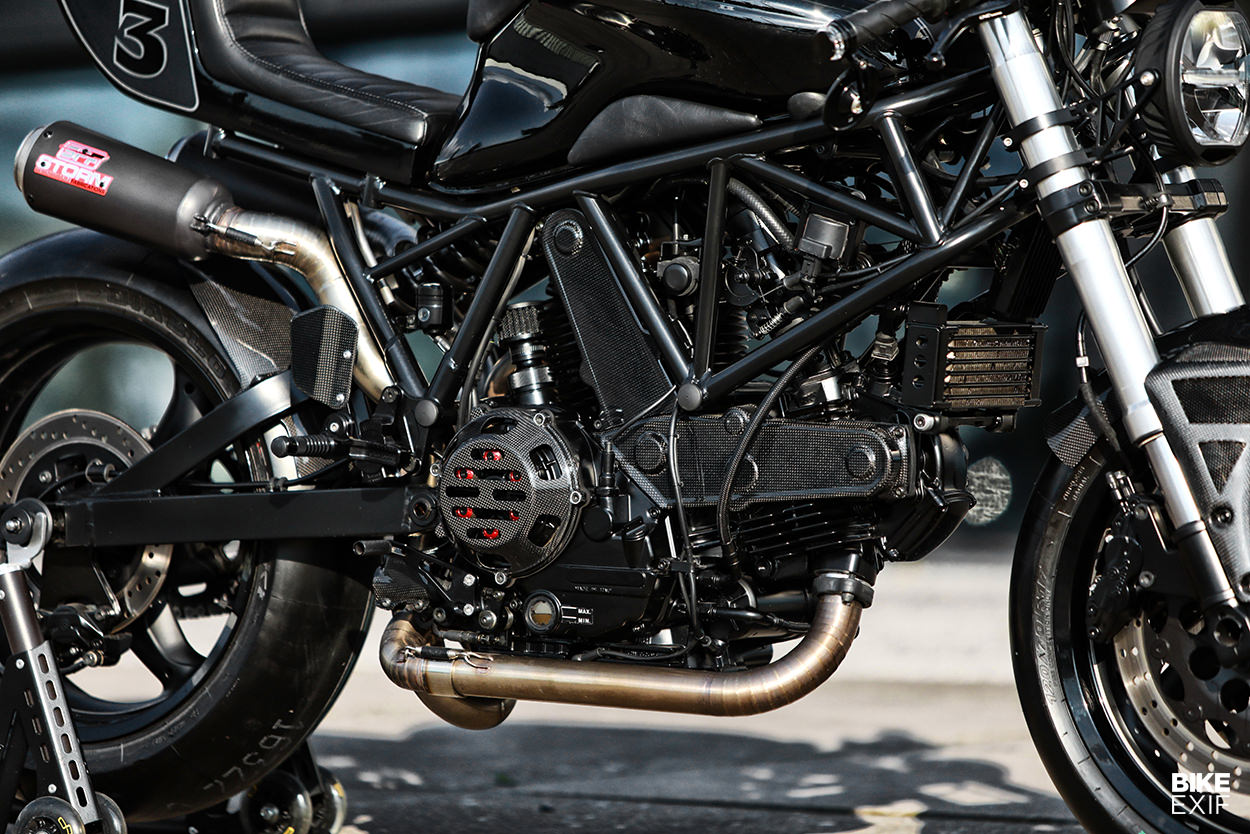 The fenders are carbon too: there’s a rear hugger and a ‘Fogarty’ WSBK front fender from the Spanish company Carbon4us. Right underneath are smooth Pirelli Diablo Superbike slicks.

The 900 SS is a terrific platform for a custom job, and with a monochrome finish from Aerographik in France, this one looks the business. Looks like it’s time to check the classifieds for a cheap, low mileage SuperSport again … 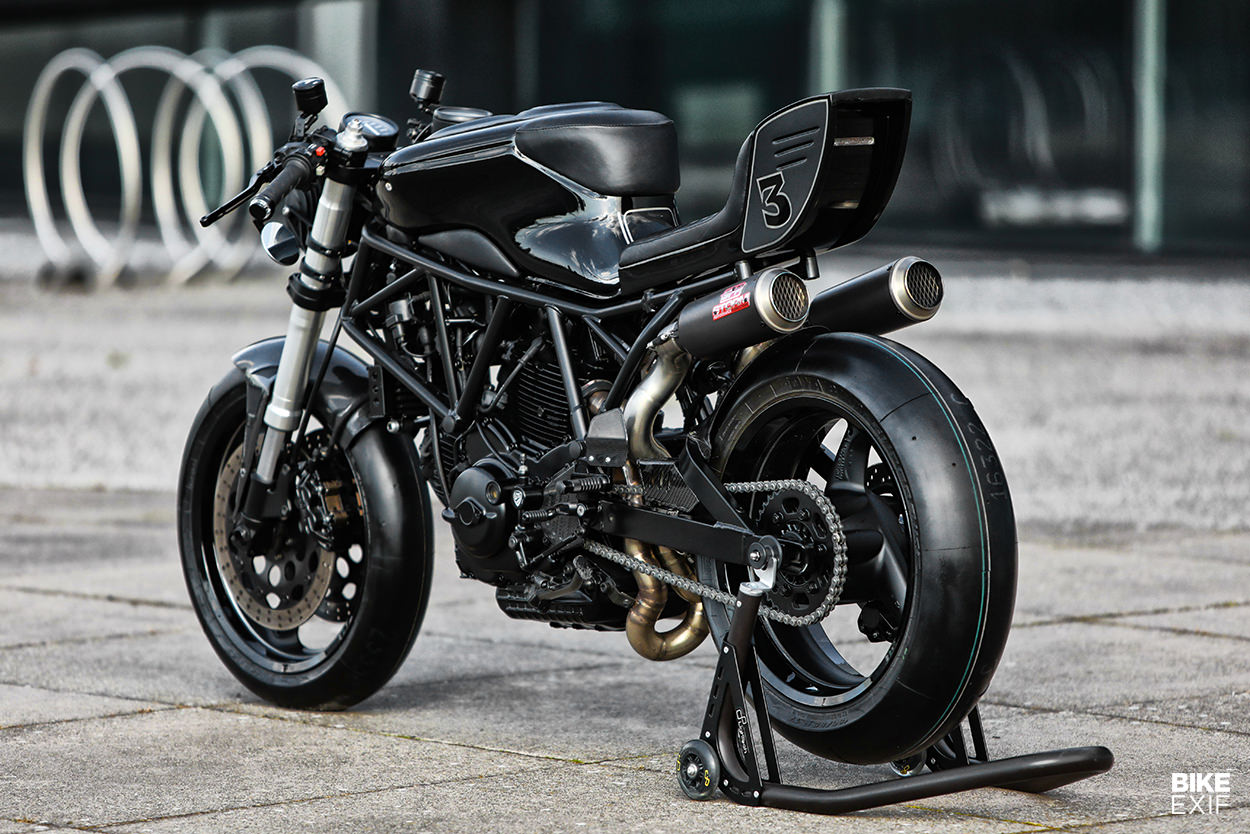