Skip to content
🎃HALLOWEEN SALE🎃 50% OFF TODAY ONLY Free Shipping Available
Risk-free returns 30-day Return Policy
100% secure checkout
FACTORY-MADE MODERN classics are everywhere these days, but they’re usually premium motorcycles at the upper end of the engine size scale. If you’re looking for a low budget, small capacity bike with retro style, your options are fewer. Unless you live in Australia.
Down under, you can get a Sol Invictus Nemesis 400 Scrambler for AU$5,999—less than half the price of a Triumph Street Twin. Granted, it’s a far more basic bike: an air-cooled, carbureted single that makes an honest 27 hp and is made by Shineray in China. It’s essentially a copy of the Honda CB400SS … but it’s also a looker, and a great candidate for customization. 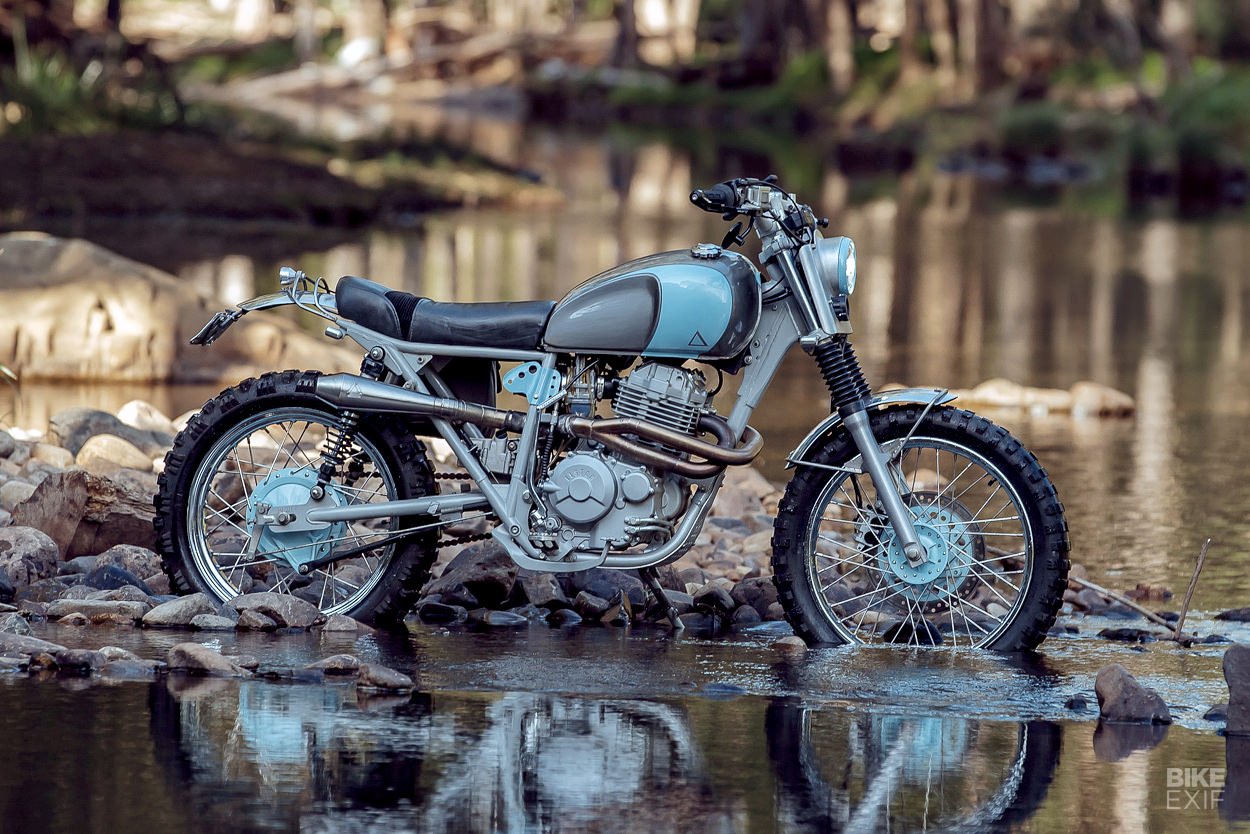 Tom Gilroy at Purpose Built Moto recently ended up with a Nemesis 400 on his bench. Like his own Sportster, it would have to tackle varying terrain along the Great Ocean Road and on to Tasmania, for PBM and Electric Bubble’s Wide of the Mark film project.
All the bikes on the trip had to look good, but also be able to suffer some abuse. “The whole idea of this build,” explains Tom, “was to take a sleepy little commuter, give it some teeth and build it unbreakable for a two week off road adventure.” 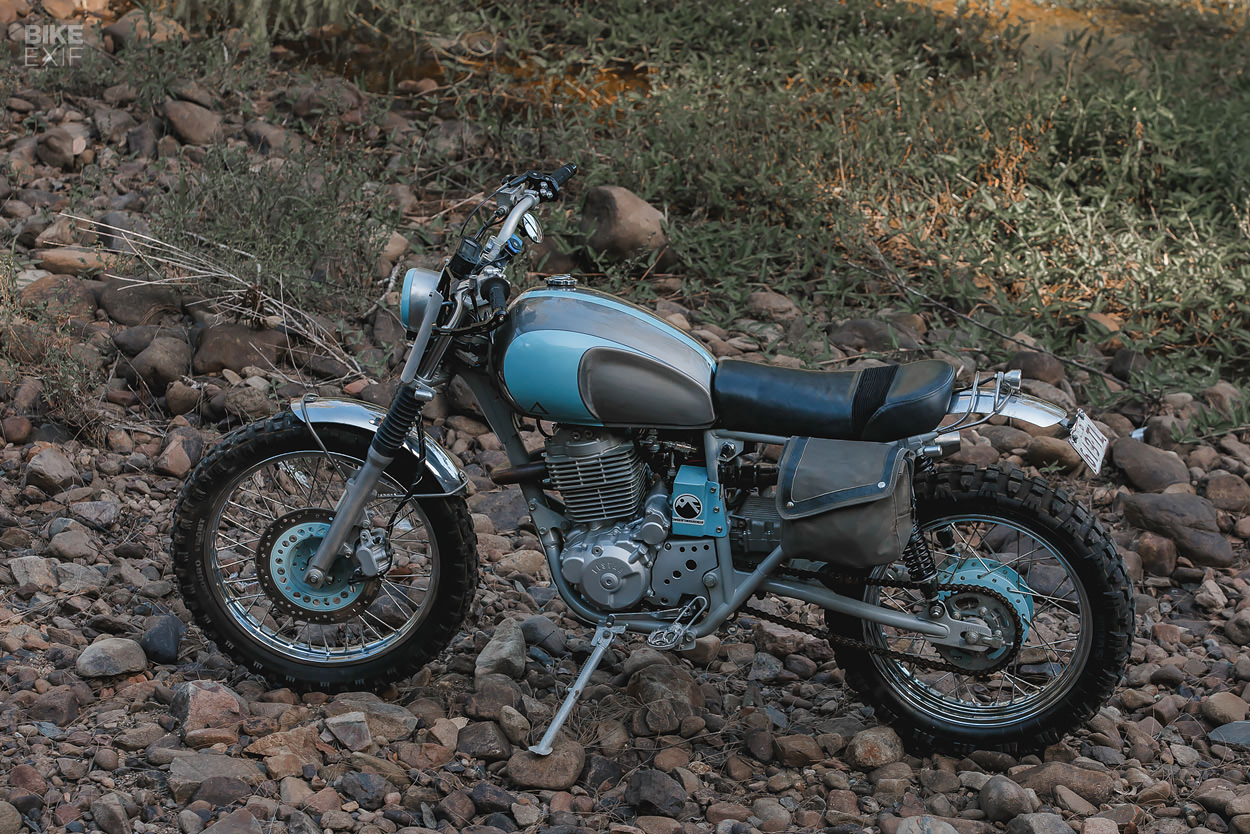 “It had to be reliable, able to carry a decent load, and be tough enough so that when it was inevitably crashed, you could pick it up, kick it over and go again.”
Once Tom had stripped the bike down, he kicked the project off with a few practical considerations. The 19F/18R wheels were relaced with tougher-than-OEM stainless steel spokes, and the tires were traded for a set of grippy Mitas E-09 enduro items. A set of longer travel Gazi shocks added extra compliance at the rear. 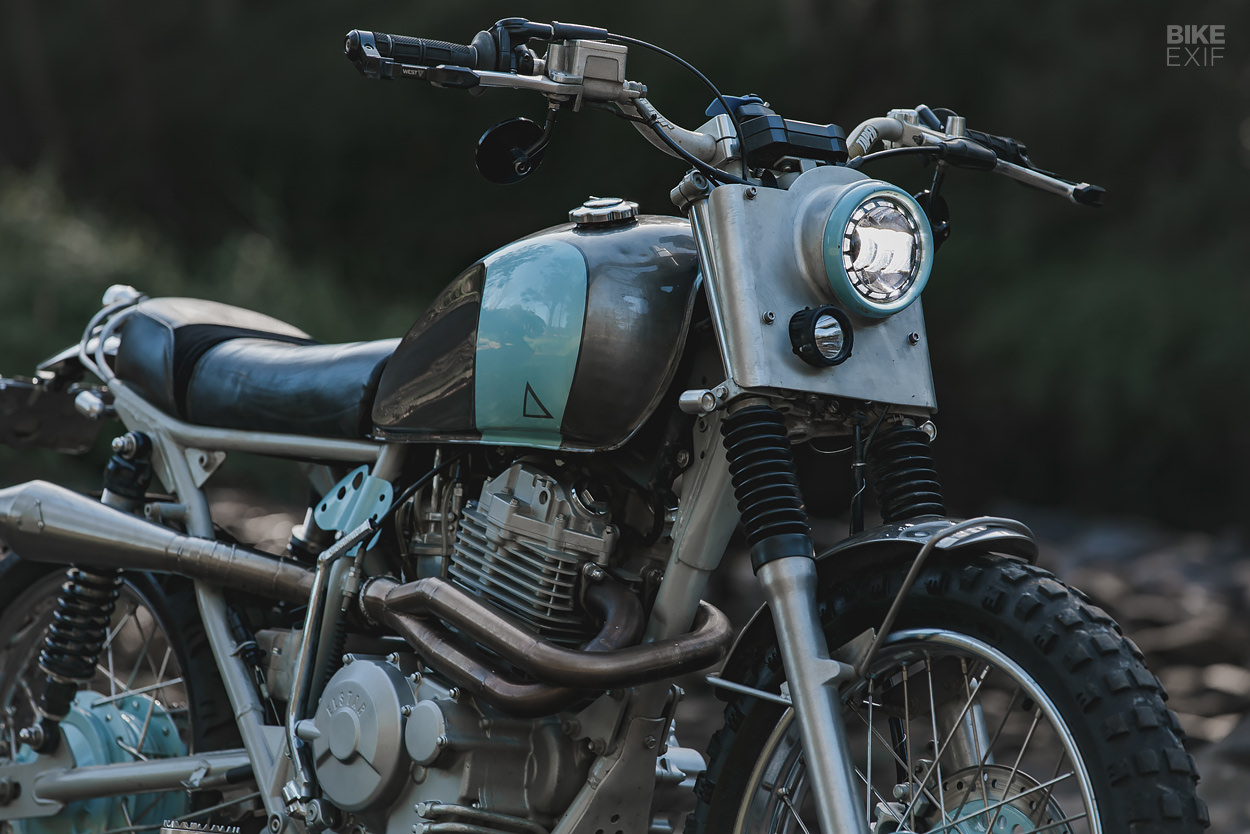 Up front, Tom left the stock forks alone, but fitted a new rolled aluminum fender with adequate tire clearance. It’s mounted on hand-made round-bar braces, styled after those on classic desert sleds.
Higher up, the headlight was swapped out for a 4.5” LED, sitting ‘in’ a custom made aluminum nacelle. It’s all neatly integrated, with the headlight bezel welded in, and an additional spot acting as a high beam. 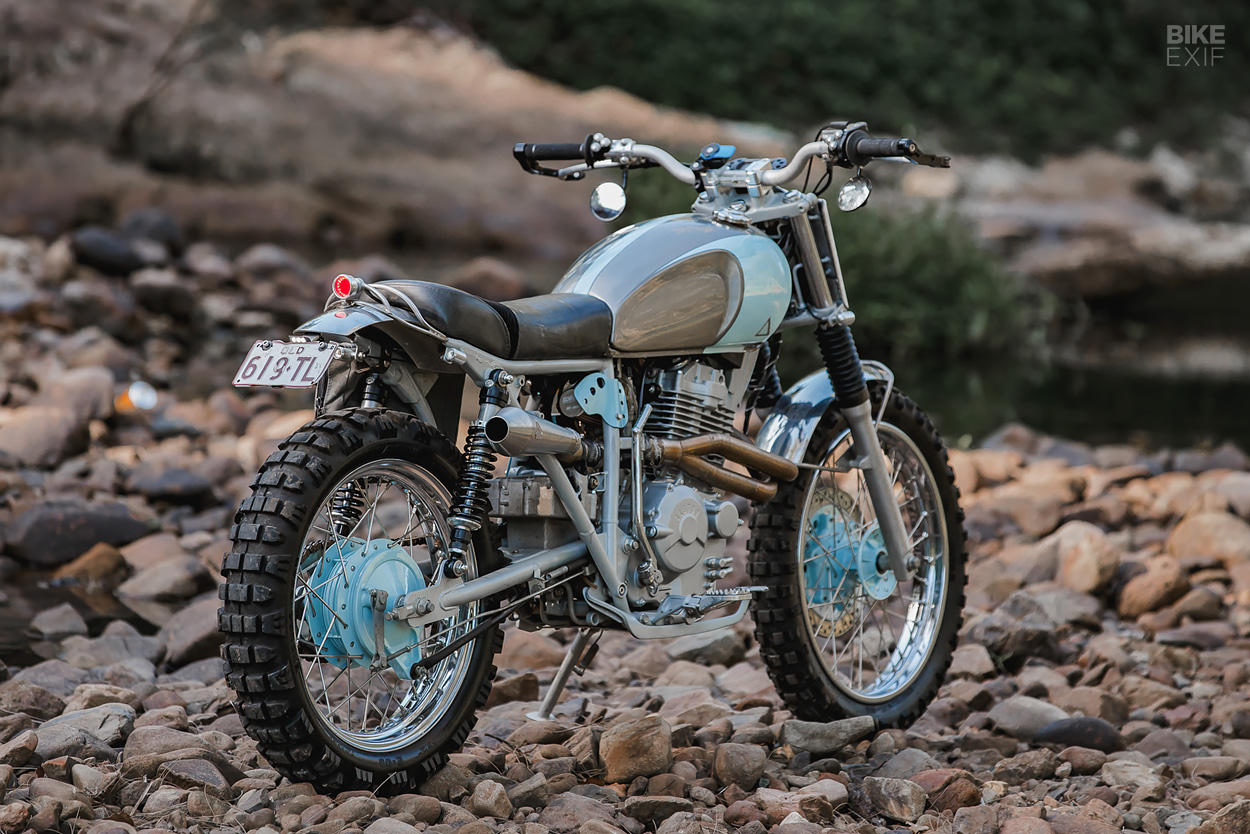 Tom left the Sol Invictus tank alone, but tweaked the rear of the bike with a unique cut-and-loop job. Instead of using a size-matched tube, he turned some bosses into the frame ends, tapering them down to fit 8 mm stainless steel bars. The rearward loop holds the fender and taillight, while the forward loop acts as a grab rail for dragging the bike out of trouble.
“We used that a lot when we got lost on the ride trip,” quips Tom. 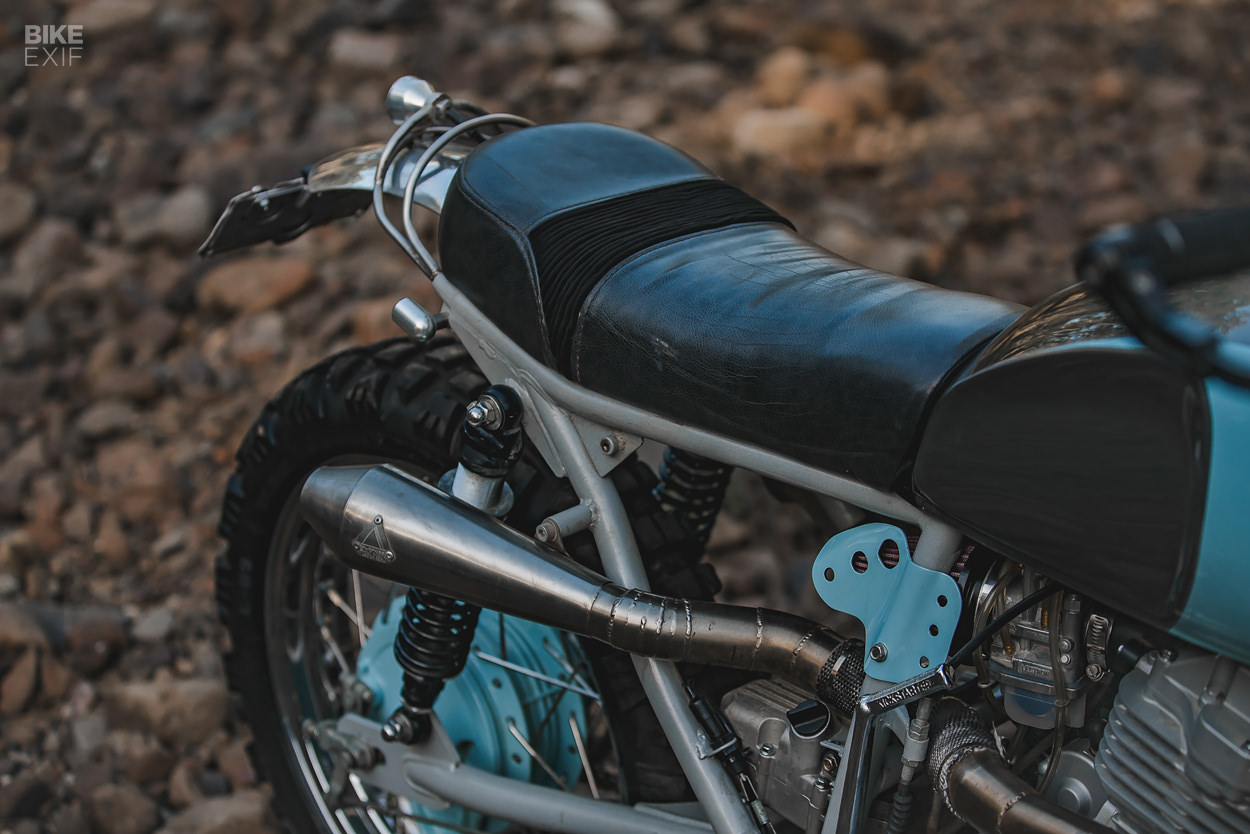 The seat pan was laid down in fiberglass, and covers a near-invisible electrics tray. This hosts a Black Box module, which the lighting system is wired into. A polished Orbit taillight provides lighting out back, and there are tiny LED turn signals all-round (tucked in to survive a few falls).
Comfort was high on the list, so Tom made sure the seat had a decent dose of foam, before sending it to Timeless Autotrim for a vintage grey leather cover. That darker area you see is a neatly pleated Alcantara ‘gripper pad.’ 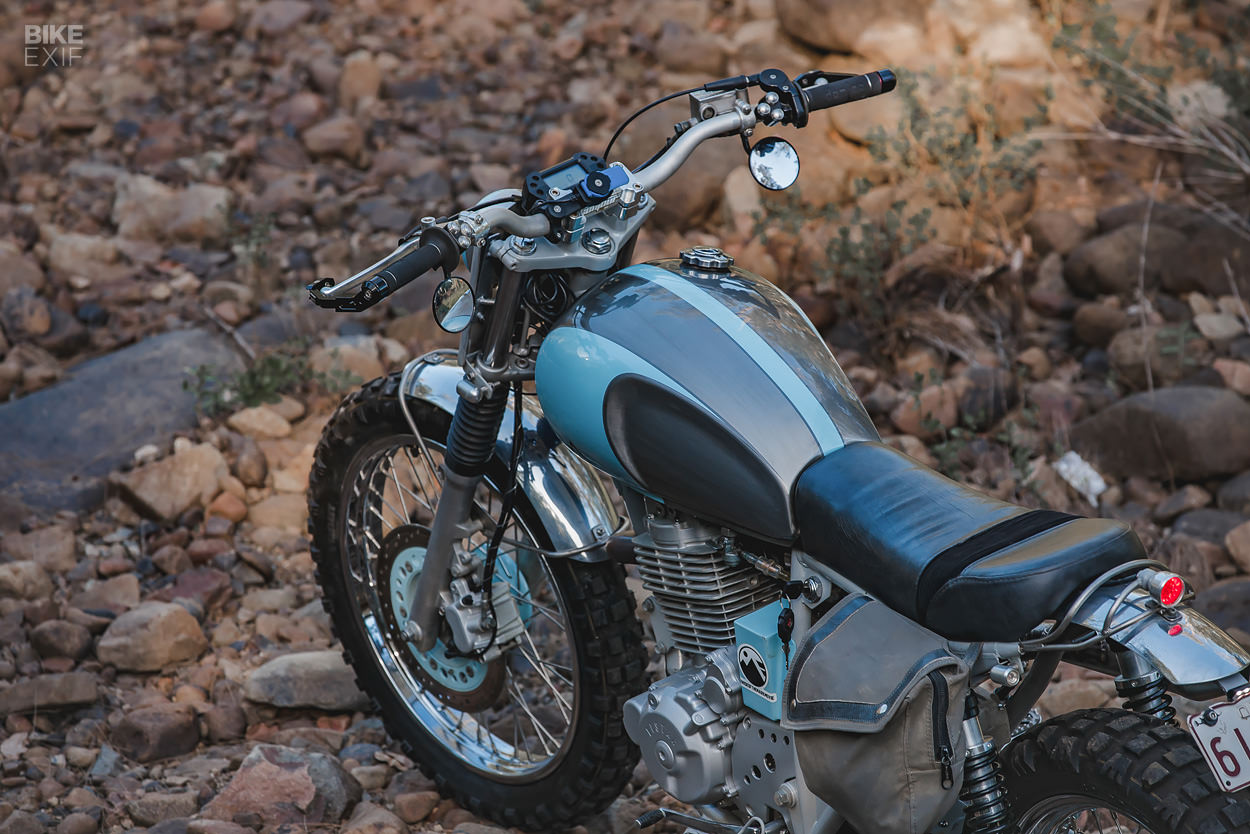 Just as much ergonomic consideration went into the cockpit. Tom added 20 mm risers and mid-rise ProTaper bars, along with PBM’s own design push buttons, and a throttle and grips from Domino.
There’s a phone mount too, and a set of PBM mirrors. “They’ve become extremely popular with garage builders—and a couple of sneaky pros—on all types of builds,” Tom tells us. 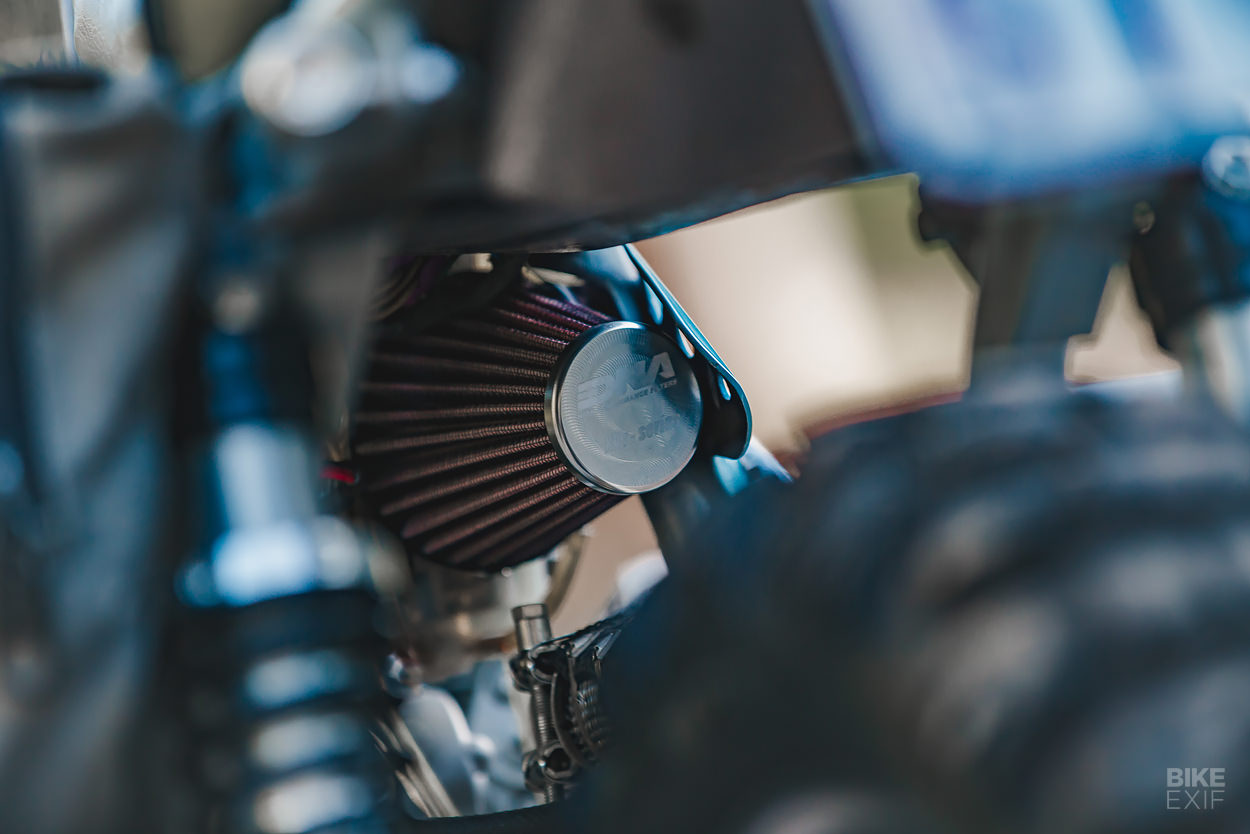 Tom wanted to squeeze more power out of the Sol Invictus, so he fitted a Lectron carb with a DNA filter. It made a significant difference, but it was a mission that involved replacing the intake with the boot from a Honda XR600.
The exhaust consists of custom stainless steel headers, snaking through the frame to exit via a single torpedo muffler. The inside of the muffler’s been scalloped to make space for the frame, keeping the whole arrangement slim. 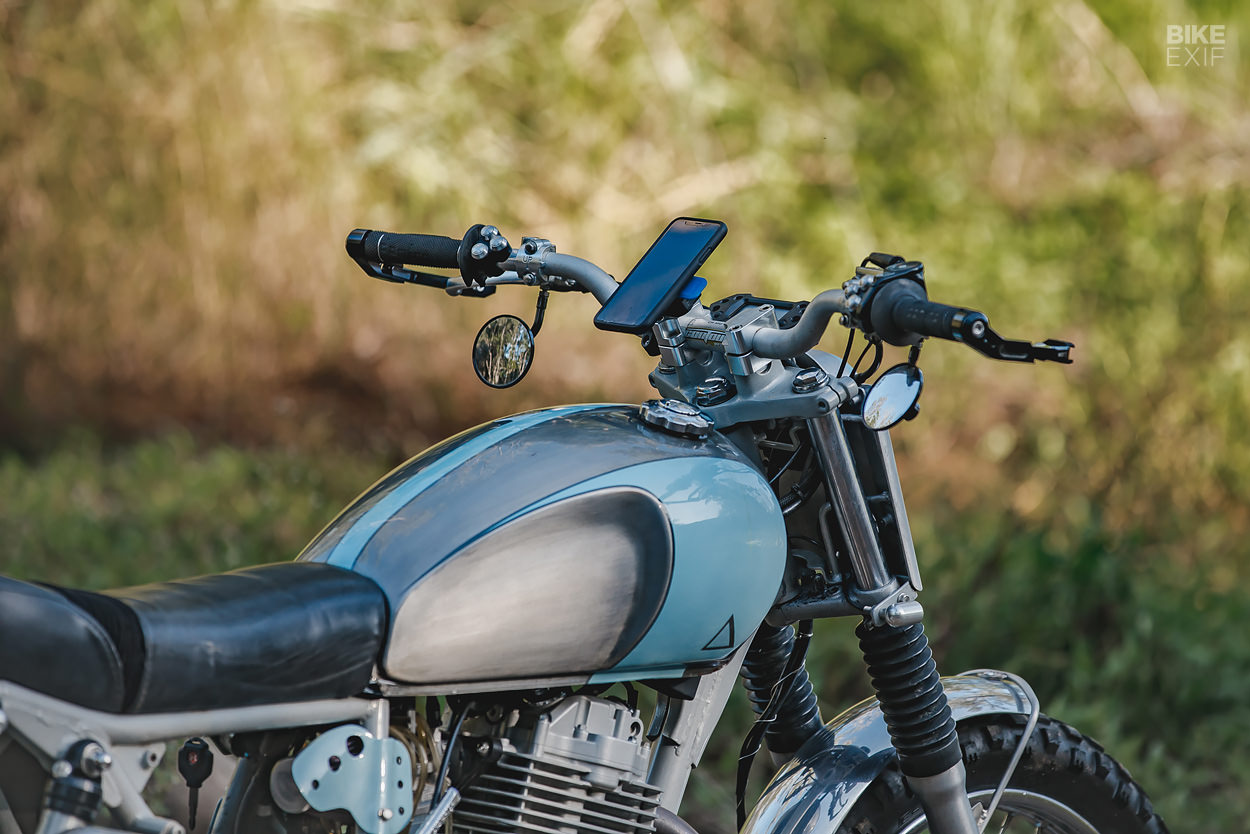 With the bike all buttoned up, it was time for Purpose Built Moto to complete the design with a color scheme. “I’d already chosen the vibrant sky blue in the first few weeks of the project,” says Tom. “Before the wheels built the hubs were painted. So I was locked into that color.”
“The blue was a bit of a gamble for me—it’s not an overly masculine or tough color, but it works. And if you’re man enough to get over the fact your bike’s baby blue and enjoy it for what it is, that’s the kinda guy we should all aspire to be.” 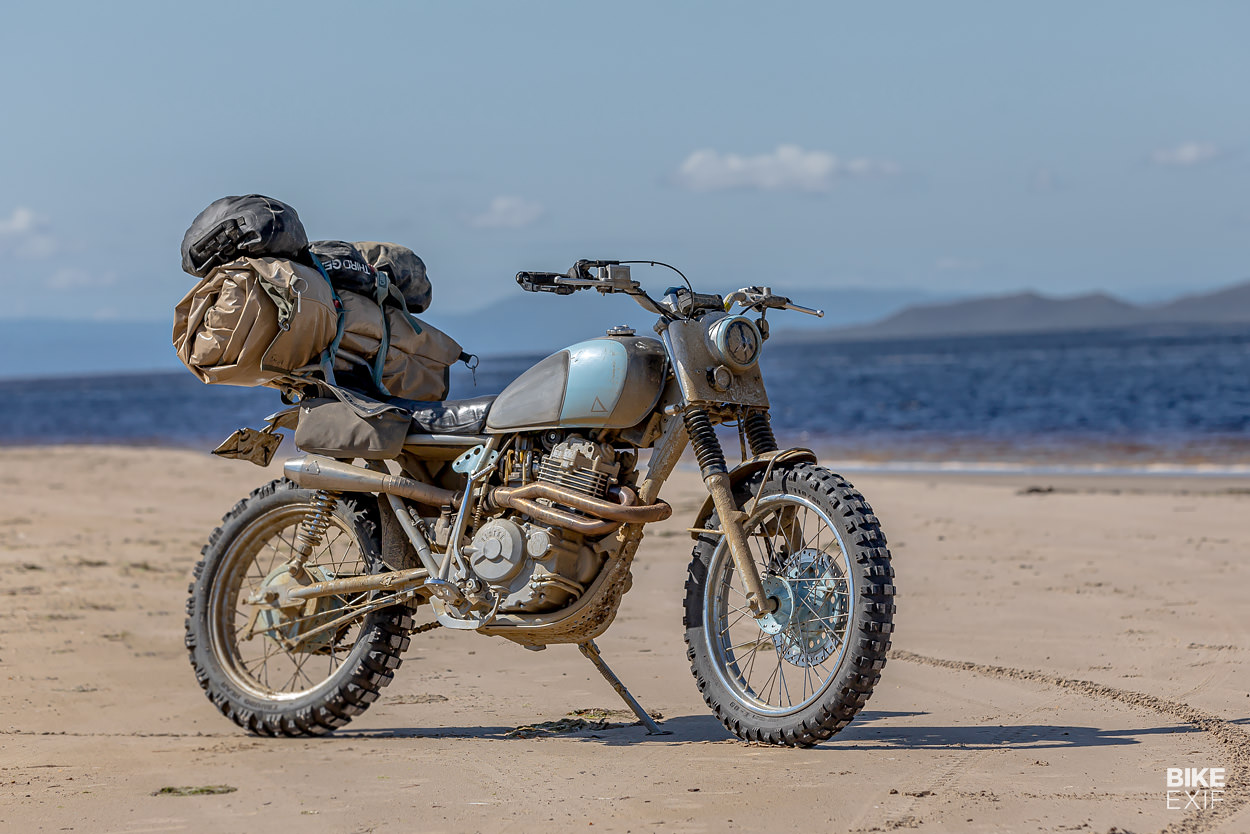 Tom and the scrambler’s owner, Jake, filmed the entire build as part of a YouTube series. But when it came to the Wide of the Mark film, it would be piloted by Emma McFerran—a freestyle motocross specialist who has also ridden for the Crusty Demons and Nitro Circus.
Before the trip kicked off though, the crew treated the scrambler to a proper shakedown. And it’s just as well they did because the forks and clutch immediately stood out like weak spots. So the front end was fitted with heavier-duty progressive springs, and the clutch upgraded. 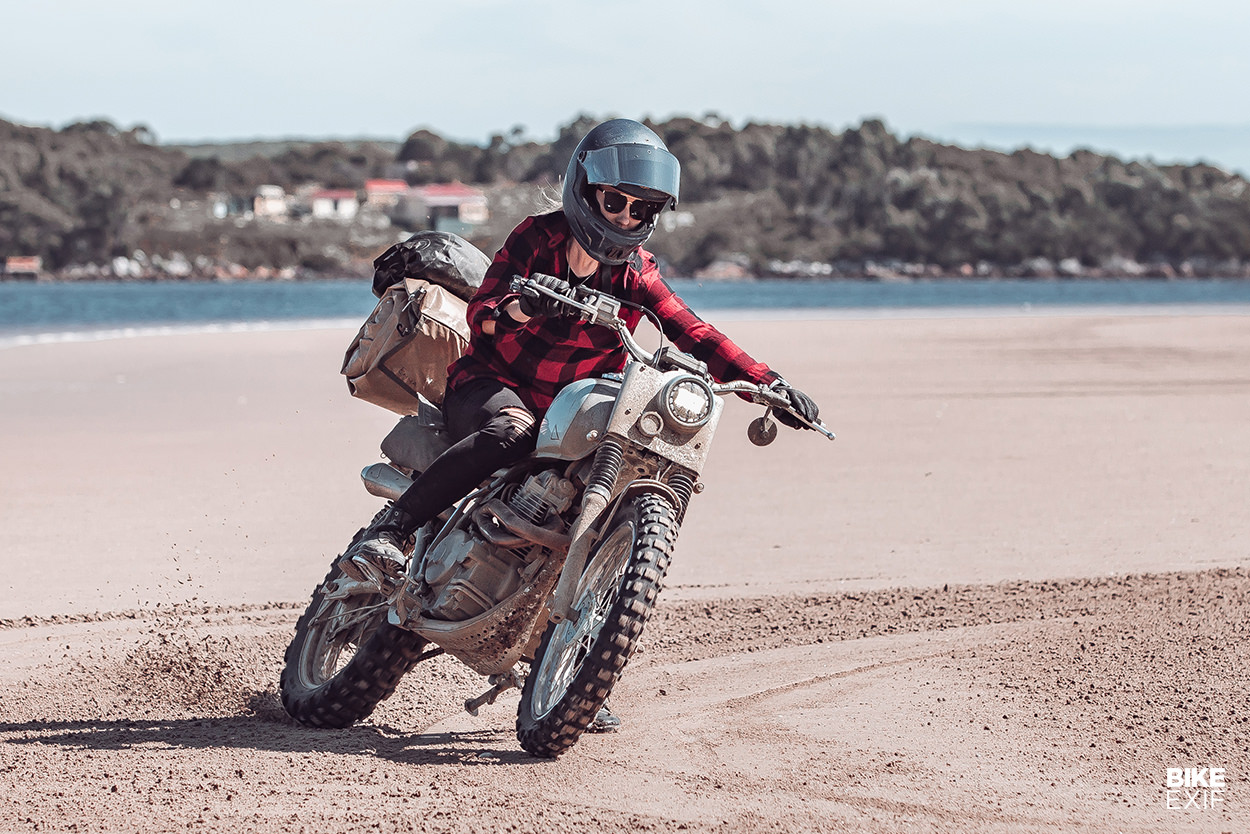 On the trip itself, the bike did the job, albeit with a few niggles and a number of on-the-go repairs. But ultimately, Tom’s chuffed with its performance.
“Being the lightest bike on the ground at 160 kg, and piloted by one of our most experienced riders, the Nemesis proved itself time and time again.” 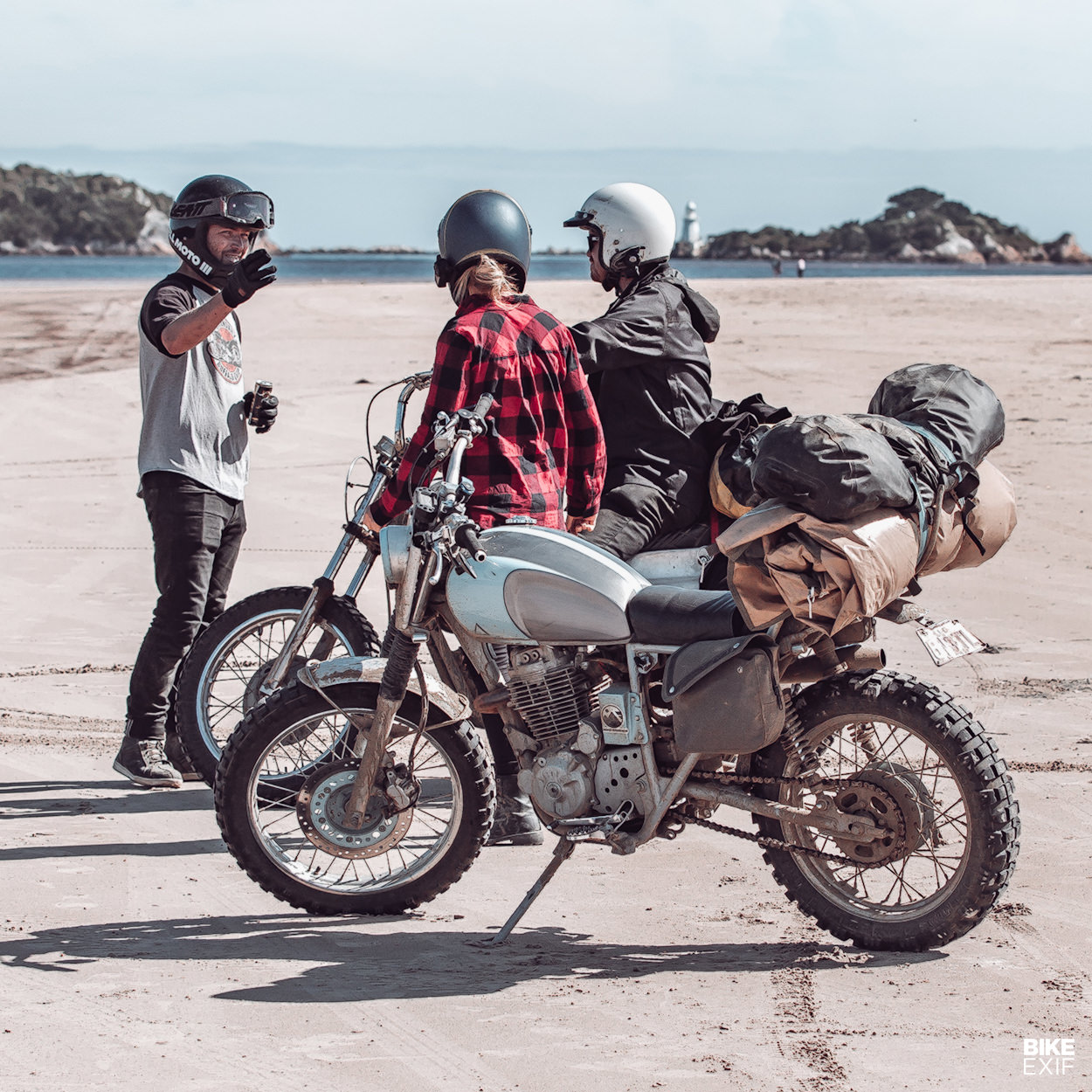